Vegetarians and faint of heart, go down to the last paragraph or join us tomorrow for another fresh post 🙂 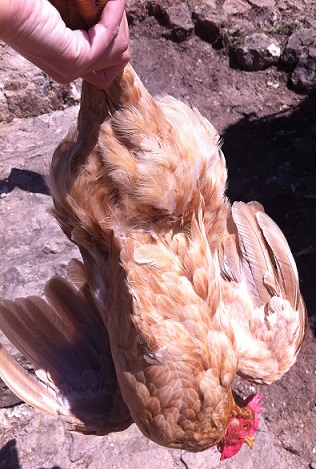 I don’t know if I am really proud of it, but kind of, so yay for being a killer I guess. I have been talking for quite some time around here about how I want to own my decision of eating meat, and kill the chickens from my coop myself, instead of expecting them to magically appear in my kitchen, plucked and emptied from their organs. In real life, it has taken me a year to gather the strength to kill one of them. For my defense, we have only eaten a couple of them so far, because with the heavy rain, the hens are not laying eggs that fast, and we were concerned about waiting for the next generation to be laying before killing the old ones. Out of 10 initial hens, 4 died of unknown causes and one was eaten by a wild animal, leaving us with 5 adults only.

The first one to go was “the little black one”, because she was mean to everyone around her. The handyman killed her as I watched and learned. There are two schools of killing if you would like to know. The first one is to cut the head with a machete, resulting in a blood bath but probably less suffering for the animal, and the second one is to wring the neck until it breaks, which requires a bit of strength and nerves of steel. We went for the second approach. Little black one was soon killed, and since I never liked her in the first place, it was not that painful.

A week later, it was my turn. BF, who always loves to challenge me, declared it would be the perfect day to kill not one, but the four remaining old ones, as they were not laying eggs anymore, they were just freeloaders and we could freeze them anyway. Why, ok, let’s go from white handed virgin to serial killer while we’re at it…

I went to get the first one, aptly named Lunch. The poor thing was one of the first hens to have joined the coop, together with Breakfast, who was on death row that day too, and Dinner, who had died a few months back after getting drenched by the rain on a cold day. Probably the flu.

Anyway, I liked Lunch, and didn’t want to see her suffer. I grabbed her legs in my left hand, put her head down, and with the right hand, started pulling in order to break her neck. I was really happy with the first pull, and thought I was done with the job, but the handyman told me she wasn’t dead, so I pulled and pulled some more. Nope. Not dead. Oh boy. I was really concerned now, for the poor animal had been half dead but not fully for what seemed like an eternity.

The handyman had to give her the fatal pull, and explain to me again. You don’t pull hard once, you pull steady for a minute or so, then the nerves tear apart. I was able to do another two myself but it was pretty hard to be detached when you have lived with the animals for a year. No one gets names in the next generation.

After the hens are killed, you need to plunge them in a bucket of boiling hot water, to relax their pores so you can pluck the feathers. This is a tedious job, and it smells like wet animal. The head has to stay down so the blood drains in the rest of the body. Once the animal is plucked, you can cut the head and remove the bits of blood.

After that, you open a whole around the rectum, and pull out the intestines of the chicken. That is the most disgusting part. Then you go find the heart, the liver, the kidneys and the throat, that you can eat. You need to clean them properly, and put them apart.

Last, you make a hole around the neck of the chicken to remove another bag where they keep their food, that you need to tear apart from the chicken. Another clean, and it is ready to go! 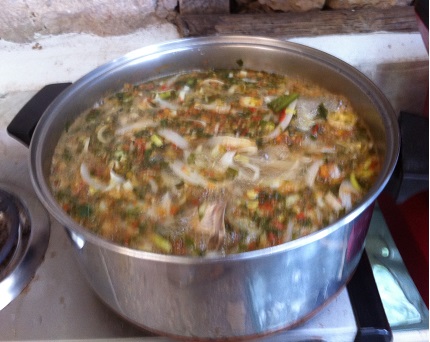 Cost of eating your own chickens

You can read about the cost of running a chicken coop here, where I crunch the numbers mostly about eggs. The thing is, we haven’t had eggs for a while as the weather has been cold and it looks like there is a disease in the village and many families lost all their animals. Thankfully, we gave ours a shot before going to Europe and none has died, but having no eggs means we spend $40 a month on chicken food and get no reward.

A free range adult hen or rooster costs $12-$15 in the village. Out of this, we make a soup with vegetables that lasts for two to three days, or six adult portions. It is pretty cheap but there isn’t a lot of meat either. A free range chicken is maybe half the size of a hormone pumped industrial chicken.

We have been without eggs or barely for the past 4 months, meaning it has cost us $160 and we got 5 hens, and 5 roosters, at a cost of $16 each. This is more expensive than buying our own, and this model is only viable when the hens reproduce and lay eggs properly.

During the laying months, we get free eggs, free chickens, and the eggs hatch to give even more chicks.

We were up to 40 animals from an initial 10, so this investment has quadrupled in a year, however, with the high cost of bird feed, I think we are barely breaking even if they don’t start laying soon.

Cost of eating a village pig

Another thing that we have been doing is buying a whole pig in the village and have the handyman and his girlfriend kill it and sell it back to us as meat.

Pork meat costs $3 a pound at the butcher’s, 6 miles away. You never know where the pig comes from, while the village pig has only been eating around in the village and is usually healthier.

An adult pig was for sale at $75, so we bought it and gave it to the couple to process it.

We said we would pay the same price to them, for 20 pounds of meat, we bought half pig: one leg, one arm, one rib and one filet mignon that goes along the spine. Our order was $60.

So the couple was left with half the pig to sell, which should bring them another $60, they need to give us back $15 to adjust the purchase price of the live animal, and keep $45, which is a pretty nice payday in the village.

On top of the other half, they also get to keep the head (pork tongue is a delicacy here), liver, heart, kidneys, and they fry the skin to make chicharrones, another loved dish here, that when you fry the skin releases a few gallons of fat, that is then sold for cooking.

Anyway, they were happy too, as they got to sell quite a bit of meat and kept the rest to make snacks for workers the next day and earn a bit more. Plus the whole family had pig meat all weekend, when they rarely eat meat.

For us, it seems like a neutral operation, we got to buy meat at market price, but we got better meat, we got dibs on the best cuts, and we also got to help our employees make a  little extra cash.

Would you kill your own meat if you had to or rather go vegetarian?

This post was featured on the Frugal Farmer, Budgeting in the Fun Stuff, thank you!

Planning for a secure financial future is a wise decision that you should make for your family. You need to be committed to building wealth and take charge of your money. By investing in the right ... END_OF_DOCUMENT_TOKEN_TO_BE_REPLACED

Cryptocurrency has become a popular investment option in recent years, as more people want to make profits from its white-hot rise. However, cryptocurrency investment is a risky endeavor. It is highly ... END_OF_DOCUMENT_TOKEN_TO_BE_REPLACED

Unsurprisingly, there are plenty of people out there jostling to help you spend your nest egg. All promise high returns, but not all that many deliver; in fact, you can quickly lose your super if ... END_OF_DOCUMENT_TOKEN_TO_BE_REPLACED

If you have recently taken up a position at a brand-new company and opened a 401k for the first time, you may be on the hunt for additional information when it comes to the various ways in which tax ... END_OF_DOCUMENT_TOKEN_TO_BE_REPLACED

Congratulations! You’ve worked hard this year. You made it through some tough days (or weeks or months). And now, if you’re lucky, you might end up with a holiday bonus. But before pocketing that ... END_OF_DOCUMENT_TOKEN_TO_BE_REPLACED

The United States of America is a destination most working professionals and travellers have on their list. Being one of the most visited countries in the world, it houses many tourist attractions, ... END_OF_DOCUMENT_TOKEN_TO_BE_REPLACED