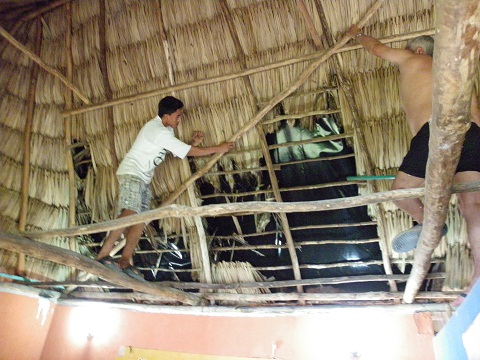 working hard on the roof

Before I moved to Guatemala, I was looking at houses in the South of France. For the same price, I would have gotten a run down house, that I would have had to fix myself. There I was, daydreaming about my carpenter self, my mason self and my architect self. Yeah, sure. Most likely, I would have ended up watching tutorials on Youtube, making a lot of costly mistakes, and resorting to a super expensive contractor after throwing the towel. I am not the manual type and as cool as it can be to say ‘‘I did it myself’‘, I was probably going to get tired of living in debris and dust and need help at some point.

Everyone has a price

It would have hurt though, to have to pay someone to the tune of $200 a day to fix my house. Here in Guatemala, $200 gets me a smiling, hard working handyman six days a week for a month. He set his salary himself and I didn’t bargain. Every day, for 8 hours, he can be found climbing on my roof to remove some scorpion-filled palm tree leaves, carrying construction blocks, trimming high trees, and a lot of things that I am happily paying to have someone do.

In Paris, I fixed three bicycles for my mum and the local sports store was charging $20 to change a flat tire. It cost me $4 to buy a new air chamber and half an hour of my time. Last week a mechanic charged me $8 to work for an hour on the car and change a valve. I wouldn’t spend half a day checking out the manual to save $8.

We all have a price at which we would rather do things ourselves than pay for help. I have no real data but I would say that your hourly wage could be your price. If you earn more at your job while someone works on your car or fixes your house, you will likely pay for the convenience.

Have I turned lazy?

The short answer is yes, a little bit. I think I would have done twice as much as what I did during that last month, if there was no one around to help me. I would still have needed the basics, a roof that doesn’t leak, a house that is bug-free, some mosquito nets… And maybe, after a few months, I would have tackled other projects. It would have been lengthy and I am certainly paying for my time and the convenience to let others do it. Since the price of labor is so low, it really feels like money well spent.

There are some things that I am not ready to delegate. When I lived in Guatemala City a few years back, I had a maid. She was cooking and cleaning for me. I hated it. Of course, it is nice to have someone do your bed and tidy up your stuff, but there is always a presence in your house, you can’t do whatever you please, like having a soapy movies and ice cream marathon on the couch on a weekday while the poor maid is dusting around.

Another thing I didn’t like was her cooking. I would buy a tender piece of steak to grill for lunch and would find her cooking it at 10am, then overcooking it half an hour before lunch. No matter how many times I asked, I never got a medium rare steak. My BF has caught many maids stealing. One even had a shrine with personal objects of him and his family in her room! I like to leave my things in the open and don’t want to have to count my money every time I come back home.

Sometimes, I think it is stupid to spend my time cleaning and cooking instead of developing my land and using skills I studied five years to acquire. But rich people overdo it here, and many kids grow up mostly with their nannies. Maybe I will hire a maid once a week to have a good clean up, and wash our clothes, although I do have a lot of free time in my hands and as long as my days aren’t filled with other activities, I don’t really see the point.

I can choose to do what I like, for example the cooking, and hire someone to do what is too hard or too boring for me. The builders are currently bringing 5000 stones to build our new house. My back and hands are worth more than their wages.

I can spend time writing, socializing, or just doing nothing. Like any other spending, it is a conscious decision to allocate my money on something that matters to me. And, well, I am a bit lazy.

If you could afford help for almost everything, would you go for it?

Planning for a secure financial future is a wise decision that you should make for your family. You need to be committed to building wealth and take charge of your money. By investing in the right ... END_OF_DOCUMENT_TOKEN_TO_BE_REPLACED

Cryptocurrency has become a popular investment option in recent years, as more people want to make profits from its white-hot rise. However, cryptocurrency investment is a risky endeavor. It is highly ... END_OF_DOCUMENT_TOKEN_TO_BE_REPLACED

Unsurprisingly, there are plenty of people out there jostling to help you spend your nest egg. All promise high returns, but not all that many deliver; in fact, you can quickly lose your super if ... END_OF_DOCUMENT_TOKEN_TO_BE_REPLACED

If you have recently taken up a position at a brand-new company and opened a 401k for the first time, you may be on the hunt for additional information when it comes to the various ways in which tax ... END_OF_DOCUMENT_TOKEN_TO_BE_REPLACED

Congratulations! You’ve worked hard this year. You made it through some tough days (or weeks or months). And now, if you’re lucky, you might end up with a holiday bonus. But before pocketing that ... END_OF_DOCUMENT_TOKEN_TO_BE_REPLACED

The United States of America is a destination most working professionals and travellers have on their list. Being one of the most visited countries in the world, it houses many tourist attractions, ... END_OF_DOCUMENT_TOKEN_TO_BE_REPLACED