Morning! After we visited Northern Spain and went to Santiago de Compostela, we kept driving South to Portugal and followed this itinerary: 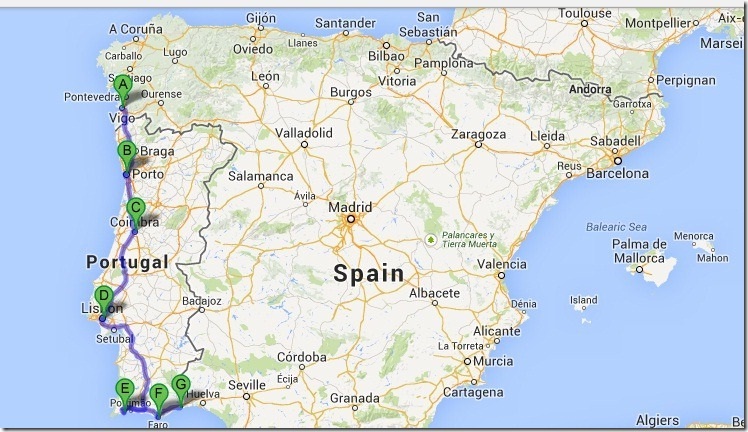 The first stop was Porto, the second town of the country, it was bright and sunny and we had a great lunch of pork roasted in a wooden stove with green wine, that is a young bubbly wine that as far as I know only Portuguese make, and I really like it. Porto has a beautiful historical center built on several hills overlooking the river, and by the riverside lots of small shops and restaurants. It was back to college week and lots of college students were going through hazing trying to involve the tourists in some games or magic tricks. 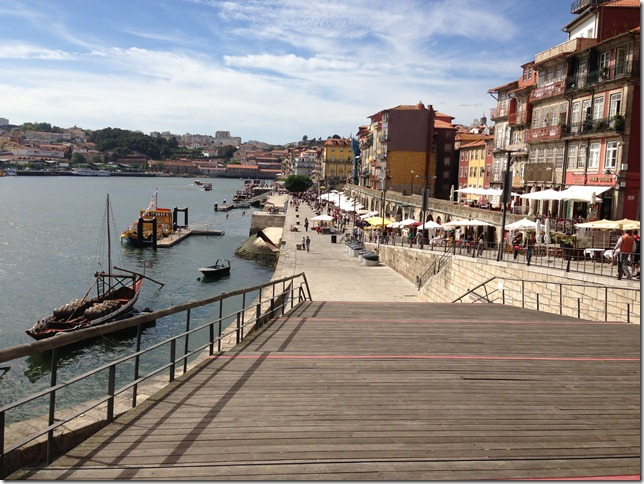 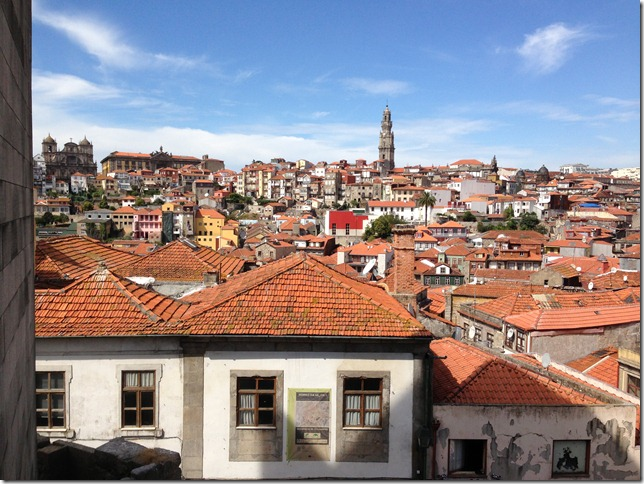 We spent the night in the college town of Coimbra, that is home to one of the oldest universities in Europe. It is a steep walk up hill to the old university buildings but we didn’t dare ride the bike through the narrow medieval streets. 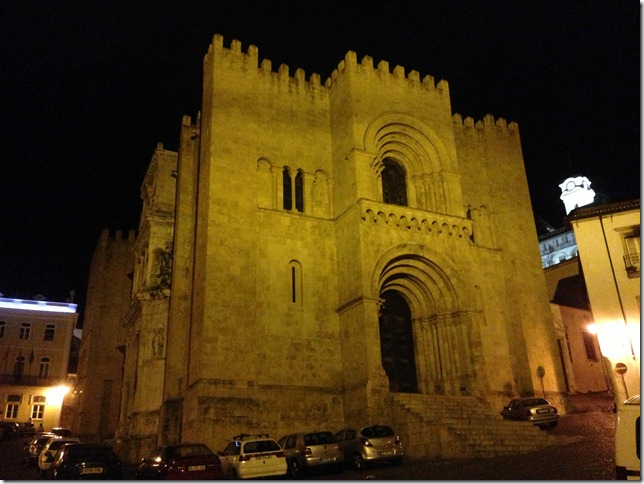 We had a nice hotel on a lively square where they played live music at night.  I had an early morning run among drunk students and empty cans of beers up the hill to the University, and got lost on the way back, while the heavy rain refreshed me and made me think about the road ahead, it is not fun to ride a bike under the rain. 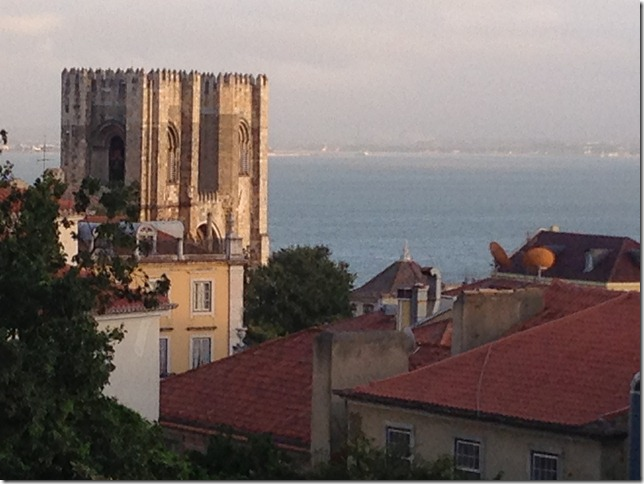 Our hotel choice was not so good in Lisboa, where we ended in a pretty depressing family guest house, but it forced us to spend as much time outside as possible and we really enjoyed the city, from the panoramic views of St George castle over the Tage river to the neo classical center of town rebuilt after a big earthquake, the small fish eateries, the river walks… everything was perfect. 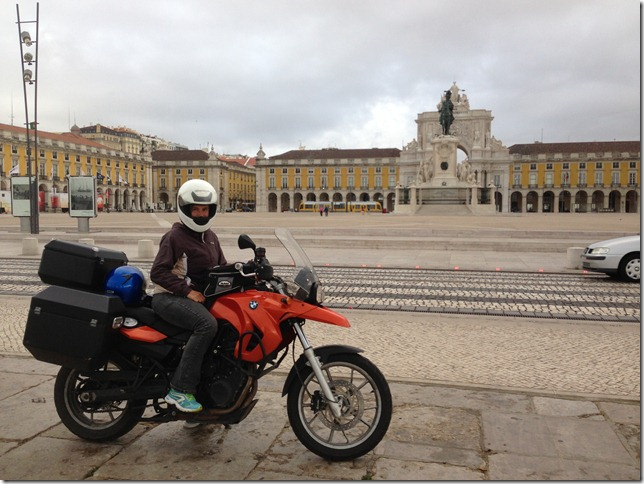 We took one of the longest bridges in Europe to continue South to the region of Algarve, home to beautiful cliffs and beaches nestled in between. That was the perfect setting for a run, this time with the sun,

and after having a disappointing lunch in a tourist trap, we ended in a local restaurant at night and were able to truly taste the cuisine, among which a fabulous octopus salad and grilled meat. The normal entrée in Portugal is good enough for two, but we were used to tourist portions and it was hard to leave an empty plate at that place. 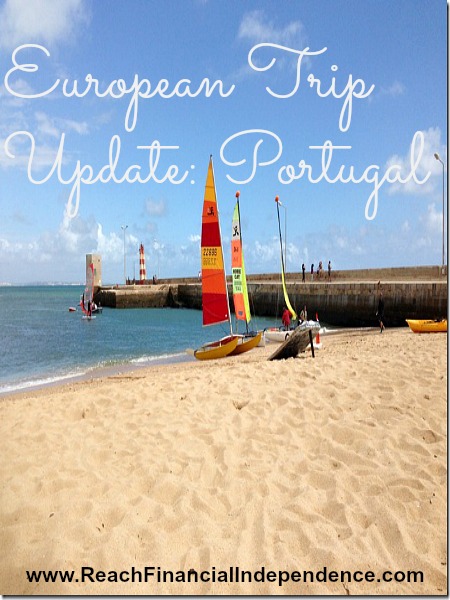 Before we got to Spain, we spent the day visiting several lovely villages in the region, although Faro was not worth all the fuss in our humble opinion and we exited quickly. We found an aparthotel in a depressing little town near the border called Monte Gordo, which was long deserted by the summer tourists, so just empty streets and closed restaurants, but we were a block from the beach and the hotel was really good. You can score fabulous deals if you go off season, and at the beginning of October the weather is still great for exploring around, for example we got a couple of 25 euros hotels with breakfast included, one even had a swimming pool. 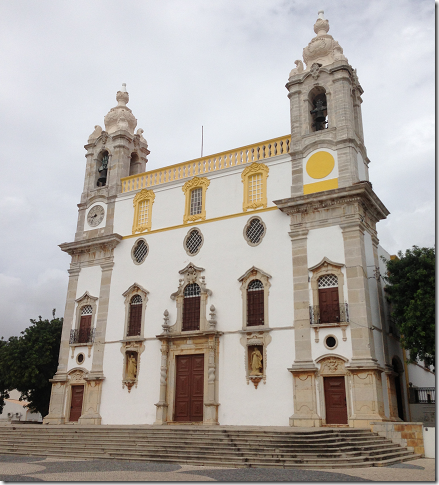 We enjoyed Portugal as it was really authentic, like the North of Spain, it is mostly a rural country and the countryside is beautiful. You can travel on a budget, and still be comfortable. BF couldn’t believe it when I bought a pound of pears at the market for $0.4. The fruits and vegetable are cheap and delicious, with a piece of ham, some cheese and a loaf of bread, you are set for a great picnic. On the bike we didn’t carry much food and generally ate a “menu del dia” or meal of the day at a restaurant, thanks to the copious portions, only a snack was needed for dinner, or we would go for ice cream.

So far, we had been on a 100 euros ($130) a day budget for the two of us, in Portugal it may have been slightly less, although the toll roads were expensive, and so was gas for some reason. Maybe it is the state’s way of getting more money they don’t get via income tax. We didn’t feel the crisis too much, Portugal is one of the looked-down PIGS (Portugal, Italy, Greece and Spain) that are accused of slowing down the European Union, on the contrary, what we saw was a country full of hard working people, who may be earning less but are more resourceful, and pretty self sufficient.

That’s it! Next, we cross the Spanish border again, off to Sevilla and the ferry boat to Morocco.

This post was featured on the Inspirational Posts, Mom and Dad Money, Your PF Pro, thank you!

Planning for a secure financial future is a wise decision that you should make for your family. You need to be committed to building wealth and take charge of your money. By investing in the right ... END_OF_DOCUMENT_TOKEN_TO_BE_REPLACED

Cryptocurrency has become a popular investment option in recent years, as more people want to make profits from its white-hot rise. However, cryptocurrency investment is a risky endeavor. It is highly ... END_OF_DOCUMENT_TOKEN_TO_BE_REPLACED

Unsurprisingly, there are plenty of people out there jostling to help you spend your nest egg. All promise high returns, but not all that many deliver; in fact, you can quickly lose your super if ... END_OF_DOCUMENT_TOKEN_TO_BE_REPLACED

If you have recently taken up a position at a brand-new company and opened a 401k for the first time, you may be on the hunt for additional information when it comes to the various ways in which tax ... END_OF_DOCUMENT_TOKEN_TO_BE_REPLACED

Congratulations! You’ve worked hard this year. You made it through some tough days (or weeks or months). And now, if you’re lucky, you might end up with a holiday bonus. But before pocketing that ... END_OF_DOCUMENT_TOKEN_TO_BE_REPLACED

The United States of America is a destination most working professionals and travellers have on their list. Being one of the most visited countries in the world, it houses many tourist attractions, ... END_OF_DOCUMENT_TOKEN_TO_BE_REPLACED