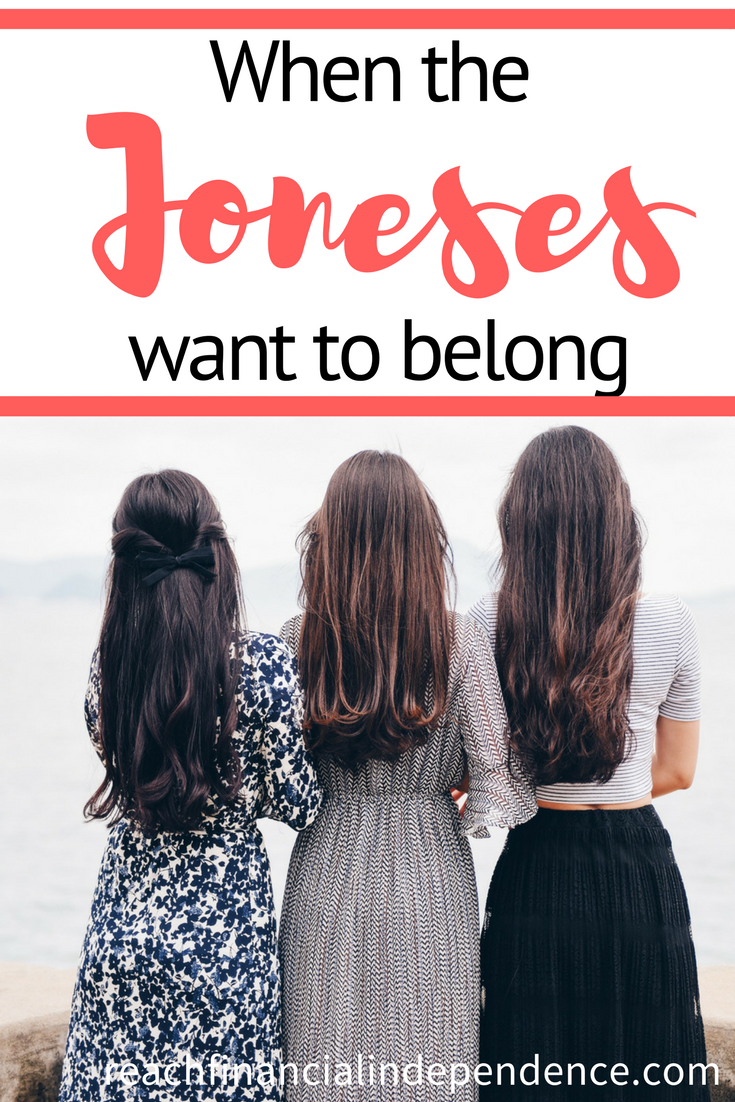 Why do the Joneses often have the urge to bully us to go “up” to where they are?

When I was a kid, my dad lost his job. In hindsight, it was not a big deal, we kept going on holidays, I still had piano and horse-riding lessons, we still attended one of Paris’ most expensive private schools and lived in a prestigious neighborhood. But my parents gave us a big scare, making it look like we were about to be homeless if we didn’t turn off the lights and used too much toilet paper. I believed it and never asked for anything. I remember my mother consulting my dad about a $20 winter coat I really needed as I outgrew the previous one.

Kids at the private school were harsh. If you didn’t have the latest fashion, they’d ask “Are you poor?”. I was just a tween but decided to get jobs to pay for whatever I wanted. Between baby sitting gigs and piano lessons, I was pulling at least $500 a month, which was a ton of money compared to the rich kids’ allowances. I bought a few clothes, then decided trying to look like them wasn’t worth my hard earned money. Still they would pressure me to go on shopping sprees with them. I always had the excuse that I had to work, but they really wanted to push anyone to do the same they did.

Ten years later, I was sitting at my desk eating the lentil stew I had made the previous day for dinner. It was yummy and the perfect comfort food for a cold winter. My boss came near, looked at my plate, made a disgusted face and said “I should really give you a raise if you are down to eating that kind of crap”. Then the rest of the office proceeded to have a processed triangle sandwich and a bag of chips, washed down by a can of soda. Not only lunch cost them five or ten times what mine did, it was also full of chemicals and other bad ingredients, you could indeed call “crap”.

I could avoid being the black sheep and get a sandwich, or I could keep on bringing my lunch to work, hand my resignation a year later, and enjoy a leisurely life under the Guatemalan sun while they’d stay in the gloomy office until they’re 65. I chose the latter.

Why do the Joneses want to drag you into their little circle so bad? Why can’t they live in peace with all the stuff they have and their like minded peers?

A couple of friends are miserable having had babies too soon, and having married just because Cosmopolitan said your life was ruined if you weren’t married by 28. Like, depression, pill-popping miserable. Yet, instead of admitting they made a mistake, they bug me all the time about when I am getting married and starting to reproduce. I wish I were mean enough to say “when I look at you, I feel like it’s never going to happen”… Although I hope to find a life partner some day, and maybe start a family, I will never do it because my friends do. It is the same with money and life.

When I think about it, people are afraid of what is different. They try to scare you into not doing it, so you can keep being average just like them. Their fear can manifest differently, from fake “I care about you, you shouldn’t do that” advice, to plain sabotage of your plans.

Just like the bucket of crabs preventing the one smart crab from escaping by dragging him down.

When I prepared for a round the world trip in college, I tried to save as much money as possible during the last year. I was ridiculed, threatened that my degree would be worthless when I’d be back, and told all kinds of travel horror stories. Few people said “I wish you the best”. Those are the ones I remained friends with 12 years later.

One of the best reactions was “I think that is a great project for you. I could never do it myself for XYZ reason, but I am sure you will succeed because you are meant to do that”. Person emphasized, even though it was not their cup of tea at all, and sent good vibes.

The Joneses? They were plain angry when they heard my plan. “What? you’re going to have no house for a year? no car? how can you do that?”

It takes strength to walk to the beat of your own drum, but when you are happy and satisfied with your life (also heard from the Joneses “wow, you are glowing, you look so happy. When are you coming back to corporate life and getting a real job?”), why do people have to insist you become the unhappy person they are? They want to belong so much it terrifies them to see someone could actually bloom in another lifestyle.

What do you think? If we are all different, who in his right mind would target being average as a goal?

Congratulations! You’ve worked hard this year. You made it through some tough days (or weeks or months). And now, if you’re lucky, you might end up with a holiday bonus. But before pocketing that ... END_OF_DOCUMENT_TOKEN_TO_BE_REPLACED

The United States of America is a destination most working professionals and travellers have on their list. Being one of the most visited countries in the world, it houses many tourist attractions, ... END_OF_DOCUMENT_TOKEN_TO_BE_REPLACED

When you were a kid, did you ever save quarters in a jar? Or set aside a portion of your allowance in a piggy bank for a big purchase, like a bicycle, a pair of designer shoes, or anything that mom ... END_OF_DOCUMENT_TOKEN_TO_BE_REPLACED

No matter where you are in your career, the potential of eventually retiring can be a daunting experience to think about. Are you saving enough for the future? If you are, when will you have enough ... END_OF_DOCUMENT_TOKEN_TO_BE_REPLACED

“Open an account with us – and get a free toaster!” These days, the bank toaster (clock radio, electric blanket, or other gadget) has become a cliché for consumer banking. But what you might ... END_OF_DOCUMENT_TOKEN_TO_BE_REPLACED

Watermelon. Corn-on-the cob. Fireworks after sundown. Amid all the fun, it’s easy to forget that the Fourth of July is more than just another summertime barbecue: It’s a reminder that independence is ... END_OF_DOCUMENT_TOKEN_TO_BE_REPLACED