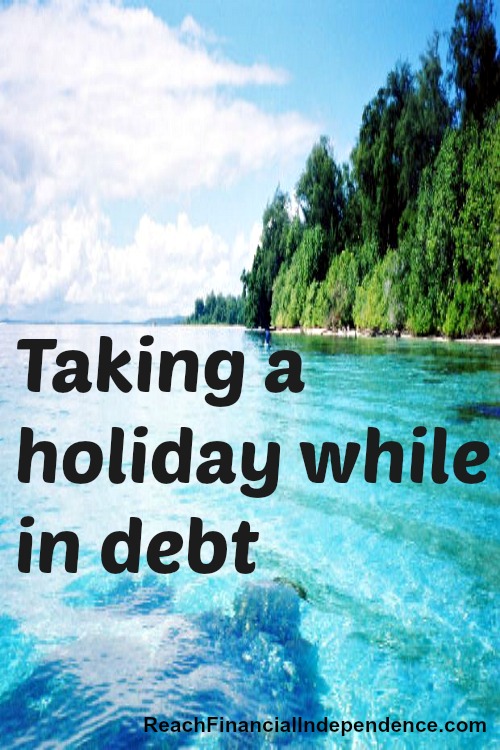 There has been a lot of talk lately around the PF-sphere, about what people should and shouldn’t do while in debt. In the first camp, the debt-free extremists argue that you should stop living until you have paid off all consumer debt, and send every bit of extra cash towards your debt snowball. On the second camp, the YOLOs argue that life is meant to be lived (once), and you should not deprive yourself because you are in debt. Let’s have a look at the numbers.

Say our family of four is $20,000 in consumer debt, a notch above the average American credit card debt of $15,950, according to CNN. And their debt carries an average weighted interest rate of 15% (CNN says mid to high teens). They are considering a one week holiday, and could either opt for their usual holiday, take a cheaper one, or wait until they get out of debt.
Debt specifics

Taking a usual holiday while in debt

Our average family is taking the YOLO approach and wants to go to Disneyland. According to My Money Design, it will cost them $6,000 for the week. Since they have learned their lesson about not financing new stuff, they saved for it for a year, at $500 per month. While very noble, those $500 stopped earning them the 15% p.a.it would if they had paid their credit card, then financed the trip on a 0% card and paid it over the next 12 months. Or even accrued their $20,000 card balance. Since they are so diligent about finding $500 to go on holiday, once they have gone, they can keep making the $500 extra payment on the card and get out of debt sooner.

By keeping the minimum payment and saving for the holiday, they will stay in debt until 2047, and have one Disney holiday to show for.

* I know the principles but am not smart enough lazy, so Bankrate made all the calculations. If you have a disagreement, ask them.

Taking a cheaper holiday while in debt

Our average family still wants to go on holiday, but follows one of my awesome travel tips to get more bang for their buck while doing it. They buy a $80 America the Beautiful National Parks pass, that gives them free access to all National Parks and more beautiful attractions for a year, use a Home Exchange network or Couchsurfing to stay for free, or stay with friends and family, and bring picnics to the park. Let’s say they still need to pay for a couple of nights in a motel on the way to/from their destination ($200), gas for their car ($200) and visit a few paying attractions, or have a couple of diners out ($220). A whole week of fun for $700. I did not account for groceries since they would eat at home anyway. 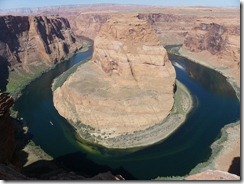 Sure, the kids may not see Mickey Mouse and have no bling to show off to their friends when they come back. But this is as good a vacation as any. Without even saving for it and charging the whole $700 on their card, they would delay their debt-free day by a couple of month if they kept the minimum payments going (still around 2047 but who cares if it is July or October?), or could be debt free in just over two years if they put the $950/month towards debt like they would for a Disney holiday.

Taking a holiday until you are debt-free

Assuming they are able to save those $500/month for a holiday, how about they put it towards debt straight away? They would get out of debt in two years, then when the debt is gone, keep the $500 payments AND the $450 that used to go towards debt, to take a holiday in six short months.

Time to save for the holiday afterwards 6 months.

They could have a paid for holiday in 31 months, and live happily debt-free ever after.

I have never carried consumer debt, so I couldn’t judge the urgency to take a holiday while in debt. I would still express concern if someone on a diet had an urgency to eat a family sized pizza. If you are trying to break a vicious debt circle, you shouldn’t go on holiday, or it will be ‘’it’s just a holiday’’ followed by ‘’it is just a $500 handbag’’ and so on. If this is a mature decision and you understand the implications, go and have a blast.

My financial goal was to reach financial independence and save aggressively, and that could be compared to extreme debt repayment. Every day I would spend in the office would be one less day towards my goal and every non essential item I would buy would take me away from that goal. I never gave up traveling while doing this because I did it on the cheap, generally my job would send me somewhere and pay for the flight, and I would stay there a couple more days, crashing with friends in exchange for buying them dinner. I also started writing for a few travel blogs that would cover my travel expenses and beyond.

If I were to carry so much debt I had difficulties sleeping at night, I would certainly get rid of ANY luxury, travel and eating out would go first.

What would you do?

This post was featured on The Frugal Farmer, thanks!

Planning for a secure financial future is a wise decision that you should make for your family. You need to be committed to building wealth and take charge of your money. By investing in the right ... END_OF_DOCUMENT_TOKEN_TO_BE_REPLACED

Cryptocurrency has become a popular investment option in recent years, as more people want to make profits from its white-hot rise. However, cryptocurrency investment is a risky endeavor. It is highly ... END_OF_DOCUMENT_TOKEN_TO_BE_REPLACED

Unsurprisingly, there are plenty of people out there jostling to help you spend your nest egg. All promise high returns, but not all that many deliver; in fact, you can quickly lose your super if ... END_OF_DOCUMENT_TOKEN_TO_BE_REPLACED

If you have recently taken up a position at a brand-new company and opened a 401k for the first time, you may be on the hunt for additional information when it comes to the various ways in which tax ... END_OF_DOCUMENT_TOKEN_TO_BE_REPLACED

Congratulations! You’ve worked hard this year. You made it through some tough days (or weeks or months). And now, if you’re lucky, you might end up with a holiday bonus. But before pocketing that ... END_OF_DOCUMENT_TOKEN_TO_BE_REPLACED

The United States of America is a destination most working professionals and travellers have on their list. Being one of the most visited countries in the world, it houses many tourist attractions, ... END_OF_DOCUMENT_TOKEN_TO_BE_REPLACED