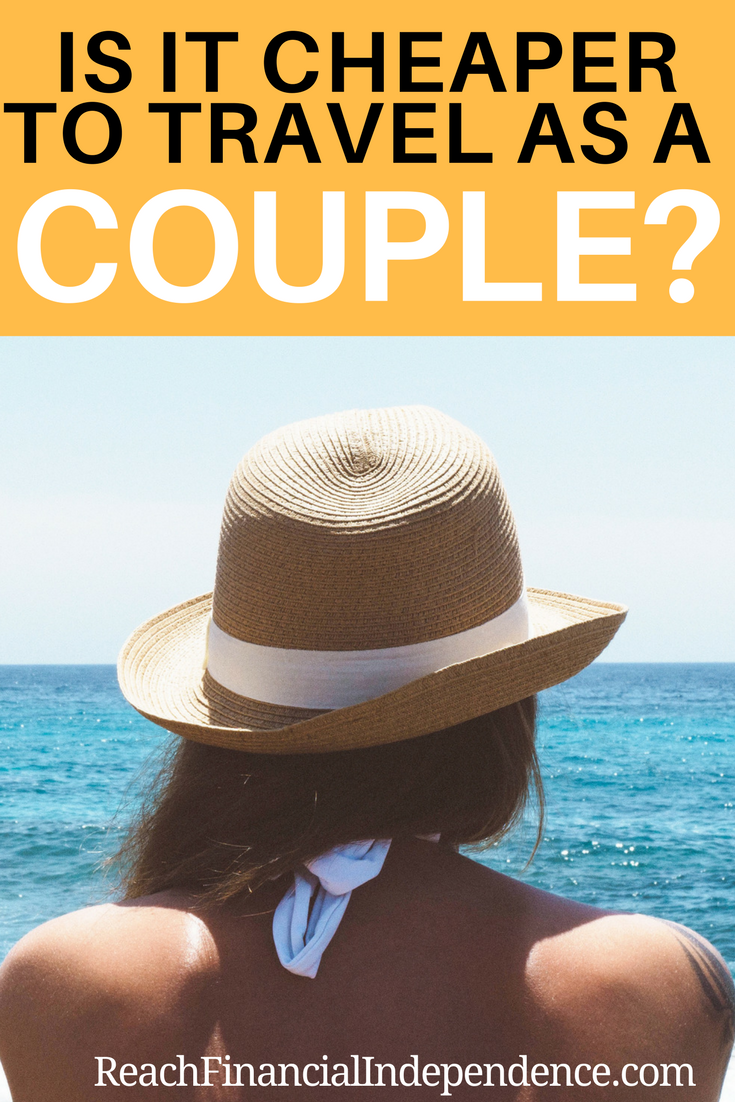 When I graduated from college 10 years ago, I took off to travel the world for a year on my own. I was young, the best of life was still to come, and I really wanted to do it… on a shoestring budget. So when I saw other people traveling around as a couple, I often wondered if it would be cheaper to have a travel companion. That is NOT the reason why I have a boyfriend now, but since we met, we have traveled extensively.

We took a motorcycle trip from Guatemala to the US for 9 months, traveled around Europe for 5 months and then 2 months, and have enjoyed a lot of smaller trips around Guatemala.

Now that I can compare the two, let’s look at expenses from solo travel and compare with traveling as a pair. 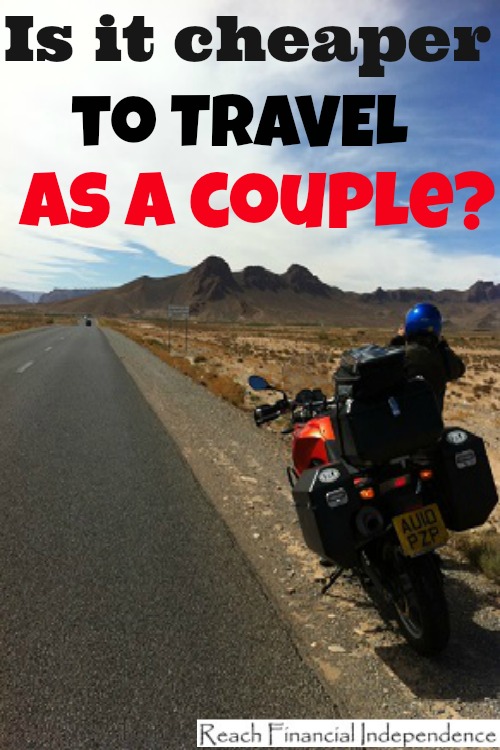 Save on accommodation. We normally rent rooms on Airbnb or find basic hotels. A single room is rarely half the price of a double room. More like 20% off, sometimes there are no discounts at all, like in France’s budget hotel chain F1, the room rate is the same for 1 to 3 people. Based on that, we saved about half price on accommodation on our last trip, compared to traveling alone.

When I traveled along, I camped some nights but rarely had the courage to pitch my tent in the middle of nowhere. I would ask families if they mind me camping on their land, and would camp once in a while. With BF by my side, we would camp anywhere.

One item, two users. If there are two of you, you only need one camera. We only used one motorcycle and rode two up. And so on. We could even go on one toothbrush. Many items can be shared, so you pack lighter (and pay less baggage fees) and save on the item itself too.

Save on food. If you go to a restaurant, you can share a main and each have a desert, or if you are on a picnic, chances are you won’t waste as much food as if you are on your own. Solo me would often throw food because there is only so much I can eat, especially if you are on the go and don’t have a fridge in your hostel.

Do it all together. If I want to see this and he wants to see that, we have two options, go our separate ways for the day, or see both things together. Meaning an extra expense for each of us, as on our own we would only had gone to one place.

Do more “touristy” stuff. Getting your portrait from a sketch artist in Paris, riding a gondola in Venice… it feels lonely to do it on your own, but as a couple, you want to get what people sell you as the whole “(insert place’s name) experience”.  While you would be happy reading in bed alone, as a pair, you want to go out, have a nice diner, buy a souvenir, and make it memorable.

Less stranger kindness. When you travel on your own, you are rarely alone. And people will give you rides, food, a bed… they will point you to the best value hotel, recommend their favorite restaurant. When you travel as a pair you are a bit closed to the world. Getting a person to host you on Couchsurfing is really difficult, people won’t come and randomly talk to you if you are already you own social unit.

Spend more on food. While the above is true, and you can save on food, you will also want to make your meals a special moment of the day, a time to sit together and share your impressions. When we started talking for hours, it was tempting to order another beer or more food, and generally speaking, we would sit more often in a restaurant instead of just buying food on the street because when there are two of you, it is nicer than sitting alone in a restaurant.

BF is a princess. I often joke about it, BF is used to the good life. When we were in the US, we would camp for two nights, then spend one night in a motel. It was ok for him as the motel always had private bath and was pretty comfortable. In Europe, he couldn’t get used to the small rooms, and the shared bathrooms. So I often had to upgrade to a more luxurious room.

He can’t go more than a day without a steak meal, even a picnic of ham and sausages is not considered “eating meat” in his book. I could last for days on bread and cheese.

We rode my bike instead of traveling by public transportation like I did during my student years. When there was no bike in Europe, I bought one. It is now gathering dust in my mum’s parking, although I rented it out this summer and made a little profit.

Have you traveled with someone else? Was that cheaper on more expensive than on your own?

This post was featured on the Blog Carnival, thank you!

Planning for a secure financial future is a wise decision that you should make for your family. You need to be committed to building wealth and take charge of your money. By investing in the right ... END_OF_DOCUMENT_TOKEN_TO_BE_REPLACED

Cryptocurrency has become a popular investment option in recent years, as more people want to make profits from its white-hot rise. However, cryptocurrency investment is a risky endeavor. It is highly ... END_OF_DOCUMENT_TOKEN_TO_BE_REPLACED

Unsurprisingly, there are plenty of people out there jostling to help you spend your nest egg. All promise high returns, but not all that many deliver; in fact, you can quickly lose your super if ... END_OF_DOCUMENT_TOKEN_TO_BE_REPLACED

If you have recently taken up a position at a brand-new company and opened a 401k for the first time, you may be on the hunt for additional information when it comes to the various ways in which tax ... END_OF_DOCUMENT_TOKEN_TO_BE_REPLACED

Congratulations! You’ve worked hard this year. You made it through some tough days (or weeks or months). And now, if you’re lucky, you might end up with a holiday bonus. But before pocketing that ... END_OF_DOCUMENT_TOKEN_TO_BE_REPLACED

The United States of America is a destination most working professionals and travellers have on their list. Being one of the most visited countries in the world, it houses many tourist attractions, ... END_OF_DOCUMENT_TOKEN_TO_BE_REPLACED