Good morning everyone! Over at Make Money Your Way I listed a few simple tips and tricks to know during your home inspection. Click here to read more..

And over at Savvy Scot we will continue our lifetime of savings series, now let’s see what should be tackled in your 40s. Click here to read more..

Since I started Make Money Your Way last July, I took a pledge to give 10% of my blogging income to support children education in my village. As you may have read in my last update about the project, I gave two scholarships to the best two students of middle school so they can go to high school 150 miles away for the next three years.

On top of that, I also want to help younger girls attend primary and middle school. Many of them don’t have money for shoes and the teachers won’t have them go to school barefoot. Plus the basic supplies and uniform, you are looking at around $30-50 per kid.

A school kit for a teenager with shoes, uniform fabric, books and a backpack like the one below costs $45, which is a week’s salary here. 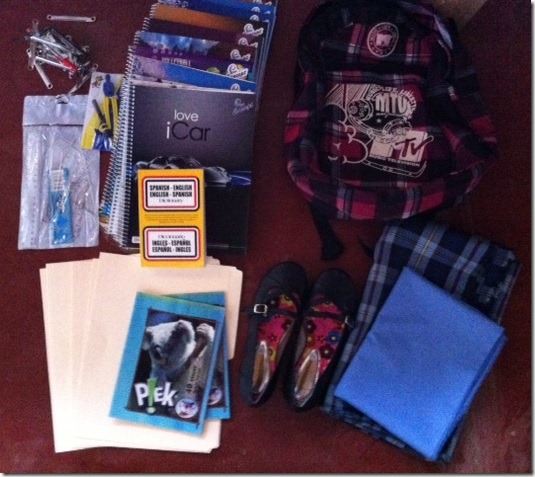 Here is the money I have

Thank you to each and every reader as well for helping me improve my stats and hence affiliate sales, Adsense revenue and blogging income in general. You rock!

My $5,555(!) fund has been used so far to spend $2,196 on back to school supplies, and tuition for the first months of boarding school, detailed here.

The kids are apparently having a blast at boarding school. They made friends, had their first few weeks of class, and may even go on a field trip around Easter. They came home once but apparently the school is in a remote location so they need to take a taxi to the bus station so they can come home, and the taxi is expensive.

They are allowed to get out once a month but are planning on staying anyway the next free weekend as they don’t want to spend so much only to travel for two days. I may go visit the school soon and would give them a ride back so they would only have to pay one way, but am not thinking about covering that expense for them on a regular basis. I want the family to contribute, or for them to choose not to come back, so that it “costs” them something to study, and they are truly involved in the project.

I paid for the next month of tuition for two $464 after making sure they would stick to it. Now I don’t think they will drop out, the most difficult part is over.

They also sent me a huge list of school supplies, with some kind of urgency, which annoyed me as the school had provided a list at the beginning of the year, but the teachers “forgot” most of the things the kids need to study properly. So now they were pressuring the kids to get the stuff, while they couldn’t get out of school until the next month! Thankfully my neighbor was able to drop the supplies last week. It cost me $133 to buy it all.

The kid studying accounting is going on a field trip to Guatemala city to visit the central bank and some other public institutions, that set me back another $150 and the other girl asked if she could go on a $45 day trip to the Caribbean coast. It seemed like a lot of money basically to lay on the beach, so I asked her if she would rather come home three times (the bus is $15 round trip) and see her family three weekends or spend a day at the beach. She called me a few days later and said family was more important so she would rather go home. So I am sponsoring her bus trips for the next three months. I had a hard time saying no because they are kids and I don’t remember my parents ever saying no to a field trip but I couldn’t see any value in that one and I am glad she chose the bus fare instead.

If those kids want to land even a minimum wage job in 10 years time, they’ll have to be at ease with a computer. The supermarket cashier uses one, the McD employee uses one…

In February, I went to Miami and  managed to collect a couple of laptops donated by readers. I also donated my own old laptop as I bought a new one there, and I bought a fourth one from Walmart to bring back for this project. One of the donated laptops is a Mac, but we should be just fine learning on all of them, however, I was about to buy a cheap Chromebook for the project, and realized it would be complicated for the kids to understand cloud storage and apps, while the others would be working on a normal laptop, so I paid a bit more to get a “real” laptop. I also got a keyboard and a few mice donated. Total spent on laptops, shipping fees and parking to collect the donated ones $918.

After spending an extra $160 to make a few primary school kits like this one: 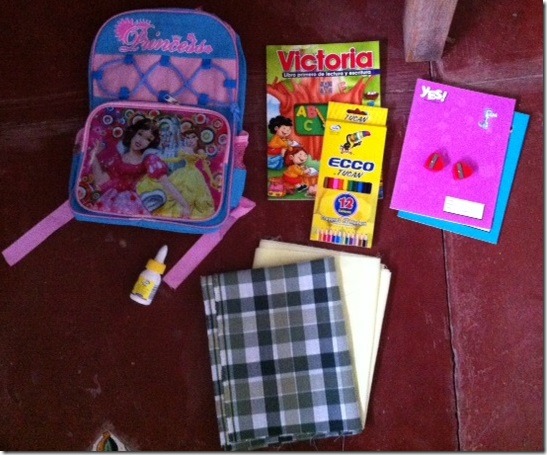 I had a few notepads, pens and pencils left over so I just went to the school and gave them to the headmistress. I’d prefer to give them in person but the school has begun now and hopefully the teachers will know who has the greatest needs.

I tried to give the supplies during the first week on school, but the teachers had gone on strike and announced the strike would last for two months. A month later, they are apparently back to work, and the kids are already behind…

Anyway, that is it for now. I will stick with the $500-ish monthly tuition payments and any extra money will be added to the fund until the next school year, or maybe to buy more laptops if the computer project goes well.

Again, thanks a lot for your help and encouragements!

This post was featured on the Young Adult Money, thank you!

Planning for a secure financial future is a wise decision that you should make for your family. You need to be committed to building wealth and take charge of your money. By investing in the right ... END_OF_DOCUMENT_TOKEN_TO_BE_REPLACED

Cryptocurrency has become a popular investment option in recent years, as more people want to make profits from its white-hot rise. However, cryptocurrency investment is a risky endeavor. It is highly ... END_OF_DOCUMENT_TOKEN_TO_BE_REPLACED

Unsurprisingly, there are plenty of people out there jostling to help you spend your nest egg. All promise high returns, but not all that many deliver; in fact, you can quickly lose your super if ... END_OF_DOCUMENT_TOKEN_TO_BE_REPLACED

If you have recently taken up a position at a brand-new company and opened a 401k for the first time, you may be on the hunt for additional information when it comes to the various ways in which tax ... END_OF_DOCUMENT_TOKEN_TO_BE_REPLACED

Congratulations! You’ve worked hard this year. You made it through some tough days (or weeks or months). And now, if you’re lucky, you might end up with a holiday bonus. But before pocketing that ... END_OF_DOCUMENT_TOKEN_TO_BE_REPLACED

The United States of America is a destination most working professionals and travellers have on their list. Being one of the most visited countries in the world, it houses many tourist attractions, ... END_OF_DOCUMENT_TOKEN_TO_BE_REPLACED