A few months ago, I went to France and thought about buying a new laptop. My beloved Asus Eeepc was already three years old, and had traveled on motorcycle panniers, subject to vibration, heat, cold, rain and much more for over 60,000 miles. But it held there, like a good little soldier, and I couldn’t find a replacement that really convinced me so I kept it a while longer. But after the last trip to Europe, it started getting more noisy, and I was afraid it would just die all of a sudden, so as soon as we got back to Guatemala, I went shopping for a new laptop.

Guatemala City has a few good shops, but it is a century behind when it comes to online shopping. I was unable to check which store had what in stock and at what price, let alone order it online. BF took me to Office Depot, and there was an Acer computer that was not too big (main requirement was being small) and looked ok. Ok, but not great. I liked a slim Samsung one which had a solid state hard drive, but at $1,500, it seemed a bit expensive. The Acer was under $400. That was a big difference.

As usual, BF was quick in calling me cheap, but my main point was that my old laptop cost around $450 and lasted for 4 years. So I while I could afford a $1,500 laptop, at the pace technology evolves those days, I was really not convinced it would last for 12 years, if a $500 laptop could last 4 years. 12 years is an eternity and a half in laptop years. Even my mum didn’t keep her Macbook that long. And my new laptop would be subject to the same heavy duty wear the old one was, traveling, being dropped on the floor, plugged on unreliable Guatemalan sockets, so I don’t think it would make it to the 12 year mark.

We kept going and went to three more shops, in the middle of the pre-Christmas shopping craze, and I couldn’t take it anymore. I was annoyed there were so many people, annoyed the Christmas songs were playing so loud so early in November, annoyed none of the staff knew anything about computers and just read the fact sheet when you asked for information, annoyed we were wasting a perfectly fine day shopping when anywhere else in the world I could have gone online, entered my digits and waited on the couch for UPS to bring my laptop, annoyed to be wasting BF’s day too as he was driving me around and I am too independent to call those kinds of favors. So after three stores we were back at Office Depot to buy the $400 laptop. 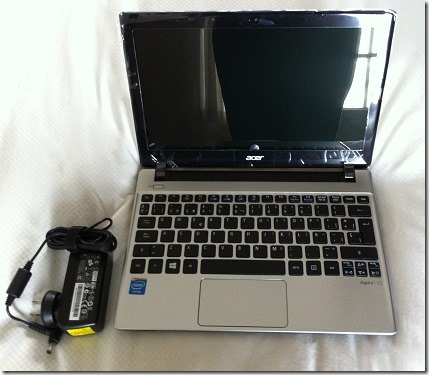 I was so little impressed about it that when we went back home I didn’t open it and kept using my old laptop for over a week. What the hell is Windows 8? What is that cloud that sends my personal information all over the web and steals my pictures? I know most new laptops would come with Windows 8 anyway, but it is really not my cup of tea.

One month later, I managed to sell my old laptop to the maid for $200, meaning the upgrade only cost me $200, and I was forced to completely switch to the new laptop. But I can only think about two months from now when I am going to the US and want to buy another smaller, faster, nicer laptop.

Long story short, we wasted time, I wasted money, energy migrating from one laptop to the other, just for something that is not fully convincing.

How many times have you done it? You needed a new shirt, went to the first store, grabbed the first shirt and called it a day? You went back home and never wore the shirt. Setting money on fire would have been more productive.

Or that time when you bought a subpar product, like a low quality knife for the kitchen, and after a week it didn’t cut properly so you never used it again? Or the item in sales just because it was 75% off, but it was not even your size, or something you would normally buy? When I was a bit heavier, I was often buying clothes one size under “for when I get back to my old weight”. Guess what, it won’t happen, and you look like a sausage if you wear something too small.

There is that thing called cost per use. It is 100 times more important than the cost of the item. If you buy a $10 item and use it once, that one use cost you $10. If you buy a $100 item and use it 1,000 times, it cost you $0.10 per use. I think I can offload my computer in the village once I come back from the US with a new laptop, so it is not entirely money down the drain. If I give the buyer the chance to pay a small sum monthly with no interest, I may get back the purchase price. But that is not the point, I bought something that didn’t make me want to jump in happiness. I should have stayed home and had a beer instead.

Next time you go shopping, think about it. Ask yourself how often would you use that thing you just put in the cart, and put it back if you are not entirely convinced.

What was your last “meh” purchase?

Planning for a secure financial future is a wise decision that you should make for your family. You need to be committed to building wealth and take charge of your money. By investing in the right ... END_OF_DOCUMENT_TOKEN_TO_BE_REPLACED

Cryptocurrency has become a popular investment option in recent years, as more people want to make profits from its white-hot rise. However, cryptocurrency investment is a risky endeavor. It is highly ... END_OF_DOCUMENT_TOKEN_TO_BE_REPLACED

Unsurprisingly, there are plenty of people out there jostling to help you spend your nest egg. All promise high returns, but not all that many deliver; in fact, you can quickly lose your super if ... END_OF_DOCUMENT_TOKEN_TO_BE_REPLACED

If you have recently taken up a position at a brand-new company and opened a 401k for the first time, you may be on the hunt for additional information when it comes to the various ways in which tax ... END_OF_DOCUMENT_TOKEN_TO_BE_REPLACED

Congratulations! You’ve worked hard this year. You made it through some tough days (or weeks or months). And now, if you’re lucky, you might end up with a holiday bonus. But before pocketing that ... END_OF_DOCUMENT_TOKEN_TO_BE_REPLACED

The United States of America is a destination most working professionals and travellers have on their list. Being one of the most visited countries in the world, it houses many tourist attractions, ... END_OF_DOCUMENT_TOKEN_TO_BE_REPLACED