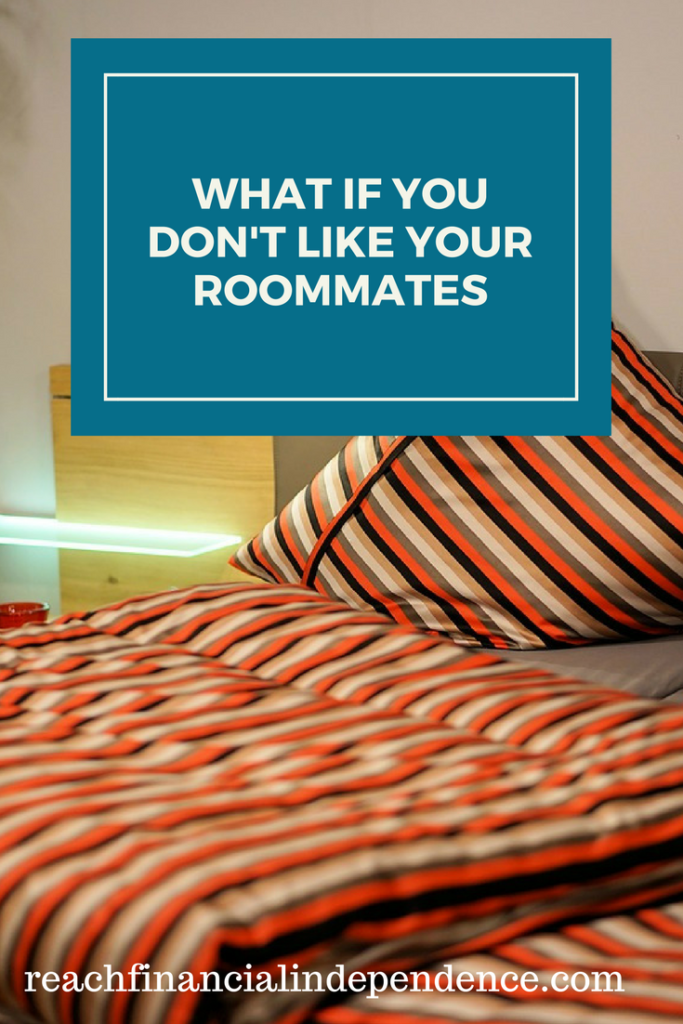 Living with roommates can be a lifestyle choice, or a temporary obligation to save on rent while you move to a place of your own. In many case, I was contemplating yesterday the price of having a roommate and concluding that it was a small sacrifice compared to the huge savings in rent, utilities and other house bills.

This happens when the roommates don’t chose their other roommates, or can happen too if you were too quick to find a roommate and took the first one in without asking about tastes and lifestyle. You can end up with rude, dirty, noisy people, or all of the above.

So what to do?

In those big houses, where the landlord chose random roommates, I would stick to myself, and make sure my room was as cozy and comfy as possible, since I would spend more time there than in the common areas.

In one of the houses, I actually kept my food and kitchenware in my room! Or I would not find my food the next day, and my pan would always be dirty when I needed it. You can install some kinds of lockers if your kitchen is big enough.

To me, it was a temporary solution. I had just moved to a new city and taken the first room. I was stuck with a six months rental contract, so I paced myself and waited. I also tried to communicate with the others to see why no one was taking care of the house and respecting the place where they lived. They didn’t seem to care much, can you believe that in 6 months I never did a cleaning turn? And no one else did either.

So I made sure my little world inside my room was safe and nice. I bought a desk, where I would also eat at night. I planted some flowers by my window, I cleaned regularly. If I couldn’t change the outside of the room I had to make the inside as pleasant as possible.

Of course most roommates won’t react like this when presented with the option to better their living conditions. If they don’t want to clean, you can offer to take their cleaning turn, and in exchange they can take the garbage out for a week, or you could all chip in and pay for a cleaner to come regularly.

After almost 10 years and many different living arrangements, I have found out that it comes down to two things

Decide what is important for you

Because you live with roommates doesn’t mean you have to live like a poor student. I have actually seen beautiful house-shares, with lots of room for everyone, sometimes a guestroom, art studio, garden… The tenants could cramp more people in there but chose not to, in order to live well. They could each get a small studio of their own for a slightly cheaper rent, and again, chose to live together to enjoy a big living room and a big house.

House-shares can actually be a really good thing.

Planning for a secure financial future is a wise decision that you should make for your family. You need to be committed to building wealth and take charge of your money. By investing in the right ... END_OF_DOCUMENT_TOKEN_TO_BE_REPLACED

Cryptocurrency has become a popular investment option in recent years, as more people want to make profits from its white-hot rise. However, cryptocurrency investment is a risky endeavor. It is highly ... END_OF_DOCUMENT_TOKEN_TO_BE_REPLACED

Unsurprisingly, there are plenty of people out there jostling to help you spend your nest egg. All promise high returns, but not all that many deliver; in fact, you can quickly lose your super if ... END_OF_DOCUMENT_TOKEN_TO_BE_REPLACED

If you have recently taken up a position at a brand-new company and opened a 401k for the first time, you may be on the hunt for additional information when it comes to the various ways in which tax ... END_OF_DOCUMENT_TOKEN_TO_BE_REPLACED

Congratulations! You’ve worked hard this year. You made it through some tough days (or weeks or months). And now, if you’re lucky, you might end up with a holiday bonus. But before pocketing that ... END_OF_DOCUMENT_TOKEN_TO_BE_REPLACED

The United States of America is a destination most working professionals and travellers have on their list. Being one of the most visited countries in the world, it houses many tourist attractions, ... END_OF_DOCUMENT_TOKEN_TO_BE_REPLACED