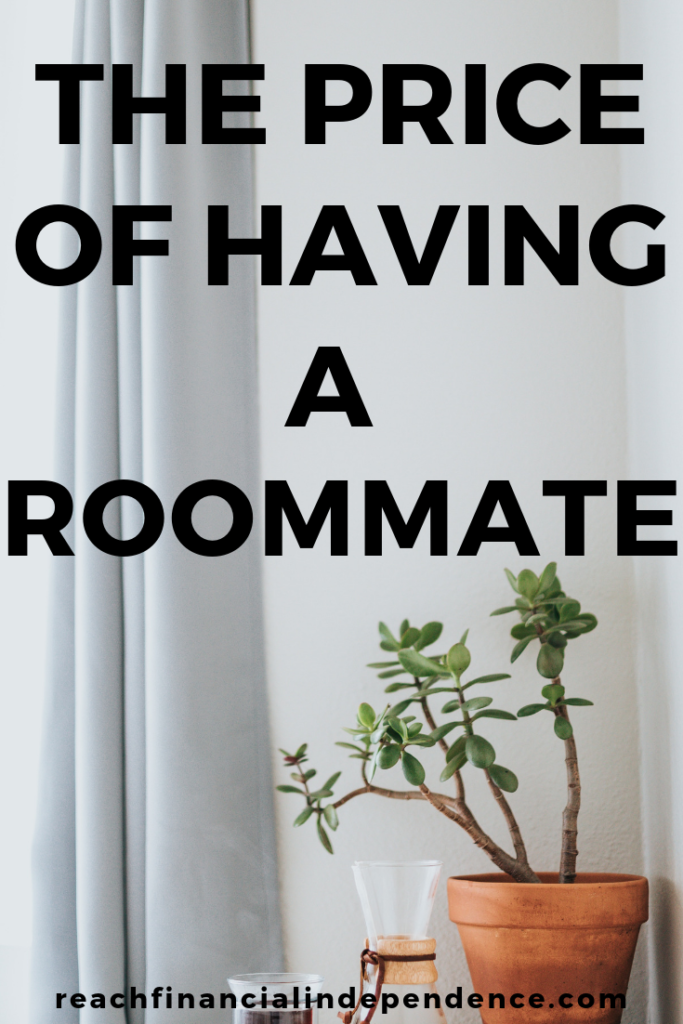 I have almost always lived with roommates and some of them were a pleasure to be around, while others were a real pain. With some we would make dinner together, or go out, and with other we wouldn’t talk for months. Obviously the first is nice while the later isn’t that great.

When I moved to the UK in 2007, I ended up in a house shared with five other people. The landlord would rent randomly to anyone willing to pay, meaning that the housemates didn’t know each other, barely talked and didn’t get along well. I was tied to a 6 months contract and couldn’t wait until I was able to move out again.

Yet I couldn’t afford to live on my own without making a serious dent in my budget, postponing the date when I would be financially independent. So when it was time to move, I looked for a 2 bedroom flat and shared it with my boyfriend and another couple. It ended up being roughly the same financially as sharing that big house between six people. Much nicer situation.

I could have chosen to live alone, or just with my boyfriend. But if I remember correctly, a one bed flat was about $700, while the 2 bed flat was $900. So each couple paid $450 and we had a bigger living room, a nice kitchen, and shared utilities, taxes and other house related bills. In total, we paid about $600 monthly while on our own we would have paid $1000.

So is it worth $400 a month to have a roommate? In our case, definitely. We were young, my boyfriend didn’t have a steady job, I have just started an entry level job and wanted to save for a house deposit. So I could bear to live with two other people for a few month.

Say you want to live on your own, because you don’t like community living, or want your space, or need somewhere to work from home, be an artist… You are missing out on $400 a month, or $4800 a year. Tax free. You may consider it worth paying for the freedom of doing whatever you please when you please in your home. But to me, the sacrifice was pretty small in order to reach my savings goal faster.

Congratulations! You’ve worked hard this year. You made it through some tough days (or weeks or months). And now, if you’re lucky, you might end up with a holiday bonus. But before pocketing that ... END_OF_DOCUMENT_TOKEN_TO_BE_REPLACED

The United States of America is a destination most working professionals and travellers have on their list. Being one of the most visited countries in the world, it houses many tourist attractions, ... END_OF_DOCUMENT_TOKEN_TO_BE_REPLACED

When you were a kid, did you ever save quarters in a jar? Or set aside a portion of your allowance in a piggy bank for a big purchase, like a bicycle, a pair of designer shoes, or anything that mom ... END_OF_DOCUMENT_TOKEN_TO_BE_REPLACED

No matter where you are in your career, the potential of eventually retiring can be a daunting experience to think about. Are you saving enough for the future? If you are, when will you have enough ... END_OF_DOCUMENT_TOKEN_TO_BE_REPLACED

“Open an account with us – and get a free toaster!” These days, the bank toaster (clock radio, electric blanket, or other gadget) has become a cliché for consumer banking. But what you might ... END_OF_DOCUMENT_TOKEN_TO_BE_REPLACED

Watermelon. Corn-on-the cob. Fireworks after sundown. Amid all the fun, it’s easy to forget that the Fourth of July is more than just another summertime barbecue: It’s a reminder that independence is ... END_OF_DOCUMENT_TOKEN_TO_BE_REPLACED