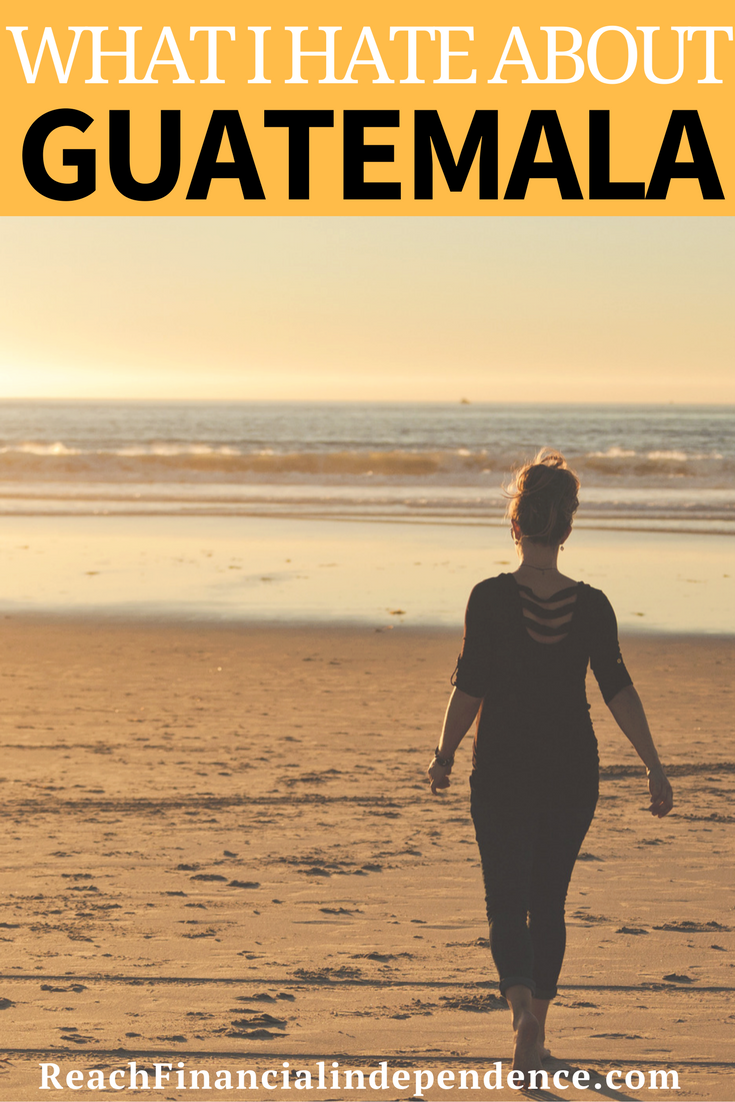 Yes, that’s right, I am starting the week with a rant. If you would like some lighter reading, head over to Canadian Budget Binder, I talk about grocery shopping in Guatemala, and how divine the food is! 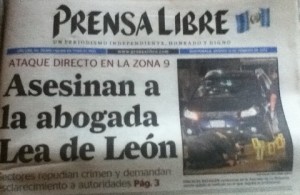 As I was on my way to Guatemala City last week, BF called me and told me ”Lea is dead, she was shot”. Lea was a classmate of his who had become a prominent lawyer and usually dealt with some pretty important cases. They were in charge of each other’s legal affairs. She always took pride in fighting fair, never paying corrupted officials to win her ways. When she left her office last Thursday, a motorcycle shoot her over 15 times, killing her on the spot and her driver shortly after.

Her husband said she had been receiving threats and condemns a high official for the murder. Unfortunately, Lea is not the only one. While I was waiting for the bus, I overheard the comments about her death (she made front page in the national paper). People said ”one more”, ”now it just seems normal”, they consider reading about murder in the news normal!

And Lea’s husband is probably right about the murderers being sent from someone close to the government or some corrupt official.

I hate that about Guatemala. You can hire a killer for under $500. You can literally put a price on life. And it is not much.

I also hate that some people are so desperate they would do anything for money. I hate watching behind my back every five steps I take when I am in the worst parts of Guatemala City. I hate that I have been mugged twice and this has affected my love for this country. I hate that I have to remove my necklace, earrings and hide my money in five different places when I go to the capital city.

I hate that together with El Salvador and Honduras, Guatemala has one of the highest murder rates in the whole world.

I hate that drug traffic is artificially maintaining the currency level and making life expensive for everyone. The Mexican peso or Brazilian Real are constantly devaluing against the dollar while the Guatemalan Quetzal has held the same value for 10 years. Drug lords create jobs to launder the drug money and are protected by the police and ”public servants” as well as the people, who see no other option than work for them.

I hate that instead of chasing them for money laundering, they are onto me for bringing my savings to buy a property. I had to wait for two hours at the bank just to transfer money from my Guatemalan account into BF’s account with the same bank.

I hate seeing the families crying at the bus station as their eldest son ships clandestinely to the US in hope of a better future he will probably never get. He will either die at the border, be sent back without his family’s life savings or start a life of slavery, bunking with other 12 illegal migrants in a one bed apartment in order to send half of his salary home. They know that and they still want to go, they see no other choice here.

I hate that people are not educated enough to realize that if they put the same effort into starting a small business here, they would be better off than as illegal migrants. And that they are kept that way because most of the education and development budget is used to pay for corruption at every level. A friend involved in government projects estimated about 50% of the budget is lost in baksheesh and ”gift giving” to public servants.

I hate the hypocrisy of the rich, living in gated condominiums and pretending nothing is happening.

I hate that some don’t even dare see the light of day, going straight from their basement parking into their office parking, and claim they care deeply for their country, when they have never been to my region and only holiday in Miami.

And I hate that the rest of the country, so amazingly beautiful and peaceful, suffers from the bad reputation from Guatemala City. It affects tourism, the economy, the right everyone should have to grow up safely and have access to food, housing, healthcare and education.

As I write this from the bus station, I can’t wait to go back home to my little peaceful house. This city is getting worse all the time. The president just celebrated a year of mandate and has been visually polluting the streets with banners about all his ”accomplishments”. Put lightly, he has done nothing. His banners acclaim the reduction of child hunger, the raise of education, yet not one gives a number. Has he fed 100 child with a $1,000,000 budget? Something like that, probably. 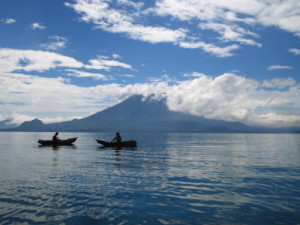 Guatemala is a country so rich I lack words to express how everything grows so easily, how perfect the soil is, how many minerals there are… and yet everything is taken away by greedy characters. One example is a gold mine that foreigners want to exploit. Guatemala would provide the land, they would provide the machinery. What would be a fair trade? 50/50? They are considering giving 10% to Guatemala. I don’t know if this is a late attempt at colonizing or they mean well but are just being asked to pay so much to corruption they can’t afford to share more.

Once in a while a non profit shows up and digs a dwell or builds a school. After all the money that has been taken, other countries clean their conscience. And leave. The state stops paying teachers, the school closes. The gas runs out to operate the dwell, or the source dries. People are so used to others robbing them, when something comes their way they try to get their share and you can’t blame them, but this is not how a country can move forward.

Sorry, it is not all rainbows and unicorns here, and once in a while, it is time for a rant. A 1,000 words rant, when every week I write a 1,000+ words post on how fantastic life is around here and how beautiful the country is. I am still in love with it, and hope my hate list will shrink over time.

Planning for a secure financial future is a wise decision that you should make for your family. You need to be committed to building wealth and take charge of your money. By investing in the right ... END_OF_DOCUMENT_TOKEN_TO_BE_REPLACED

Cryptocurrency has become a popular investment option in recent years, as more people want to make profits from its white-hot rise. However, cryptocurrency investment is a risky endeavor. It is highly ... END_OF_DOCUMENT_TOKEN_TO_BE_REPLACED

Unsurprisingly, there are plenty of people out there jostling to help you spend your nest egg. All promise high returns, but not all that many deliver; in fact, you can quickly lose your super if ... END_OF_DOCUMENT_TOKEN_TO_BE_REPLACED

If you have recently taken up a position at a brand-new company and opened a 401k for the first time, you may be on the hunt for additional information when it comes to the various ways in which tax ... END_OF_DOCUMENT_TOKEN_TO_BE_REPLACED

Congratulations! You’ve worked hard this year. You made it through some tough days (or weeks or months). And now, if you’re lucky, you might end up with a holiday bonus. But before pocketing that ... END_OF_DOCUMENT_TOKEN_TO_BE_REPLACED

The United States of America is a destination most working professionals and travellers have on their list. Being one of the most visited countries in the world, it houses many tourist attractions, ... END_OF_DOCUMENT_TOKEN_TO_BE_REPLACED