I have been really annoyed with the land workers lately. Well, with the contractor, the other ones just obey him. He is a macho and only listens to BF, and at the same time wants to be treated like one of us, which leads to awkward situations. Anyway, BF was gone for a few weeks and I was supervising the guy, he did ok the first week but the second he put the 6 workers plus himself with machetes to clear the land. I asked him to do a cleaning team and another team to fix the road as it had rained a lot and we needed a way to evacuate the water without damaging the road. He said people were more motivated cleaning together then building together. Oh ok, should I bring you a beer as well to motivate you? The next day, I formulated my request again, and was ignored again. So the third day, I went to see him to give him his check and lay all seven off until further notice. While 5 were basic workers and could be doing any work, he had a skilled builder and himself doing basic cleaning work while I was paying them double the others? Yeah, sure.

My doubts that he was delaying the works while BF was away to make sure he and his 6 friends stayed employed longer than needed got confirmed when he came for his check. Every Saturday, without fault, for the past 8 months, we have given him a check for the week’s salaries. Every Saturday, on his work hours, he has gone to the bank to cash the check, gone back with cash and given it to the workers.  He needs his ID to cash the check. Here is what he did (while I was paying him hourly): gone to work in the morning with no ID. Gone to me for the check. Gone back home, past work, for his ID, gone back to the bank, past work and past my house.

Losing about an hour in the process. If life can be complicated, why make it simple?

While he was with me he was repeating “next week, we’ll do this”, “next week we’ll do that”. I savored my “there will be no work next week” and his face changing as I said so. Yes, I am mean, the poor guys won’t have work and they have to eat, but maybe they will understand that you need to do the work you are required to do and not what you feel like doing.

I also mentioned that as long as the council was not budging on our permits, there would be no more work, so they should go bug the mayor if they want their jobs back. And the soccer field we will give the village.

Another bureaucratic process we had to go through this week was the land registry visit for our waterfront plot. You know how each plot should have a cadaster number and clear limits, so when you buy plot 123 from Mr. Smith it is just a question of title transfer? Well here, every time you buy, someone comes to visit and take GPS data of the land you claim is yours. First, because of corruption. The councils have been known for selling one same plot to 2-3 people. Then, because people are sneaky. We have no neighbors around, so we could have pushed the limits of our land 10 meters with no one knowing. It took the guy 8 months to come and should take another 8 months for him to validate that our land is our land. Awesome. We had to pay the architect to draw a map of the land, even though there was one attached in our sale’s notarized papers, and we now have a huge banner in front of the house saying “hey, we are claiming the place we have been living in full time for the past 8 months without anyone having any conflict with it!”. I understand the need for those banners on an empty land, but our main residence? Gotta love the bureaucrats.

Enough with the rants! I had company this week, a friend came to stay for a few days and he wanted to visit a few Mayan ruins I didn’t know, next to the Belizean border. We went with his bike, and since it is Guatemala, were allowed by the National Park rangers to take the bike to the jungle in search of the ruins. It was a lot of fun. My friend is one of the best drivers I know, and I don’t say it lightly, BF has driven me for 50,000 miles around the US and Europe, and his predecessor crossed Africa from Cape Town to Cairo on a bike. But this guy makes it look like the bike is an extension of himself. 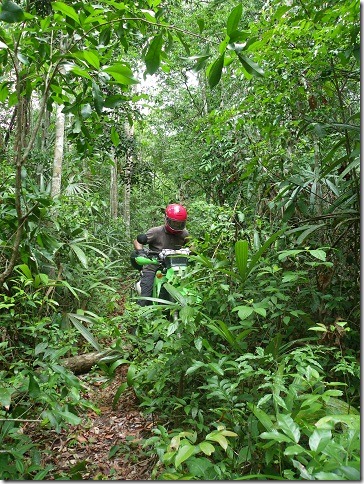 So off we went, the rangers had said that the road was “50% bad”, which meant really terrible, and they hadn’t driven there themselves for months, but we decided to give it a try anyway. It had rained a lot, and the 650cc was quite big to handle, not like those light trail bikes. As we kept going, we came to a stop as a tree had fallen and was blocking the road. “Step down” said awesome-driver. I obeyed, the guy accelerated and jumped over the trunk! It was amazing. That is another tree he jumped.

And one he got stuck on :). The vegetation was too luxurious to gain speed. 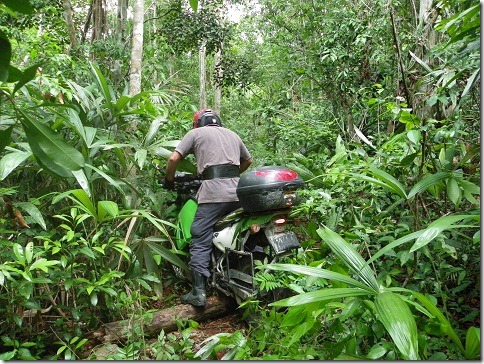 As we went deeper, the road turned into a path, it was steep and slippery.  Awesome-driver accelerated to go over a small hill, lost control, and we fell. At 5 mph it was ok, but then he turned to me and said “all the falls will be like that”. The WHAAAAT? Falls like plural falls?  I kept my thoughts and we fell “only” twice in total. 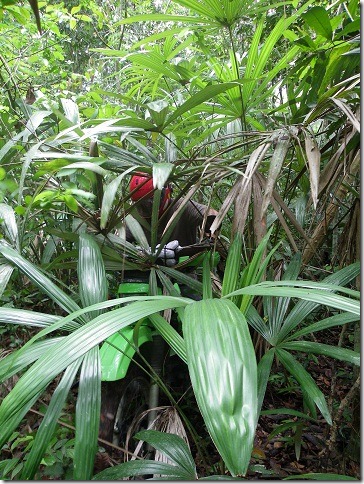 The red dot is his helmet, the bike is buried in jungle. 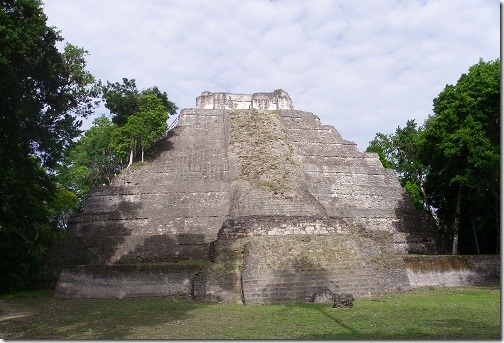 Never found the ruins we were looking for as the rangers had been very vague with the directions but we ended the day at Yaxhá, that is where Survivors Guatemala was set, and one of the most impressive ruins of the region. 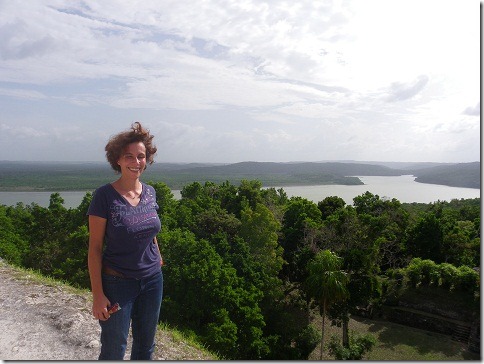 The Mayas sure knew how to enjoy a view! I also love that it is so rough, there are no safety nets, you can climb everywhere, touch everything… if it were Europe you would only see it from afar, let alone be the only one on site! Tons of fun for $5 (Guatemalan price, I think foreigners pay $20, but I kept my helmet at the entrance lol). 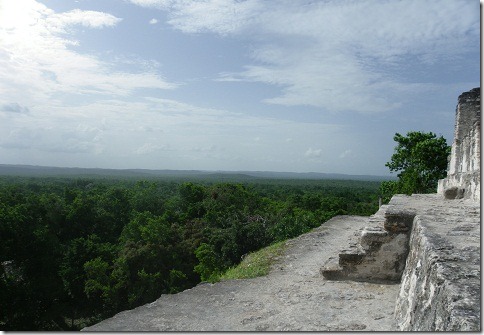 The Mayan biosphere canopy, miles and miles of pristine forest.

Then we had fish on the lake and one of the nicest swims of the month, after a day in the heat and humidity of the jungle, being eaten alive by mosquitoes, getting in the water was heaven.

This post was featured on the Satisfying Lifestyle Carnival, thank you!

Planning for a secure financial future is a wise decision that you should make for your family. You need to be committed to building wealth and take charge of your money. By investing in the right ... END_OF_DOCUMENT_TOKEN_TO_BE_REPLACED

Cryptocurrency has become a popular investment option in recent years, as more people want to make profits from its white-hot rise. However, cryptocurrency investment is a risky endeavor. It is highly ... END_OF_DOCUMENT_TOKEN_TO_BE_REPLACED

Unsurprisingly, there are plenty of people out there jostling to help you spend your nest egg. All promise high returns, but not all that many deliver; in fact, you can quickly lose your super if ... END_OF_DOCUMENT_TOKEN_TO_BE_REPLACED

If you have recently taken up a position at a brand-new company and opened a 401k for the first time, you may be on the hunt for additional information when it comes to the various ways in which tax ... END_OF_DOCUMENT_TOKEN_TO_BE_REPLACED

Congratulations! You’ve worked hard this year. You made it through some tough days (or weeks or months). And now, if you’re lucky, you might end up with a holiday bonus. But before pocketing that ... END_OF_DOCUMENT_TOKEN_TO_BE_REPLACED

The United States of America is a destination most working professionals and travellers have on their list. Being one of the most visited countries in the world, it houses many tourist attractions, ... END_OF_DOCUMENT_TOKEN_TO_BE_REPLACED