It has been over three months now, and two full months since the works started on the new room. 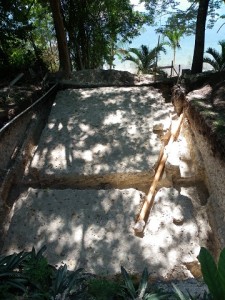 Footprint of the new room, December 2012

Now the new room is almost finished! It looks a bit strange, like a cave, but is kind of cool, and there should be very little heat entering through the only window. 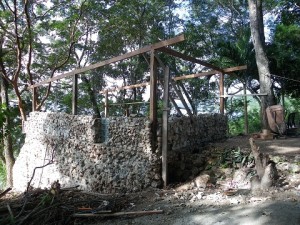 Seen from the neighbor’s land, the wall of the room is also the perimeter wall.

That only window will be 3×2 meters with sliding doors, and slightly polarized, protecting from the sun and so people can’t see us when we are inside. 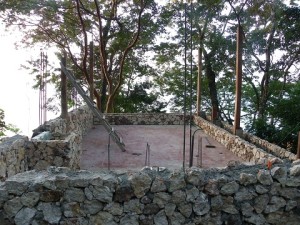 Top terrace with flower beds all around

On top of the room, what was just going to be an extended panoramic garden is becoming a full terrace, complete with barbecue (the fire will also heat a sauna in the bathroom underneath), equipped kitchen and lounge area. 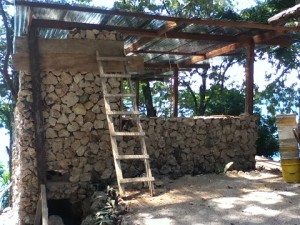 The kitchen will have an open working space that will allow to pass dishes to the table, as well as a fridge and a sink. We are thinking about moving permanently the main kitchen there, although it will have no doors and people/animals could get in at night. 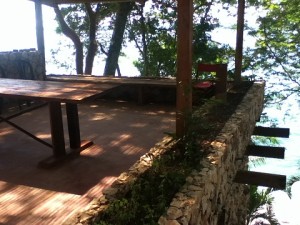 All this terrace area will cost a bit more but  we should remain under $10K for the whole thing. You can check the last post on costs, and I will update when it is all over. 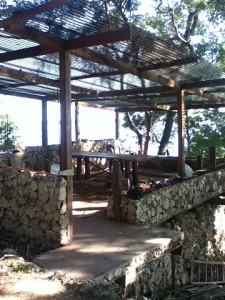 We recycled so much wooden pillars from the 90 acres land it is impressive. A guy we hired polished it and we used the pillars to strengthen the roof of the room, build a covered area over the terrace, and make this awesome table. 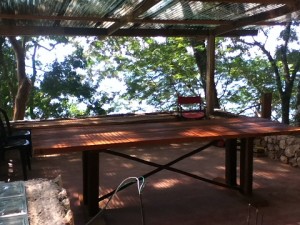 It is so heavy two people can’t move it, and it will come with matching benches to sit. Total cost, about $30 for the guy’s salary, I think this kind of sturdy table would sell for at least $400 even here. 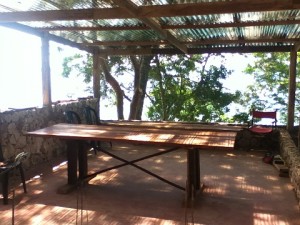 It can seat 10 comfortably and 12 fine, with matching benches. The carpenter is now building a low L-shaped seating area with a coffee table which should have the best view of all. We trimmed a few trees and kept some low hanging branches for shadow, no tree was cut, the house fit perfectly on the land. 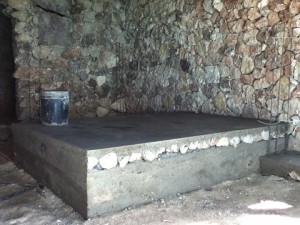 no dust under the bed!

Inside the room, the bed is built, it is made of stone and concrete, we just have to go buy a mattress. It is not the most beautiful bed (will be painted and polished) but at least we don’t have to buy a bed structure and to clean under it. 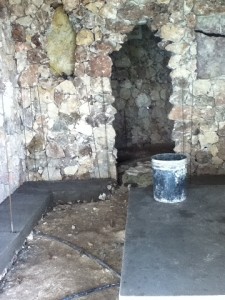 All around the room there will be storage, and shelving with the same concrete layer underneath to avoid dust and nasty animals hiding. 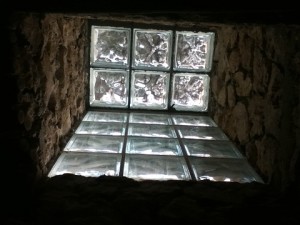 skylight in the bathroom

The bathroom is almost finished too, the shower floor was made with little rocks from the beach and concrete, the rocks are polished and kind of flat yet the floor isn’t slippery. There is also a skylight on the shower to bring natural light and the door has been ordered.

The next job is to build a small room adjacent to the house for a guardian or a maid, and a wall to separate a service area where we dry clothes and store woods from the rest of the garden.

On the 90 acres development, things are progressing slowly. The architect is a young graduate who seems a bit overwhelmed with the project, and I think quoted us too cheap since he is delegating most of the work, but now can’t go back as we sealed the deal. 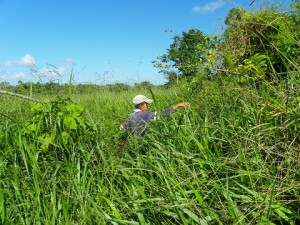 This kid is 12 and almost buried in pasture

After seeing the land, he started by saying he needed one week on site with GPS to issue a map with levels of the ground. And then turned out with a team of topographers who planed on doing it all in a day but refused to walk around because the grass was too high. We found a farmer who put cattle there for a while to eat the pasture, but it was still too high for their taste so we burned the rest to the ground. Not very eco-friendly and the fire was really impressive but the trees were spared and the grass should actually grow back stronger. 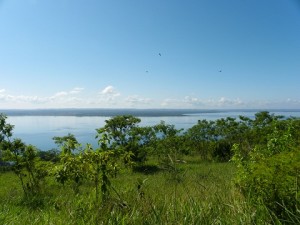 view from the land

Fingers crossed, they are coming back this week to finish their work. With that map we should be able to draw parcels and streets, and actively start selling the plots. Our new room can serve as a show room for people who would like to build similar stone houses, and we would help them find a good team of workers to do the job. Building is never easy, especially in a new town where you don’t know people so it should make life easier for perspective buyers.

I am amazed that the new room turned out under $10K, even though it is a huge amount of money, there will be about 600sqft downstairs and the same area of terrace, so the cost per sqft is really low. That is thanks to everything the land has provided, wood, stones, some pipes the previous owner left, … and cheap labor of course.

The land development is going to be crazy expensive though, and we are thinking about selling small plots at the back at a very low price, targeting workers from the area, so we make enough to cover the works as we go. Another idea is to offer the working team partial payment with land, as their work will increase the value of the land, they should have positive equity real quick. 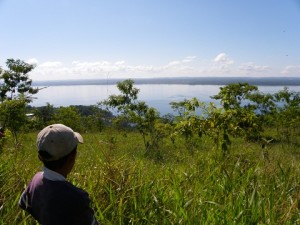 panoramic view from the land

On the animal front, sad news. Mrs goose is dead. She was probably hurt by someone throwing a stone at her, or our fighting rooster. BF found her floating on the lake, lifeless, with Mr goose shouting to the top of his lungs, heartbroken. 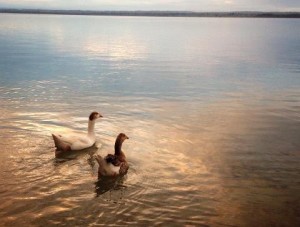 We disposed of the body and bought another lady goose for him the next day, and he moved on. Animals are incredible like that. Although apparently geese are monogamists and he had been paired with Mrs goose for 4 or 5 years in BF’s ranch so he may not mate with the new one straight away. On the day of her arrival, Mrs goose laid an egg! This is really cool because they don’t lay much, unlike hens, and you should see the size of that thing! Now we need her to seat on it and that is another story…

The five chicks are now seven, everybody looks strong and healthy. They sleep in our bathroom since their mum is jealous of another hatching hen and always bothers her to get out of the nest.

Planning for a secure financial future is a wise decision that you should make for your family. You need to be committed to building wealth and take charge of your money. By investing in the right ... END_OF_DOCUMENT_TOKEN_TO_BE_REPLACED

Cryptocurrency has become a popular investment option in recent years, as more people want to make profits from its white-hot rise. However, cryptocurrency investment is a risky endeavor. It is highly ... END_OF_DOCUMENT_TOKEN_TO_BE_REPLACED

Unsurprisingly, there are plenty of people out there jostling to help you spend your nest egg. All promise high returns, but not all that many deliver; in fact, you can quickly lose your super if ... END_OF_DOCUMENT_TOKEN_TO_BE_REPLACED

If you have recently taken up a position at a brand-new company and opened a 401k for the first time, you may be on the hunt for additional information when it comes to the various ways in which tax ... END_OF_DOCUMENT_TOKEN_TO_BE_REPLACED

Congratulations! You’ve worked hard this year. You made it through some tough days (or weeks or months). And now, if you’re lucky, you might end up with a holiday bonus. But before pocketing that ... END_OF_DOCUMENT_TOKEN_TO_BE_REPLACED

The United States of America is a destination most working professionals and travellers have on their list. Being one of the most visited countries in the world, it houses many tourist attractions, ... END_OF_DOCUMENT_TOKEN_TO_BE_REPLACED