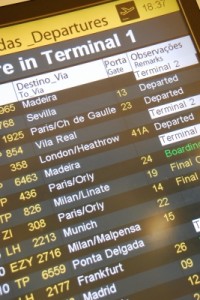 Traveling by itself can be kind of expensive but little do people know they’ll end up spending a good portion of their traveling money just by standing around the airport while they wait for their flights.  Luckily, there are a few tips to keep in mind to help you from dropping and arm and a leg just in the airport alone.

If you travel a lot or are planning on making frequent travels by plane, it’s high time to look into a credit card that offers a lot of rewards for people like you.  If at all possible, see if you can find no interest credit card offers as well as those that offer airline miles as rewards for purchasing items with your cards.  The chances are quite high that you’ll end up using your credit card to fund at least a small portion of your trip so having no interest will be a huge advantage.  Likewise, airline miles will come in handy once you’ve racked up enough to go on one of your trips.

Most people spend money at the airport simply because they’re bored.  When you’re thinking of hitting up the airlines to travel, you should plan on parking your car in the LAX long term parking early in the morning and heading right for the earliest departure available.  You’ll save a ton of money because earlier flights usually don’t get delayed as often and the better news is that parking at LAX is often subject to discounts and promotions.

As of right now, the TSA mandates that water and liquid substances aren’t allowed, which means you could end up spending about five dollars on just a bottle of water.  Bringing your own empty bottle will alleviate this because you’re still allowed to fill it up at the drinking fountain.  Keep this same strategy in mind when it comes to food because food at airports is usually quite overpriced.  Bring snacks with you and your family before you head to the airport to keep these costs down.

There are quite a few credit cards nowadays that also offer special bonuses and rewards for those who travel frequently.  Sometimes there are costs involved with this but if you’re going to be at the airport for a good portion of the year, it might be worth it.  These offers usually include access into the lounging areas of airports, which usually serve complimentary food and drinks, which means you won’t need to buy them elsewhere.

Don’t pay for the WIFI.  Unless you’re on business and you need to access the Internet immediately, stick to using the 3G on your phone or just simply use the time to relax and get away from the responsibilities of email and stock reports.  Or better yet, if you’re truly bored and want to get on the Internet, download an app on your phone that allows you find free hotspots available to the general public.  WIFI usage at an airport can get quite pricey rather quickly and it’s one of those things that can easily be avoided.

Airports are expensive and they’re probably one of the biggest money sinks of the entire traveling experience, but with a little perseverance and some helpful tips, you’ll find that you don’t need to drop all of your traveling funds waiting for your flight.  Try to sway temptation when you’re bored and remember that the more money you spend on that overpriced magazine, the less of your travel savings will be spent on actually traveling.

Planning for a secure financial future is a wise decision that you should make for your family. You need to be committed to building wealth and take charge of your money. By investing in the right ... END_OF_DOCUMENT_TOKEN_TO_BE_REPLACED

Cryptocurrency has become a popular investment option in recent years, as more people want to make profits from its white-hot rise. However, cryptocurrency investment is a risky endeavor. It is highly ... END_OF_DOCUMENT_TOKEN_TO_BE_REPLACED

Unsurprisingly, there are plenty of people out there jostling to help you spend your nest egg. All promise high returns, but not all that many deliver; in fact, you can quickly lose your super if ... END_OF_DOCUMENT_TOKEN_TO_BE_REPLACED

If you have recently taken up a position at a brand-new company and opened a 401k for the first time, you may be on the hunt for additional information when it comes to the various ways in which tax ... END_OF_DOCUMENT_TOKEN_TO_BE_REPLACED

Congratulations! You’ve worked hard this year. You made it through some tough days (or weeks or months). And now, if you’re lucky, you might end up with a holiday bonus. But before pocketing that ... END_OF_DOCUMENT_TOKEN_TO_BE_REPLACED

The United States of America is a destination most working professionals and travellers have on their list. Being one of the most visited countries in the world, it houses many tourist attractions, ... END_OF_DOCUMENT_TOKEN_TO_BE_REPLACED