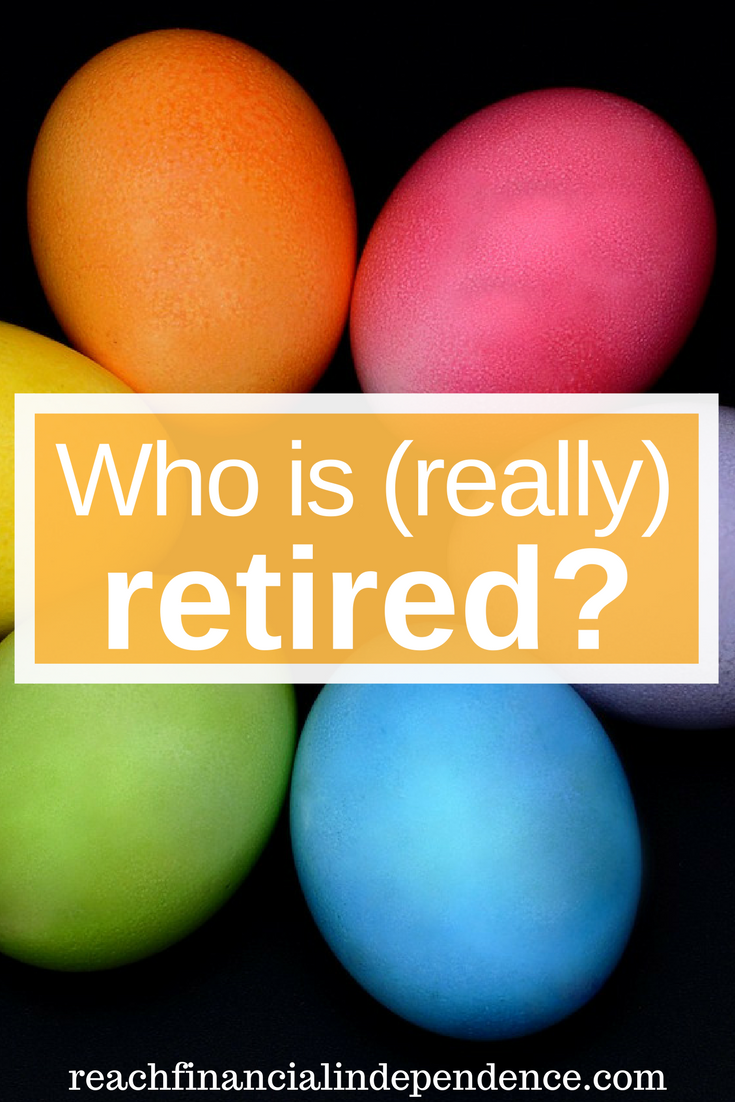 There is a poll at the end of this post, please vote! After all the buzz around the PFsphere about who is retired, early retired, not retired at all… I thought I’d present you the candidates and let you decide! You can also read PK’s post on Don’t Quit Your Day Job or Darwin’s Money to get an opinion of what is at stake. Are you retired if you live like a pauper on $10K/year and would need to work in order to afford any luxury, or healthcare, or clothing?

To me, being retired is not the same as being financially independent. If you are retired, you do almost nothing, play golf and get a pension check to live off. If you are financially independent, you do not have to work, because your bills are covered by your passive income. But you can still chose to be active with the things you like. Some people hate working for their boss. Being financially independent means no more bossy bosses. You can go to work when and if you want to. The common denominator seems to be working freelance, on contract or for yourself, and have no one on top telling you what to do. Since your bills are covered anyway, you can risk trying fun endeavors, and because you like what you do so much, you are good at it and end up making money off it.

Are you retired if you have a blog?

The polemic went as far as saying some of those people are not retired because they run blogs. My take on that is just like you used to write your memoirs on a piece of parchment when you (really) retired, if you run a blog as a hobby, and that hobby blog happens to produce some income, you are retired, good for you. If you put in an extra 20 hours/week to optimize the SEO, maximize Adsense revenue, and rely on that income to pay your bills, that is called working, self employment is still considered work.  Funny how some bloggers say they took a leap towards self employment when they go blogging full time, and others say they retired, even though both dedicate the same amount of time and effort to their blog.

So without further ado, who do you think is retired?

Jacob from Early Retirement Extreme: Retired at 33 with a monthly allowance of $700, eats lentils every day, takes cold showers, used to live in a trailer to save on rent, and recently accepted a job that allowed him to afford an apartment. Does not blog much since he has.

Mr Money Mustache: Can live on $25K a year, which his investment produce, but always takes on construction jobs to make money, saying he enjoys it and is retired because he does not need those jobs to live.

Joe from Retire by 40: Looks like he needs the extra income from his website as well as his wife’s salary to make his budget work. Couldn’t stop working online just now but does what he loves.

Sam from Financial Samurai: Still manages several websites and plans on making $200K/year in online income or go back to being employed. Works 20 hours a week on the websites even though he has the highest net worth of our early retiree panel so far and would not need that income to be fully retired, he does not want to touch a penny and live exclusively off the online income. Missed a tennis tournament because he had to be in town for business, and does not want to take more than 20 days holiday at a time.

Me: I don’t normally introduce myself as retired, just retired from the corporate world. Could live off investments without working another day, but need something to do with my days so I build up a future guest house that I would like to run, develop a 90 acres piece of land, and run a blog. All are fun projects that make money (or will make money some day, hopefully). I am thinking about doing some diving around the lake, which I enjoy, but as soon as those ideas pop up I imagine ways to monetize the diving, taking more people with me so I can dive for free. Making millions is not a dream of mine, but offsetting my costs of living with a guest house or the cost of diving with other tourists is.  I do travel for extensive periods, spent two months traveling around Morocco in 2010, 6 months Mexico/US in 2011, 6 month Europe in 2012, and even then found a way to offset some travel costs by writing travel articles for a few websites.

Grandpa and Grandma: They work over 20 hours a week as accountant and event planner for various charities, at the ripe age of 85. They do it for free but put the hours and dedicated work like they are employed. The charities are small operations that couldn’t function without them and even though they are getting tired, they feel like they have to keep helping, so they go to work even when they don’t want to. Are living off Grandpa’s government pension which is quite comfortable since he was an army general and fought in war time.

Let’s vote! I am new to this poll thing and not sure the results will show straight after you vote, so I will publish them on Friday recap next week!
PS this is not meant as an attack against how those people market themselves or view their lifestyles, just a fun way to see what the general consensus is.

The frugal Path, thank you!

Congratulations! You’ve worked hard this year. You made it through some tough days (or weeks or months). And now, if you’re lucky, you might end up with a holiday bonus. But before pocketing that ... END_OF_DOCUMENT_TOKEN_TO_BE_REPLACED

The United States of America is a destination most working professionals and travellers have on their list. Being one of the most visited countries in the world, it houses many tourist attractions, ... END_OF_DOCUMENT_TOKEN_TO_BE_REPLACED

When you were a kid, did you ever save quarters in a jar? Or set aside a portion of your allowance in a piggy bank for a big purchase, like a bicycle, a pair of designer shoes, or anything that mom ... END_OF_DOCUMENT_TOKEN_TO_BE_REPLACED

No matter where you are in your career, the potential of eventually retiring can be a daunting experience to think about. Are you saving enough for the future? If you are, when will you have enough ... END_OF_DOCUMENT_TOKEN_TO_BE_REPLACED

“Open an account with us – and get a free toaster!” These days, the bank toaster (clock radio, electric blanket, or other gadget) has become a cliché for consumer banking. But what you might ... END_OF_DOCUMENT_TOKEN_TO_BE_REPLACED

Watermelon. Corn-on-the cob. Fireworks after sundown. Amid all the fun, it’s easy to forget that the Fourth of July is more than just another summertime barbecue: It’s a reminder that independence is ... END_OF_DOCUMENT_TOKEN_TO_BE_REPLACED