Hi there! I finally made my way back to Guatemala, just on time for my one year anniversary. I had been away for over two months, and thankfully the trip back was less eventful than the way out via Cancun. I flew to Atlanta where I had a 12 hour layover, I thought about contacting a few bloggers there but it was from 8pm to 8 am and without transportation it seemed complicated to get out for dinner and then go back to the airport super early on my own.

Anyway, while trying to make it to the transit flight, I needed to print my boarding pass for the Atlanta-Guatemala flight, and the lady from Delta asked if I had a return ticket back to France. Now that was a first. I knew they could deny your boarding in Paris if you go to the US with a one way ticket but thought as long as you leave the US they couldn’t care less about the next country, especially if it is a small fish like Guatemala. Turns out the lady said I needed a visa! I showed her my many stamps, told her I always got there with a one way ticket then bought a return, and EU citizens get 90 days on arrival, she wouldn’t listen. She said if I was denied entry, Delta would be fined heavily, so I needed to buy a ticket out of Guatemala.

She assured me that any cheap e-ticket could be refunded within 24 hour of purchase, I asked for written confirmation, she said no. She let me see Delta’s website that said most e-tickets were refundable but didn’t clearly explain which ones. I told her there was no way I was buying a $3,000 one way ticket to Paris and risking it was non refundable, and finding myself stuck in Guatemala with my loss. I asked her why was I even allowed boarding in Paris, she said it was a mistake and I shouldn’t have. So I told her well, I can’t stay in the US on a one way ticket either so if you deny me boarding what happens?

“You have to fly back to France”

“And since it is your mistake for letting me board, who pays for that flight?”

“Why should I pay for your mistakes?”

“Well it is either that or you would get deported, and you don’t want to be deported”

“I don’t want to be deported, or stay one more day in the US, I want to board my flight to Guatemala for which I have a booked ticket!”

She then got bored, called someone in NY, and came back without a word, printed my boarding pass and wished me a nice flight within clenched teeth.

I was so relieved I left without asking why she changed her mind.

I was also coming back with a few concerns. First, we started renting out our house on Airbnb, and that has been going really well, but a couple was due early November and I wanted to get there before they did to make sure the house was impeccable, however BF had to do lots of things in Guatemala City so I was worried we wouldn’t make it on time.

Then, because in our absence, it rained A LOT. We already had weathered a little storm that damaged our boat back in March, but this time it was days of heavy rains, and even the handyman/maid couple warned us as they were worried about the lake rising and rising. Those are the before pictures. The water pump is in the small hut at the end of the beach, and the beach is a couple of meters wide. 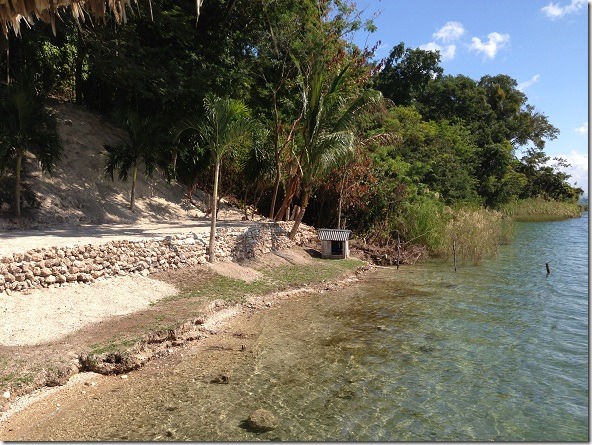 The French bowls field on the left is way out of the water and so is the deck.

When you walked under the deck, you had water up to the waist at most. 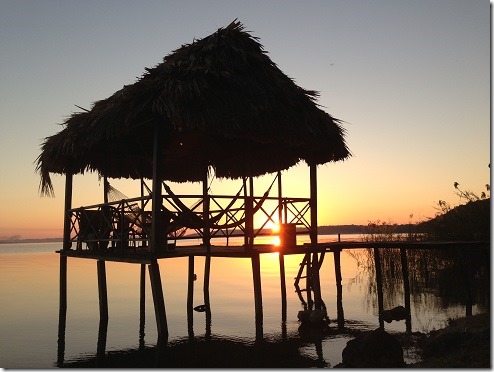 After a couple of weeks of rain, they decided to take the water pump away from the lake shore as it is not submersible and the water was getting close. The problem is it is not just plug and play, so now BF has to connect it again, that means buying new pipes and welding them, as well as new electric wires for the pump to work. Oh, and in the meanwhile, we don’t have running water. And neither do our Airbnb guests! Hence the urgency to get back and fix it before they get there.

Those are the after pictures. The deck is almost in the water, but we are of the lucky few because most neighbors have their decks under water. Now you can’t walk under the deck, the water has risen about 1 meter. The sunsets are still gorgeous though. 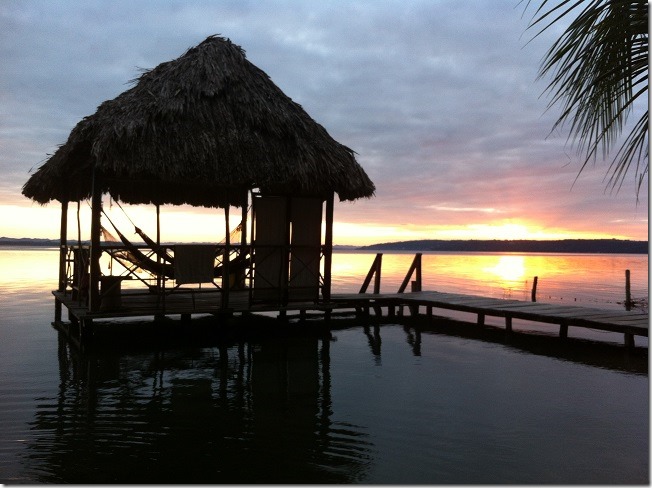 The beach is gone, the French bowls field is surviving but its containing stone wall partly fell in the water, and BF had to unplug the water pump and put it on the field, at the far left end. It is working hectically so far. 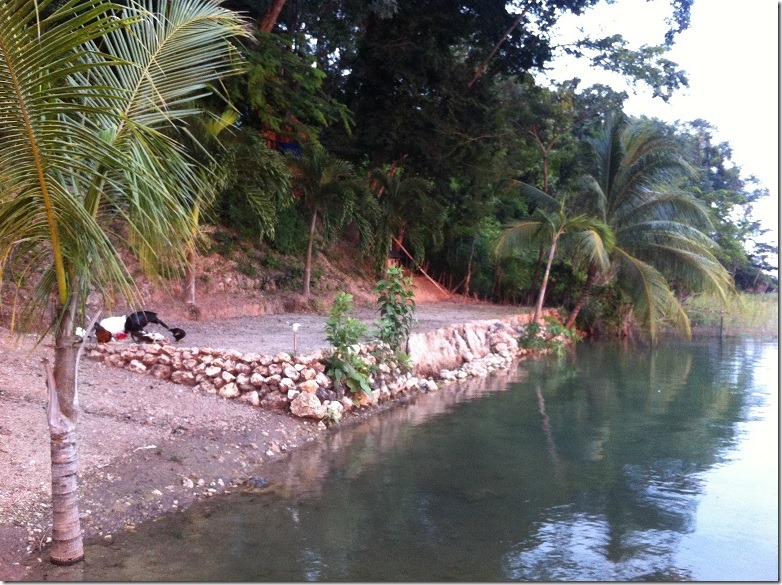 On the land development project, things have been going really well. While we were away, we left a lawyer in charge of following up with the bureaucratic process, and he got most of the plots approved by the cadaster! That is over 90 out of 100 plots, the remaining 8 or so need to go through another process as they are the closest to the shore, they need to pay a concession to the state and can’t be owned in full ownership, that is a lease. It was surprising as the whole property, including those 8 plots were previously held in full ownership, but it looks like they can recall previous crooked moves mistakes and put it back to a lease. It doesn’t matter much, as that part of the land will stay as green areas and maybe we’ll build a few amenities for people to camp, some hotels bungalows or commercial buildings… Either way, it will remain property of the condo and not be sold to private owners.

In the meanwhile, the 90+ plots have to go through one last register, called the Register of Property. That is where you go with your approved map from the cadaster and register the land to your name. In order to do that, we need another lawyer to write a super complicated document with the coordinates of all plots and how they are now going to be split from the original land, and what is remaining will be the public areas for streets and gardens. If they make one small mistake, it will be rejected and we’ll lose more time. BF has hired a friend who is extremely competent to handle that delicate matter so hopefully the first time will work out. And of course, you have to pay some registry fees on top of the lawyer’s fee, in total that should be another 3 to 4 grand, knowing the cadaster already charged around $1,500 to do pretty much the same job, locate the plot, confirm it exists and we legally own it. I don’t know what else needs to be done but that’s the way it works and it should take another 3-4 months, after which (fingers crossed) we will start selling our plots.

We already had an offer to buy the whole property for more than we put in so far, but rejected it. With proper titles, the plots will be worth way more than they are today, as potential buyers won’t need to go through that tedious process.

All in all, a lot has happened since one year ago, I’ll do a pictures update when things calm down a little so you can see all the progress. Oh, and the water thing? almost fixed. So if you want to rent a room near Tikal, Guatemala, just click here for details. Thanks!

What is happening on your little corner of the world?

Congratulations! You’ve worked hard this year. You made it through some tough days (or weeks or months). And now, if you’re lucky, you might end up with a holiday bonus. But before pocketing that ... END_OF_DOCUMENT_TOKEN_TO_BE_REPLACED

The United States of America is a destination most working professionals and travellers have on their list. Being one of the most visited countries in the world, it houses many tourist attractions, ... END_OF_DOCUMENT_TOKEN_TO_BE_REPLACED

When you were a kid, did you ever save quarters in a jar? Or set aside a portion of your allowance in a piggy bank for a big purchase, like a bicycle, a pair of designer shoes, or anything that mom ... END_OF_DOCUMENT_TOKEN_TO_BE_REPLACED

No matter where you are in your career, the potential of eventually retiring can be a daunting experience to think about. Are you saving enough for the future? If you are, when will you have enough ... END_OF_DOCUMENT_TOKEN_TO_BE_REPLACED

“Open an account with us – and get a free toaster!” These days, the bank toaster (clock radio, electric blanket, or other gadget) has become a cliché for consumer banking. But what you might ... END_OF_DOCUMENT_TOKEN_TO_BE_REPLACED

Watermelon. Corn-on-the cob. Fireworks after sundown. Amid all the fun, it’s easy to forget that the Fourth of July is more than just another summertime barbecue: It’s a reminder that independence is ... END_OF_DOCUMENT_TOKEN_TO_BE_REPLACED