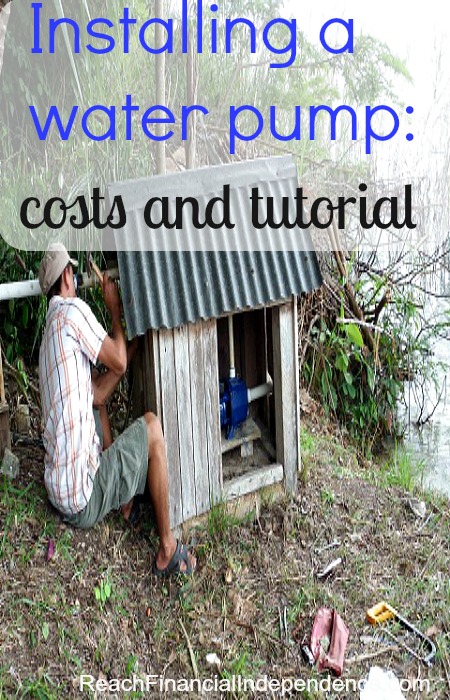 After going to the council to apply for a water permit and try to be connected to the public water, we decided to go with a water pump. First because the guys at the council office didn’t look like they were in a hurry to grant the permit. Also, it’s not like they have a price list available or something. They announced a price, then bargained it down, and I didn’t like it.

The costs of having public water

$110 upfront. For what, the guys just shrugged and said ”you have to pay”. After talking to our neighbor we realized it was plain corruption.

$500 pipes. To plug from the nearest neighbor with public water 500m away to my house. Again, should be covered by the council…

$300 labor. Conservative estimate, we would need to dig a whole for the pipes and cut a lot of bush first by the side of the road.

If a pipe bursts between my house and the neighbor’s, I have to fix it. If the neighbor changes his mind and doesn’t give me water, I have to re-wire. If the council is too broke to buy gas to pump the water (it happens), I have no water for a few days. If the council decides all waterfront properties will be denied public water, I can pay all that and have no more water in a few months.

Hence the pump. We went for an electric one, you can have a gas pump too, but you would have to keep a gallon of gas and think about it, electric seems easier. I won’t pretend like I know a great deal but I’ll share what I learned.

Costs of installing a water pump

$140 pump. This is the second smallest pump, which is supposed to pump 20 meter high. The property is about that high from the lake shore to the water tank so it may be a bit weak…

$125 water tank. Luckily, there was one left by the previous owner, about 250 gallon of capacity.

$130 electric wiring. There is a special plug ($30) in the house to turn on the pump. Electric wires ($100 for 100 meters, we didn’t use it all) go down to the pump. Those wires are protected by a plastic pipe, that was also already there, and after a good clean and some patience, we managed to put the wires inside and save a bit of cash.

$20 labor. The handyman helped us, so I put a bit of his salary here, but we mainly did the work. Take that, council!!

TOTAL: $605, a $405 saving and the freedom to access water whenever we please. I think we saved an extra $200 with the water tank and pipes already present.

Ok, on to the install!

First you need to install the plug for the pump. You can have it next to the pump or at your house, which is more convenient. Then the wiring comes out of it and has to go down to the pump. You should protect your wires from the rain by putting them in a plastic pipe. Ours is buried in the ground. Since you are digging already, you can put the water pipe next to the electric one.

You need to make a small hut to protect your pump too, and fix it well to the ground. Make a pipe to go out to the water, with a little filter at its extremity. The rest of the pipes go from the pump all the way up to the water tank. And then down to the house.

All in all, it was a full day of work because we fixed an old plumbing system. Having new pipes and new everything would have made life much easier. But costs more money.

We ended up burning some pipes to bend them or enlarge their extremities to fit other same sized pipes, and I am still not 100% sure that the install is leak-free.

After about 4 months of usage, everything is going well, no leaks to report and the electric bill is actually lower than expected.It is nice to be more independent from the council’s whims and rely on ourselves. And we saved $400.

Do you have solar panels, a generator, or other off the grid installations at home?

Planning for a secure financial future is a wise decision that you should make for your family. You need to be committed to building wealth and take charge of your money. By investing in the right ... END_OF_DOCUMENT_TOKEN_TO_BE_REPLACED

Cryptocurrency has become a popular investment option in recent years, as more people want to make profits from its white-hot rise. However, cryptocurrency investment is a risky endeavor. It is highly ... END_OF_DOCUMENT_TOKEN_TO_BE_REPLACED

Unsurprisingly, there are plenty of people out there jostling to help you spend your nest egg. All promise high returns, but not all that many deliver; in fact, you can quickly lose your super if ... END_OF_DOCUMENT_TOKEN_TO_BE_REPLACED

If you have recently taken up a position at a brand-new company and opened a 401k for the first time, you may be on the hunt for additional information when it comes to the various ways in which tax ... END_OF_DOCUMENT_TOKEN_TO_BE_REPLACED

Congratulations! You’ve worked hard this year. You made it through some tough days (or weeks or months). And now, if you’re lucky, you might end up with a holiday bonus. But before pocketing that ... END_OF_DOCUMENT_TOKEN_TO_BE_REPLACED

The United States of America is a destination most working professionals and travellers have on their list. Being one of the most visited countries in the world, it houses many tourist attractions, ... END_OF_DOCUMENT_TOKEN_TO_BE_REPLACED