Morning all! Today I have a guest post for you, from the lovely Tonya at Budget and the Beach. Enjoy! And remember you can still win $100 on the grocery giveaway 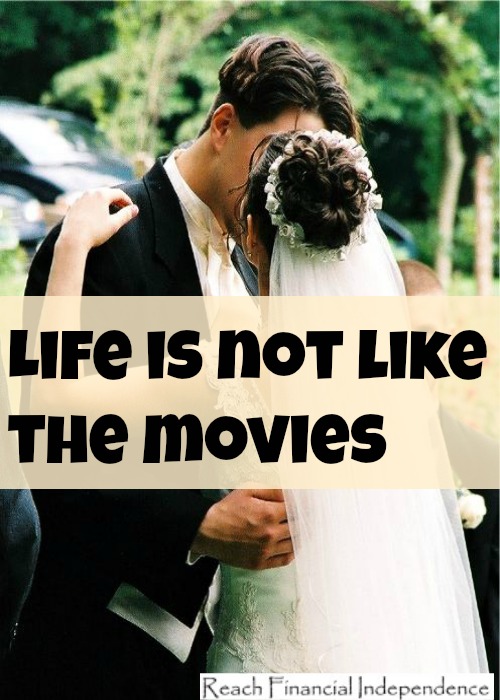 Tonya is a freelance video editor and blogger living in Los Angeles. She enjoys movies, running and playing beach volleyball. You can follow her personal finance journey on her blog at Budget & the Beach, and follow her on twitter at @beachbudget.

It’s always around this time of year that I tend to watch a ton of movies, both in the theater and at home (although with my budget this year, mostly at home).

I’ve always been a big movie buff from the time I was little. My dad used to take my brother and I just about every week. And no movie was ever off limits. We went as a family (this explains a lot) to see The Shining when I was 7 or 8 years old!!

It’s no wonder I went into the creative field for work. And I actually used to work on movie trailers at one point in my life, but that truly was the worst job experience of my life. Long story.

The one bad thing about movies though is that I often use them as kind of a crutch, or an escape from my own life. I think I fantasize just a bit too much about wanting to be certain characters in certain films. Maybe to avoid my own life?

But the reality is, life is not like the movies. I mean have you ever seen the romantic comedy where the guy buys the plane ticket at the last minute to France to tell the woman he’s madly in love with how he feels? Somehow the editors deleted the scenes where he opened up his credit card bill a month later and his jaw dropped on the floor. Not very romantic, is it?

Or the girl who sells everything to travel and just go find herself. What about work? What about her student loans? I suppose what happens in the film is she meets a guy who happens to be a prince, but is disguising himself as an ordinary guy so he can see what life is like as an average Joe. Of course they fall in love and she becomes a princess, so those student loans will be taken care of, no worries.

But still we watch, maybe trying to capture the essence of what these movies bring about: love, hope, letting go, happiness, traveling, being free…

And so I give you some of my favorite romantic comedy movies that have probably ruined my sense of reality for life…but I don’t care…I still love ’em.

50 First Dates– I think Drew Barrymore is so cute in this film, but what I really love about it is she lives this low key lifestyle in Hawaii, a place I have always fantasized about living. Ahh, just imagine waking up to the smell of plumeria flowers each day! Although not having your memory would kind of suck.

Bridget Jones’s Diary– Although she’s a hot mess, she is lovable and lives in London, a place I’ve never been. And it’s a story of a girl who IS a hot mess, but really gets her shit together, and ends up with sweet Colin Firth, who I think is adorable.

Leap Year– Pretty average and predictable romantic comedy, but I love the scenery in the movie (Matthew Goode), oh and looking at Ireland isn’t half bad either. Or is it Scotland? Whatever. It’s that whole travel mayhem/they fight but they really like each other crap that I just eat up (male readers are rolling their eyes right now)

The Wedding Planner– Again pretty average, but J-Lo lives in a cute San Francisco apartment, has a job she loves, and a pretty fabulous wardrobe. And she marries a hot doctor who looks like Matthew McConaughey. Yeah like that really happens.

When Harry Met Sally– No explanation needed. I tell you what, let’s just throw in You’ve Got Mail and Sleepless in Seattle too shall we? You ruined me Meg Ryan! You ruined me! Oh, and Tom Hanks? I love that man.

Under the Tuscan Sun– One of my absolute favorites! It’s a story of a comeback first and foremost, but she does so in the cutest village in Tuscany. Have you ever fantasized about living in Italy with cobblestone streets and drinking wine and eating pasta and gelato all day? Ahhh, just sounds so relaxing. And Diane Lane is absolutely radiant in the movie, even when she is supposed to kind of look like shit. Impressive.

Check out DVD Land if you’re interested in watching any of these movies. While many have opted for digital or streaming formats of their favorite films, there are clear advantages to owning a film in this format. With DVDs, there is no need to worry about your internet connection cutting out, or a file being accidentally deleted from your computer. Just play the movie and enjoy. It’s simple and effective, and you can find about 40,000 unique discs via their site. Whether it’s film, television, musicals, or even fitness, you should have no trouble finding the perfect DVD.

What are some of your favorite movies that have “ruined you?”

Planning for a secure financial future is a wise decision that you should make for your family. You need to be committed to building wealth and take charge of your money. By investing in the right ... END_OF_DOCUMENT_TOKEN_TO_BE_REPLACED

Cryptocurrency has become a popular investment option in recent years, as more people want to make profits from its white-hot rise. However, cryptocurrency investment is a risky endeavor. It is highly ... END_OF_DOCUMENT_TOKEN_TO_BE_REPLACED

Unsurprisingly, there are plenty of people out there jostling to help you spend your nest egg. All promise high returns, but not all that many deliver; in fact, you can quickly lose your super if ... END_OF_DOCUMENT_TOKEN_TO_BE_REPLACED

If you have recently taken up a position at a brand-new company and opened a 401k for the first time, you may be on the hunt for additional information when it comes to the various ways in which tax ... END_OF_DOCUMENT_TOKEN_TO_BE_REPLACED

Congratulations! You’ve worked hard this year. You made it through some tough days (or weeks or months). And now, if you’re lucky, you might end up with a holiday bonus. But before pocketing that ... END_OF_DOCUMENT_TOKEN_TO_BE_REPLACED

The United States of America is a destination most working professionals and travellers have on their list. Being one of the most visited countries in the world, it houses many tourist attractions, ... END_OF_DOCUMENT_TOKEN_TO_BE_REPLACED