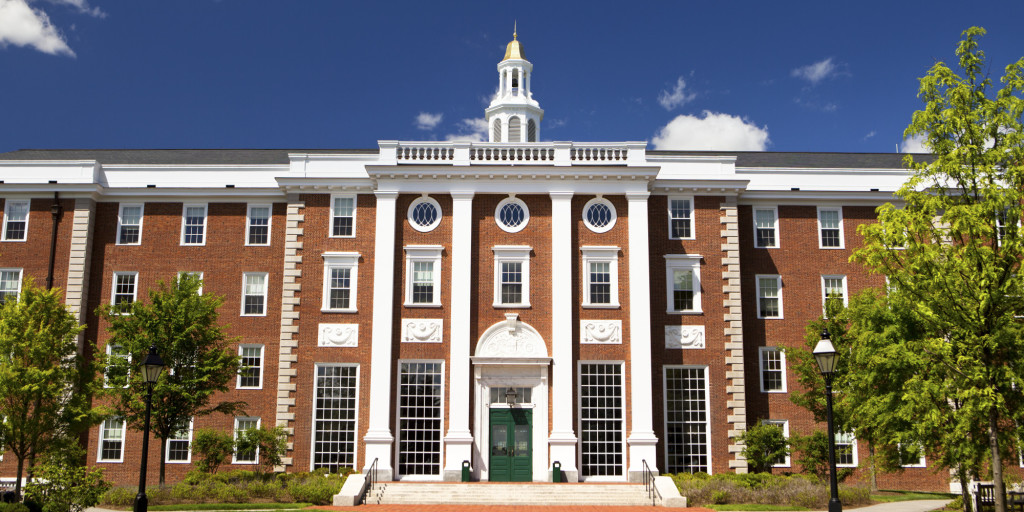 I read a great guest post on I Will Teach You To Be Rich from Jay Cross, a guy who PAID to apply for a dream job of his. It was a brilliant move, on his side and the recruiter’s. The recruiter, by putting a small barrier, was skimming the applicants and making sure he would only get the most motivated ones. The author, by paying the fee, already knew that most of his competition had been taken care of for him, so instead of giving up too, he kept going, knowing his odds to get the job had increased. It was a job for a top online marketer, which would have gotten thousands of applicants. Guess how many applied with the fee? Eighteen.

What does that have to do with Harvard? Well if you must know, a few years ago, I was toying with the idea of going back to school for a MBA. I was bored to death at my job, but I knew I could only justify taking time off work for two reasons: early retirement or pursuing further education, to get a better paying job, and reaching early retirement sooner.

I went to business school to get a master in business already, but in France the networking isn’t half as powerful, and it was right after a three year degree, I was 21 and had no professional experience. A US MBA would have been a fun experience and I was convinced I could find a way to pay for it like I got a company to pay for my two years of business school in France.

I started looking into it, more as a way to day dream away from a crappy job than as a real life plan. After an hour or so of research, I came back with the following.

– Then you have to write a killer essay to make the school want you.

– Two important people have to vouch for you and write recommendations.

I don’t remember the rest but there were a few more requirements like deadlines and paying for your degrees to be translated. The thing I liked was most schools had need-blind admissions, meaning you get in independently of your ability to pay for school, and then they sit with you to find a way to cover your tuition.

Then I looked at the rate of admission. When I passed the exam to get into my French business school, there were about 5,000 of us applying to a pool of schools, and the school I really wanted accepted 30-so students. I had less than a 1% chance to get in. And Harvard Business School, the best, most sought after school in the entire world, ranked #1 by the Financial Times and other respected institutions… has a 10% admission rate for last year. WHAT?

While my school has an easy entry exam pooled with a dozen more schools where any teenager can sit and give it a go for a small fee, Harvard has such a lengthy process its applicants fall like flies before they even apply.

Why such a high admission rate, compared to my average European business school? Because Harvard has put a myriad of small barriers to skim the applicants, like the guy with a fee to apply for a job.

There is the cost, $500+ between test fees and application fee, I’d say as far as $1,000 if your test center is far away and you bought books to prepare. But if you aren’t prepared to pay $500 to get in, are you prepared for a $60K yearly tuition? I imagine most students give up anyway, even with good GMAT scores, just to save $250. They apply to 2-3 schools and play it safe, targeting schools where they have a good chance of getting in.

Not that 550 GMAT student. He/she did not give up based on an academic score. He/she went on, wrote an essay, found two mentors to write a perfect recommendation letter, paid $250 to apply for a school who would screen through over 9.000 applications and select less than 100 students, and thought all the way “I can be one of them”.

That is how you get into Harvard. Or achieve anything you want in life.

You celebrate the barriers, because it only means that once you get over them, your chances of success are higher. Your competition, unfit for a small obstacle, gave up and left way for you.

Snatch the opportunity instead of sitting there dreaming.

Planning for a secure financial future is a wise decision that you should make for your family. You need to be committed to building wealth and take charge of your money. By investing in the right ... END_OF_DOCUMENT_TOKEN_TO_BE_REPLACED

Cryptocurrency has become a popular investment option in recent years, as more people want to make profits from its white-hot rise. However, cryptocurrency investment is a risky endeavor. It is highly ... END_OF_DOCUMENT_TOKEN_TO_BE_REPLACED

Unsurprisingly, there are plenty of people out there jostling to help you spend your nest egg. All promise high returns, but not all that many deliver; in fact, you can quickly lose your super if ... END_OF_DOCUMENT_TOKEN_TO_BE_REPLACED

If you have recently taken up a position at a brand-new company and opened a 401k for the first time, you may be on the hunt for additional information when it comes to the various ways in which tax ... END_OF_DOCUMENT_TOKEN_TO_BE_REPLACED

Congratulations! You’ve worked hard this year. You made it through some tough days (or weeks or months). And now, if you’re lucky, you might end up with a holiday bonus. But before pocketing that ... END_OF_DOCUMENT_TOKEN_TO_BE_REPLACED

The United States of America is a destination most working professionals and travellers have on their list. Being one of the most visited countries in the world, it houses many tourist attractions, ... END_OF_DOCUMENT_TOKEN_TO_BE_REPLACED