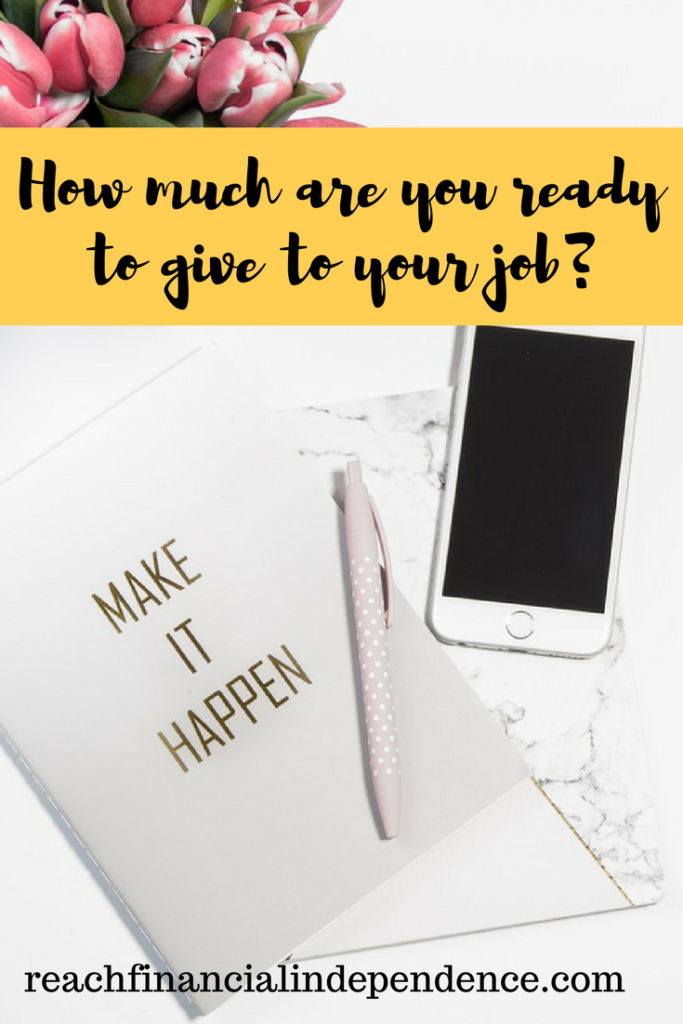 Mr and Mrs PoPs over at Planting our Pennies were talking last week about the guilt some people are feeling when  quitting their jobs. I really can’t relate, as to me a job is what it is, a job. My boss is using me to do a job and I allow him to use me in exchange for money. He would dispose of me as soon as I am not productive enough, or not making him enough money, without bating an eye. So why would I care about his feelings and putting the company in a complicated situation if I quit?

To put it simply, I never cared about my different jobs, they were just a way for me to eat and put a roof over my head. I like my current travel writing gig, but I wouldn’t compromise any of my personal health, balance, or anything other than the dedicate the minimum time required to do the job. Some people are the opposite.

I have reconnected recently with two persons who both have had for the past 10 years or so very demanding jobs. I am not talking Wall Street demanding, I mean really emotionally draining job. One is a social worker for people already classified as ”lost causes” and the other one is on the emergency team for an NGO, she has seen death, starvation, extreme crisis, and has had to deal with limited funds and means to help people.

Both are single ladies, in their mid-thirties and mid-forties, and both took those jobs because they felt strongly about the cause. They make very little money for the amount of work that they do, and for the impact that their job has on them. Both have been badly depressed for a few years. The oldest one never married or had kid. The youngest is single too and hasn’t settled. I understand that they found a vocation, that they deeply want to help people, but first, if they are in bad shape, they can’t help many people, and then, if their jobs make them miserable, why not quit and look for what makes them happy?

I was miserable at my old job too. I couldn’t stand the people I was working with, they loved to make my life impossible, so for the last few months I limited my interactions to saying ”hi” and ”good evening” at the end of the day. Why was I staying? Because I needed a working history to buy a home. When I did, I waited for a few more month, until it was bonus time, got my check and quit. I tolerated my horrible days because I had a goal. And that goal made all the pain go away, as the reward would be so sweet.

My two friends have a more honorable goal. They want to make the world a better place. But I am not sure they are doing anyone a favor by keeping a job that depresses them so much. There are many ways to help people. And many personalities. Some people can deal with death, like doctors or funeral home workers. They can go home and think about their life. I tried to tell them to change jobs, and both said something like ”if I don’t do it, who will”. I strongly disagree. If you don’t do it, someone who is more prepared emotionally will take over, and do a much better job.

Those two girls are extreme cases. But many people give too much to their jobs, and never receive anything in return. Both my mum and my sister bring some work home after working full time, and never get paid extra hours. Many friends are too afraid to ask for a raise. One even went on a business trip for a full month because he was promised a big bonus, came back and his boss invented a lie not to pay him! He went back to work on the following day, and has been ever since.

I chose to live MY life, for me, for my loved ones, certainly not for my job. I chose to be happy, before I can think about making my boss happy. And I am not afraid to quit and go look for something else if I don’t get what I think I deserve.

What about you? How much are you ready to give to your job?

Planning for a secure financial future is a wise decision that you should make for your family. You need to be committed to building wealth and take charge of your money. By investing in the right ... END_OF_DOCUMENT_TOKEN_TO_BE_REPLACED

Cryptocurrency has become a popular investment option in recent years, as more people want to make profits from its white-hot rise. However, cryptocurrency investment is a risky endeavor. It is highly ... END_OF_DOCUMENT_TOKEN_TO_BE_REPLACED

Unsurprisingly, there are plenty of people out there jostling to help you spend your nest egg. All promise high returns, but not all that many deliver; in fact, you can quickly lose your super if ... END_OF_DOCUMENT_TOKEN_TO_BE_REPLACED

If you have recently taken up a position at a brand-new company and opened a 401k for the first time, you may be on the hunt for additional information when it comes to the various ways in which tax ... END_OF_DOCUMENT_TOKEN_TO_BE_REPLACED

Congratulations! You’ve worked hard this year. You made it through some tough days (or weeks or months). And now, if you’re lucky, you might end up with a holiday bonus. But before pocketing that ... END_OF_DOCUMENT_TOKEN_TO_BE_REPLACED

The United States of America is a destination most working professionals and travellers have on their list. Being one of the most visited countries in the world, it houses many tourist attractions, ... END_OF_DOCUMENT_TOKEN_TO_BE_REPLACED