Hi there! Today is my birthday so BF and I are off to the beach for some R&R. In the meanwhile, enjoy our bike trip recap through Northern Spain!

Last time I published a first update about the French leg of our two months motorcycle trip, today we continue with Northern Spain on our way to Portugal. This is what the itinerary looked like roughly.

As I talked about last week, once we crossed the now inexistent border to Spain, it was a whole different world. The French countryside may be beautiful but it is really boring too. The small villages are dying, the shops closing one by one, if you get there around midday there is no one in the streets and most shops are closed, same things from Saturday afternoon to Tuesday. You mainly see old people around and the few young ones look like they are counting the days until they move to a bigger city. Spain is lively. In any village the town square will be full of people going for a stroll, for ice cream, for a chat, saying hi to neighbors or looking after their kids. There are plenty of small shops that still stand strong in front of the supermarkets.

The Northern coast is beautiful. I didn’t know it much, we first stopped in San Sebastian that has a lovely harbor and is known for its lively night life (tapaaaaaas!), then made our way to Bilbao, the largest town of the region. 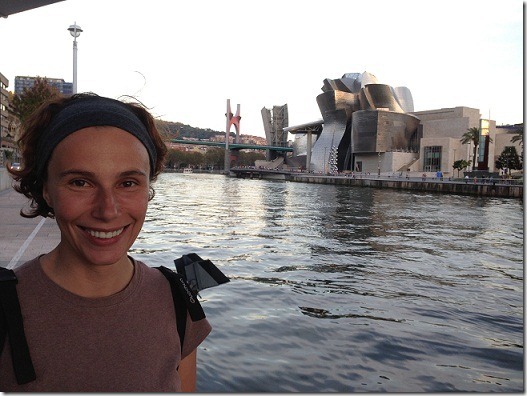 Bilbao is famous for its Guggenheim Museum, that was built 15 or so years ago. The place is amazing. It is built by the river and gives a whole new breath to the city. Along the river, a few other modern buildings and a nice promenade with beautiful bridges (one of them from the famous architect Calatrava) are the perfect place for a stroll at any time. We liked it so much we were there around 10pm then I went back for a run early morning and BF just sat admiring the Guggenheim for an hour.

Useless piece of information we needed to do laundry and were able to find a laundromat easily, whereas during our US trip it was almost impossible, once we even had to sneak inside a nicer hotel than the one we were staying at to do laundry there (for a fee, we didn’t steal!) but in Europe people live in such small quarters that it is pretty common that you don’t have a washing machine at home, hence the abundance of laundromats.

Leaving Bilbao we drove along the Northern coast of Spain, which was amazingly beautiful. I had never been to that region of Asturias and was in awe with the houses and the super cute little cellars that people build about two meters above ground, probably to prevent the rats from eating their harvests. They are made in wood and in some you could see the corn or green peas drying, getting ready for the winter. 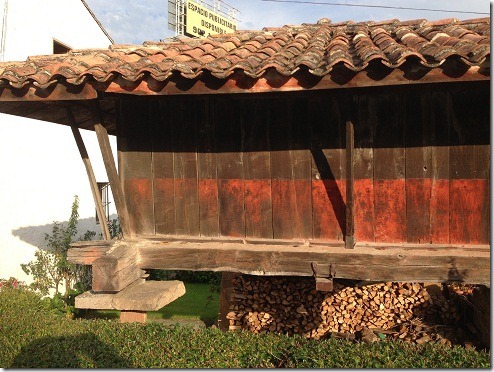 We liked the coast so much we decided we would camp there and found a small village with a remote beach to pitch our tent. By then we had reached a popular part of El Camino, the hiking trail to Compostela, and were passing by dozens of pilgrims every day. I was expecting a few to stop on the beach overnight as well but we were on our own. There was a very bright moon and a couple of fishing boats with huge spotlights about a mile from the shore that made it seem like 8pm when it was the middle of the night. 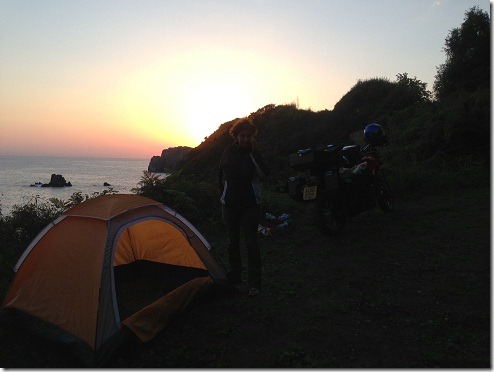 We didn’t sleep very well and were anxious to get a good night sleep the next day, so we reached Lugo, an hour before Compostela, and found a nice place to stay.

I had booked it online but it was just a booking, I hadn’t paid. The lady said I could pay the next day. And as used as we were to prepay or pay on arrival, the next day after breakfast, we just said goodbye and left! it wasn’t until the afternoon that I realized we left without paying the bill! I emailed the owner immediately and managed to deposit into their account the next day. Anyway, Lugo was a lovely city, it is a UNESCO Heritage site with one of the best preserved roman walls, you can go up the walls and go all around town walking (or running like I did at dawn), that is about two miles and a lovely stroll. 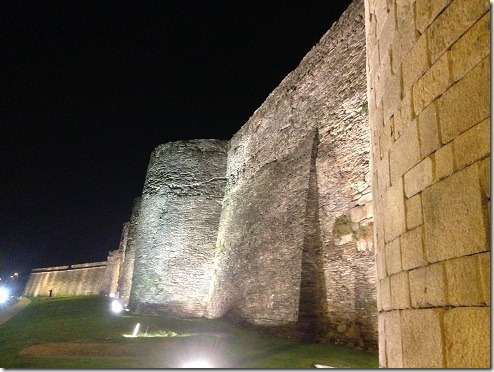 That part of Spain is also known for its gastronomy, we loved the fabada asturiana which is a white beans stew with chorizo, sausage and black pudding, and had seafood copiously washed with local wine.

Our next stop was Santiago de Compostela, the end of El Camino for all the hikers, some coming from as far as Eastern Europe, walking for months, for religious purposes or not. The last few miles were impressive, you would see pilgrims everywhere. They walk around with a small passport that they get stamped in churches on the way to prove they made the walk. BF had his Guatemalan passport stamped, the church lady was pretty concerned about putting a fake stamp on a real passport, and I thought we were not to be considered pilgrims as we didn’t walk a mile but the man was really proud of his stamp.

The church of Compostela was impressive, we arrived for the pilgrims’ mass and then the ritual is that you can go hug Santiago, the saint patron of the town, and visit his tomb. It was one of those big expectations moments, when you think about a special place for a while and get disappointed when it is not all you had imagined. I hope the pilgrims who walked six months for it had a better time. It started raining and we left pretty quickly, South to Vigo.

Vigo is quite a nice city, an old port that has been turned into a dynamic city center, they breed oysters but we didn’t try them, you can see all the oyster parks floating around the bay. There is a beautiful castle overlooking the town, and it was sunny again which lifted up our moods. 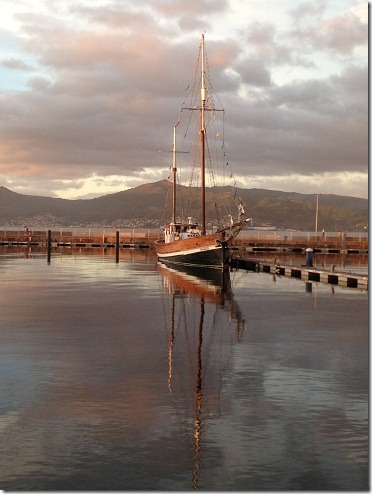 Once I get back home I will dive through my receipts and figure out the exact cost of the trip, for now I estimate that we spend about 100 euros ($130) a day for two. I am trying to cover it all with online income, as BF paid for last year’s trip around Europe, it is my turn to treat him.

My bike has a UK plate and I got a cheap $100 a year insurance policy that covers us for up to 90 days in Europe. If you are going to go on holidays overseas, make sure your bike or vehicle is properly insured!

In Spain the cost of housing was pretty similar to France, we used mainly booking.com to find hotels, and spent around 30 euros per night. On the beach we camped for free but one night we splurged and spent about 50 euros so I think we stuck with the 1/3 of the budget for housing, 1/3 to eat, 1/3 for transportation and activities.

You can find really cheap meals of the day at lunch time, they are called menú del día, between 5 and 10 euros generally, you have a first, a main, dessert, bread and wine. In small towns if two or more of you ask for wine they tend to leave the whole bottle on the table. It was hard to get back to riding the bike after such feasts haha. We would buy a few fruits and snacks for dinner, and generally breakfast was included with the hotel night.

Gas is a bit cheaper in Spain than it is in France, but we paid quite a lot for tolls so that evens out. At around $7 a gallon, it would still give most of you US readers a heart attack.

The Guggenheim costs 13 euros, and it is closed on Mondays. The church of Santiago de Compostela is free, they have other parts and a museum that is not.

As we are traveling for such a long time, we visit very few museums and paid attractions, it really has to be unique to get our attention.

That’s it, next, Portugal!

This post was featured on the Money Bulldog, Lifestyle Carnival, thank you!

Congratulations! You’ve worked hard this year. You made it through some tough days (or weeks or months). And now, if you’re lucky, you might end up with a holiday bonus. But before pocketing that ... END_OF_DOCUMENT_TOKEN_TO_BE_REPLACED

The United States of America is a destination most working professionals and travellers have on their list. Being one of the most visited countries in the world, it houses many tourist attractions, ... END_OF_DOCUMENT_TOKEN_TO_BE_REPLACED

When you were a kid, did you ever save quarters in a jar? Or set aside a portion of your allowance in a piggy bank for a big purchase, like a bicycle, a pair of designer shoes, or anything that mom ... END_OF_DOCUMENT_TOKEN_TO_BE_REPLACED

No matter where you are in your career, the potential of eventually retiring can be a daunting experience to think about. Are you saving enough for the future? If you are, when will you have enough ... END_OF_DOCUMENT_TOKEN_TO_BE_REPLACED

“Open an account with us – and get a free toaster!” These days, the bank toaster (clock radio, electric blanket, or other gadget) has become a cliché for consumer banking. But what you might ... END_OF_DOCUMENT_TOKEN_TO_BE_REPLACED

Watermelon. Corn-on-the cob. Fireworks after sundown. Amid all the fun, it’s easy to forget that the Fourth of July is more than just another summertime barbecue: It’s a reminder that independence is ... END_OF_DOCUMENT_TOKEN_TO_BE_REPLACED