Hello from Granada, Spain! I have been trying my best to stay off the computer while we are traveling around Europe, and so far think I am doing a good job, although BF has a different opinion. My awesome VA is doing most of the work behind the scenes and I had all my posts scheduled in advance, which is pretty much a miracle considering I always do things last minute. 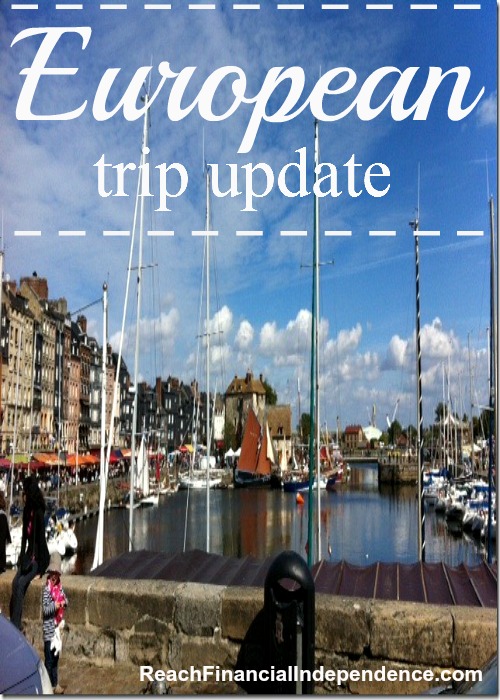 Back to the trip! I landed in Paris a couple of weeks before BF and had time to visit my family and friends, and run a few errands, the weather was lovely for the first 10 days or so, it felt like summer still and I really enjoyed it. I bought new jogging pants and went running every other day for 10K or so. It was quite strange, as the weather was perfectly mild, the streets perfectly asphalted and almost flat, compared to hot and humid Guatemala the runs were a breeze. No wonder the Kenyans who are used to running at high altitudes always win the marathons in Europe.

All the running made me hungry so I went completely out of control with the food, when you go to a place where you have been dreaming about the food for months, you want to try everything at once and it results in some odd meals. Cheese and oysters, anyone? I know, I’m gross.

Every single day I went to buy my baguette fresh off the baker’s oven and found some nice cold cuts or cheese to put in.

Another great thing is I had almost no trouble getting over the 8 hours of jet lag, or the three days it took me to get from Guatemala to Paris thanks to a big hiccup with the flights and eventually giving in and paying over $1,500 to cross the ocean.

After those couple of weeks, BF got there and we took off with the bike to Mont Saint Michel in Northern Brittany. It was lovely but the weather had turned to cold and rainy so on the bike it was a bit complicated to try and stay dry. We visited the bay of Mt St Michel where I hadn’t been in decades, then had oysters and mussels for lunch by the sea and spend the afternoon in St Malo, a lovely medieval coastal town. 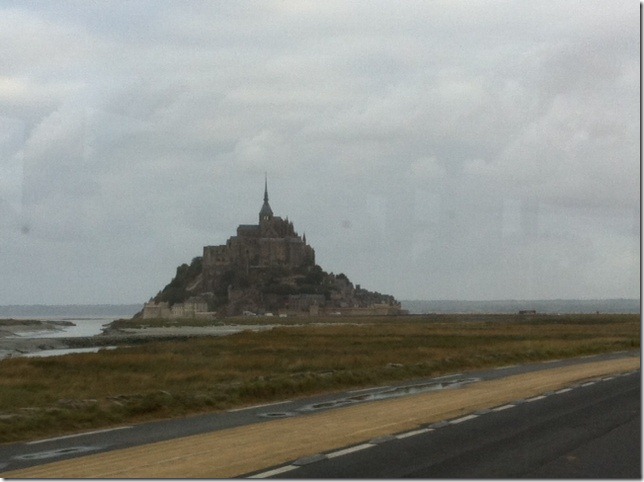 On the way from Paris we also visited the fishing port of Honfleur, and other coastal towns know as “Paris-on-the-sea” for their proximity to the capital and the number of Parisians who have a holiday home there. You have to get a bit further away to really taste the countryside. 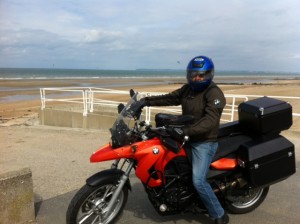 As a coincidence, we managed to meet with a French-Guatemalan couple of friends who was also holidaying around Brittany and we all stayed together for a night. BF and I then headed South to another oyster mecca, Marennes-Oléron. BF jokes that the French have an AOC for everything. That means Appelation d’origine controlée and it is like a brand that confirms the origin and quality of any food product, from Champagne wine that can only be made with grapes from the Champagne region, otherwise it is a sparkling wine, to Roquefort cheese that would otherwise be blue cheese, and so on, even the oysters had that brand stamp and the ones from the North were a specific brand, those one another one. We shared 3 dozen of oysters and a dozen of clams thoroughly washed with a bottle of regional white wine, everything was deliciously memorable.

After that we got to Bordeaux, one of the most beautiful cities in France, especially now that the historical center is all renovated, and met with another French-Guatemalan couple, the wife was a high school friend of BF he hadn’t seen in years. They took us to their holiday house in the surf beach of Hossegor, and I enjoyed a really nice run along the Ocean and a small interior lake. I may sound like a broken record but it was yet another occasion to have a beautiful seafood dinner with them. Too much food! 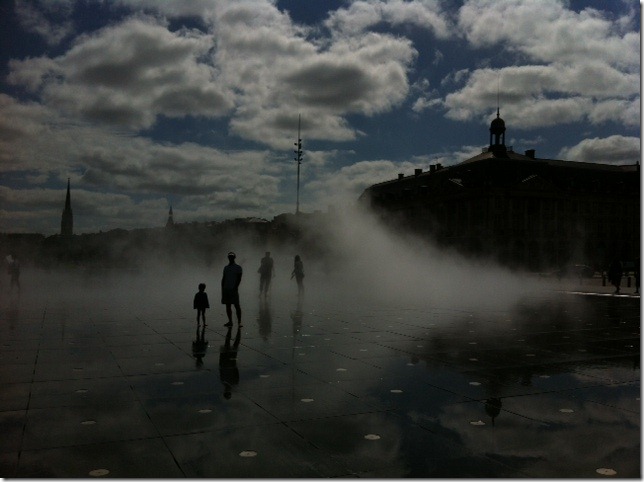 We left them to go the the Basque Country, the French part is very picturesque, you can visit the town of Espelette where they produce dried chilis, and many houses are painted white with the red chilis hanging from the windows, it is really beautiful and original, or the coastal town of Saint Jean de Luz with its beautiful beach and amazing summer houses. 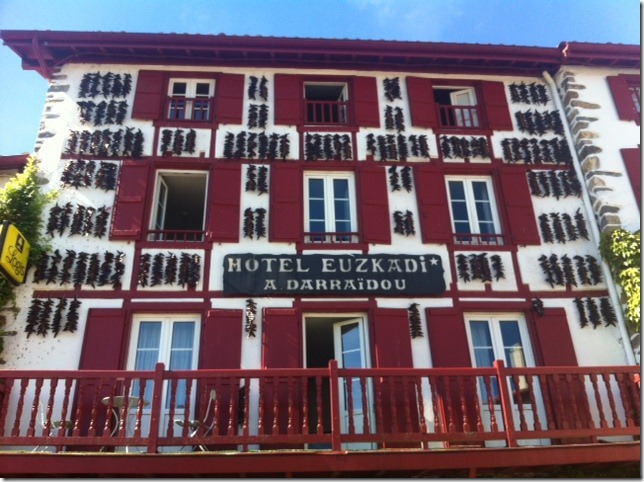 On the Spanish side, it doesn’t look as much as a perfect painting, but there is way more life. In France the countryside is almost empty while in Spain you will see people everywhere, harvesting, growing, selling their products… We passed quickly through San Sebastián and headed to Bilbao. 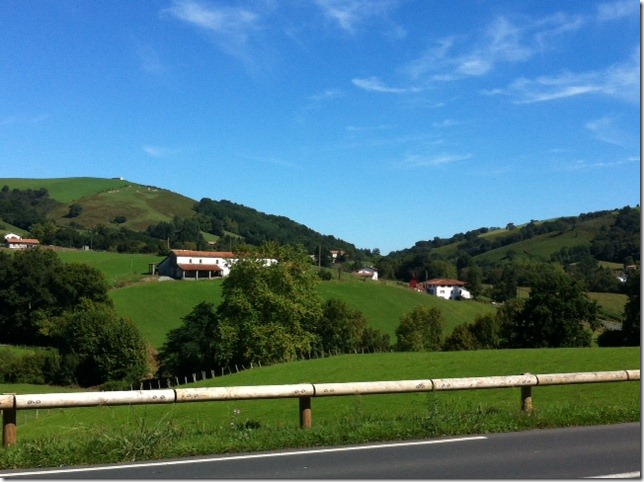 That’s it for France and the first leg of the trip, more next week!

I haven’t run a strict breakdown of the costs because I’d rather have a life while on holiday but we are spending around 100 euros a day ($130) for the two of us, split roughly 1/3 for the bike (tolls and gas), 1/3 to sleep and 1/3 to eat and do stuff. I am trying to cover expenses for both (as BF covered last year’s trip to Europe) with my online income.

In France we relied a lot on Hotel F1 which is a low cost chain of hotels from 19 euros a night, they are always very clean and functional but have a shared bathroom. The sleep up to three people so can end up cheaper than a hostel, but you need a car as they are generally in the suburbs. If you want your private bath, the next chain is Ibis Budget that has rooms from 35 euros a night with a tiny bathroom inside the room. You can book both and compare prices on Accorhotels.com. The bad part of being on a bike is you never know where you’ll end up at night because of the rain, traffic or random sightseeing that lasts longer than expected, so you don’t get a great deal when booking a hotel at 3pm for 7pm.

However, between those chains and then booking.com in Spain and Portugal, we have averaged around $40 a night which is pretty cheap for Europe. I am writing from a 25 euros ($30) hotel in Granada that is really well located and clean.

We generally eat a “meal of the day” for lunch, that is a special midday offer from restaurants, that costs about 12 euros in France and less than 10 euros in Spain and Portugal, for a first, a main and wine and bread. Then we hit the local markets for bread, cheese and fruits to snack at breakfast and dinner.

The cost of breakfast is something you should pay attention to as well, often for an extra 5 euros you get a room with “free breakfast”, yes, that is built in the price of the room but if you go to a café, it is likely to cost you more just for coffee and a croissant, when most hotels provide a breakfast buffet. Don’t expect a superb breakfast either, we only got eggs and cold cuts once, most of the time it is bread and jam and a few biscuits.

Again, if you know your dates in advance you should book an early bird deal, it is amazing how much tourism there is in Europe and we are in October, the peak season has been over for 6 weeks and still some hotels are fully booked.

You can read my travel tips about France here.

This post was featured on the Suburban Finance, Pearltrees, thank you!

Planning for a secure financial future is a wise decision that you should make for your family. You need to be committed to building wealth and take charge of your money. By investing in the right ... END_OF_DOCUMENT_TOKEN_TO_BE_REPLACED

Cryptocurrency has become a popular investment option in recent years, as more people want to make profits from its white-hot rise. However, cryptocurrency investment is a risky endeavor. It is highly ... END_OF_DOCUMENT_TOKEN_TO_BE_REPLACED

Unsurprisingly, there are plenty of people out there jostling to help you spend your nest egg. All promise high returns, but not all that many deliver; in fact, you can quickly lose your super if ... END_OF_DOCUMENT_TOKEN_TO_BE_REPLACED

If you have recently taken up a position at a brand-new company and opened a 401k for the first time, you may be on the hunt for additional information when it comes to the various ways in which tax ... END_OF_DOCUMENT_TOKEN_TO_BE_REPLACED

Congratulations! You’ve worked hard this year. You made it through some tough days (or weeks or months). And now, if you’re lucky, you might end up with a holiday bonus. But before pocketing that ... END_OF_DOCUMENT_TOKEN_TO_BE_REPLACED

The United States of America is a destination most working professionals and travellers have on their list. Being one of the most visited countries in the world, it houses many tourist attractions, ... END_OF_DOCUMENT_TOKEN_TO_BE_REPLACED