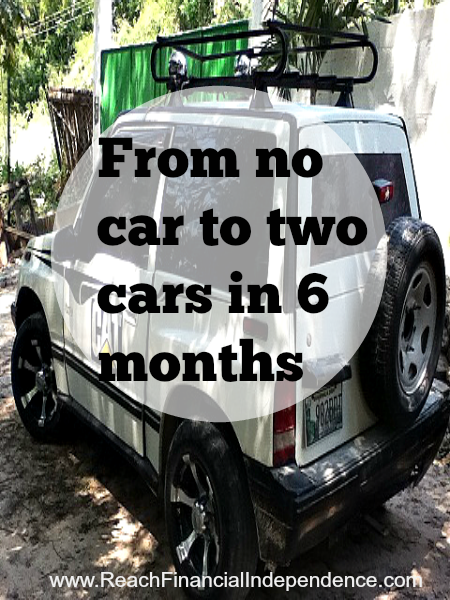 After not owning a car until I was 29, at the moment, I have two cars. One I bought at an auction in Miami, and brought back to Guatemala on a boat, which is a story in itself, that you can read more about here, and the other one is a beaten up Suzuki Samurai, from the good old year 1996, that we use to drive up and down our land to supervise the works. When I got back from Miami with a new to me car, “only” a 2006 model, so 10 years younger than the Suzuki, and equipped with (oh, bliss!) air conditioning, I thought that I would be able to ride it on the land instead of the old one. But unfortunately, after a couple of attempts, I ended up with three flat tires. Yes, three. Thankfully there is a guy in the village that will come on his motorcycle, take out your wheel, go back to his place, fix and inflate it for around £2 per tire. Living in Guatemala sure has its perks.

So back I was with the old car, breaking a sweat every time I had to go check on the workers, and seriously considering getting rid of it, and upgrading it for a newer one. Suzuki Samurai is use quite a bit by farmers around here, as they know they are reliable, and can endure pretty much anything. We have carried wood, concrete, five workers in the back, and much more, the thing is like a horse, it never gives up. So I was pretty sure I could get almost the price I paid for it if I tried to sell it. Unfortunately, we bought it when we had just arrived, and it looks like we paid a little over market for it.

Other options included selling it for parts, which may have landed a better price as parts are hard to get around here, then looking for someone to buy the scrap once all the good parts have been taken off. Sadly, companies like Sell the Car Ltd are almost non existent around here, and scrap metal buyers offer you a pittance, sometimes not even worth your while as they would charge you for the transportation back to their point of sale.

So in the end, we decided to make the best of it. Sure, it is not the nicest car around, but it does the job when we need it locally. I would never go more than 100 miles away from home with it, the journey would take twice the time and it would be tiresome, but it is great to have a sturdy little car that won’t break if treated badly. My little brother is learning how to drive with it at the moment, relieving me of the worry of having to lend him my nicer car. When it gets dirty inside, it is no trouble. And even the dog is allowed on the front seat, which he loves.

Financially, it is not much more expensive to run two cars, as both are paid for. And I hope we can still get a decent price once we have no use for it anymore.

Planning for a secure financial future is a wise decision that you should make for your family. You need to be committed to building wealth and take charge of your money. By investing in the right ... END_OF_DOCUMENT_TOKEN_TO_BE_REPLACED

Cryptocurrency has become a popular investment option in recent years, as more people want to make profits from its white-hot rise. However, cryptocurrency investment is a risky endeavor. It is highly ... END_OF_DOCUMENT_TOKEN_TO_BE_REPLACED

Unsurprisingly, there are plenty of people out there jostling to help you spend your nest egg. All promise high returns, but not all that many deliver; in fact, you can quickly lose your super if ... END_OF_DOCUMENT_TOKEN_TO_BE_REPLACED

If you have recently taken up a position at a brand-new company and opened a 401k for the first time, you may be on the hunt for additional information when it comes to the various ways in which tax ... END_OF_DOCUMENT_TOKEN_TO_BE_REPLACED

Congratulations! You’ve worked hard this year. You made it through some tough days (or weeks or months). And now, if you’re lucky, you might end up with a holiday bonus. But before pocketing that ... END_OF_DOCUMENT_TOKEN_TO_BE_REPLACED

The United States of America is a destination most working professionals and travellers have on their list. Being one of the most visited countries in the world, it houses many tourist attractions, ... END_OF_DOCUMENT_TOKEN_TO_BE_REPLACED