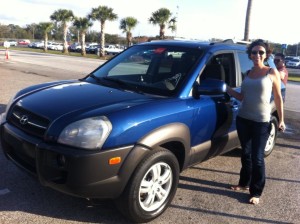 As I talked about earlier, I am now the proud owner of a 2006 Hyundai Tucson, that I bought on a whim during my holidays in Miami. I had no idea I would come back with a car, the main reason we went look for one was so BF could replace his, but then I said why not and we came back with two cars!

When we arrived in Miami we started scouring the car dealerships, as he wanted a Nissan and I wanted a Toyota RAV4 with 3 doors. The problem is they don’t make RAV4s with 3 doors anymore, and haven’t since 2005. Buying a 9 year old car from a dealer in the US is almost impossible, as people replace their cars much sooner. We talked to the worst salesman I ever met at the Toyota dealership and gave up after 5 minutes as he tried to sell me a $18,000 5 door car.

Then a friend who is a car dealer said he would look for what we wanted at the car auction in Orlando. That is where dealers go shop for cars, so you usually get a great deal.

So we had a quick look online to see which day would be good to go, and spotted two cars on the next day. We packed an overnight bag, jumped in the rental car and drove four hours to Orlando. After spending the night at a hotel, we arrived at the auction. 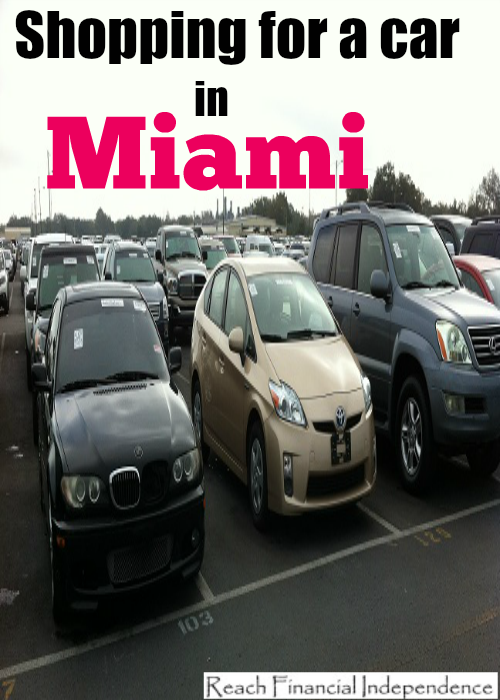 The cars waiting to be auctioned

The auction field is like a supersized parking lot, with thousands of car waiting to be auctioned. It is impressive. Each car is given a lane to be auctioned, and there are 20 lanes with around 200 cars each just for a half day. 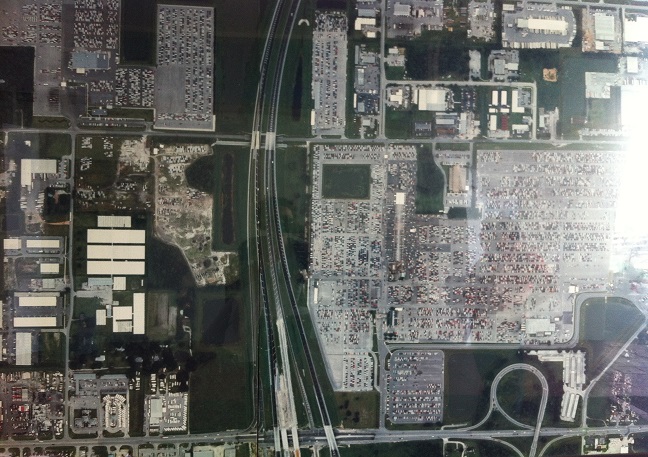 Auction site seen from the sky

Each car is either sold or discarded in a matter of minutes. A guy at each lane is screaming into a microphone in an ineligible way what I assume was something like “This car starts at $3,000, anyone at $3,000… $3,500 on my left, do I hear $4,000?…etc.. sold! For $5,200 to Bob!”. But you really don’t understand what they are saying, they speak so fast I wonder how they can last four hours straight. They speak like the guys on the radio telling you the terms and conditions of an ad, if they were on steroids. Thankfully, you have a screen to see how the bid is going. 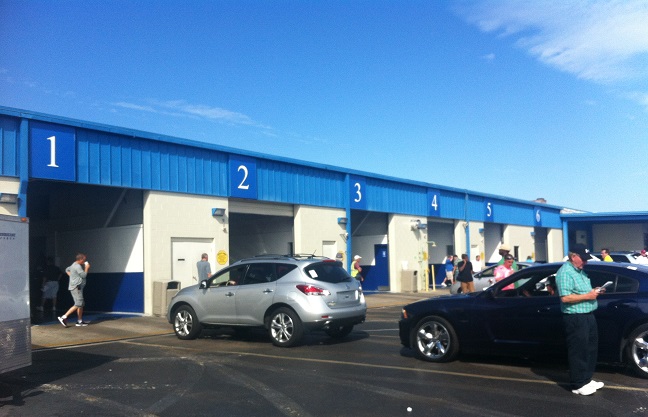 We went to see my car and it was in pretty good shape for the price, so I decided to give it a try. As we were walking around the parking lot, we saw my car getting in to be auctioned! We had to run after it and joined the auction at the last minute, to win!

Then BF won his car as well and we had to go draft a cashier´s check to pay the cars. 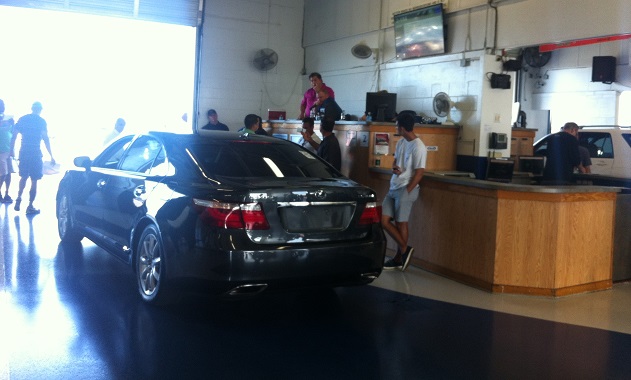 The auction only lasts a minute or two

With the cost of travel and a hotel night in Orlando, his fee, the car auction company’s fee, a brand new set of front disks and brake pads which according to the dealer were the only thing the car needed it came up to $5,190.

We drove the car back to Miami, with short term insurance like the one Insure Daily provides, and went to a place that ships cars all over Central America. It cost $750 to put the car on a boat to Guatemala and do the legal paperwork to ship it. Then I will have to pay import taxes once it gets to Guatemala, around $1,000, for a grand total of around $7,000.

Looking at online ads in Guatemala, similar cars sell for around $10,000. Due to heavy taxes, cars are more expensive here than in the US. And the bad thing is, because many cars come from the US after a bad accident and are pimped up cosmetically to look like they were never damaged, you can get a bad surprise if you buy a used car. In the US auction, what you see is what you get.

As a proof, here are the cars that are going to ship together with mine.

Then they come to Guatemala, spend a week at the mechanic’s, all the metal is straightened up and the car is put on the market like it never was in an accident.

Those cars were not even starting, so a guy was moving them around with a machine.

They ship in fruit containers, as Guatemala ships bananas to the US, and the containers come back full with cars, no space gets lost! 🙂

Anyway, that little unexpected expense almost doubled the cost of our Miami holiday but I think it is a good car that will be great here. My old Suzuki Samurai is really hard on the back and has no AC, and if I want to start offering tours to the tourists renting my little house, I need something better.

Planning for a secure financial future is a wise decision that you should make for your family. You need to be committed to building wealth and take charge of your money. By investing in the right ... END_OF_DOCUMENT_TOKEN_TO_BE_REPLACED

Cryptocurrency has become a popular investment option in recent years, as more people want to make profits from its white-hot rise. However, cryptocurrency investment is a risky endeavor. It is highly ... END_OF_DOCUMENT_TOKEN_TO_BE_REPLACED

Unsurprisingly, there are plenty of people out there jostling to help you spend your nest egg. All promise high returns, but not all that many deliver; in fact, you can quickly lose your super if ... END_OF_DOCUMENT_TOKEN_TO_BE_REPLACED

If you have recently taken up a position at a brand-new company and opened a 401k for the first time, you may be on the hunt for additional information when it comes to the various ways in which tax ... END_OF_DOCUMENT_TOKEN_TO_BE_REPLACED

Congratulations! You’ve worked hard this year. You made it through some tough days (or weeks or months). And now, if you’re lucky, you might end up with a holiday bonus. But before pocketing that ... END_OF_DOCUMENT_TOKEN_TO_BE_REPLACED

The United States of America is a destination most working professionals and travellers have on their list. Being one of the most visited countries in the world, it houses many tourist attractions, ... END_OF_DOCUMENT_TOKEN_TO_BE_REPLACED