On my quest of finding alternative investments to generate passive income, I was first drawn to foreign exchange, also known as Forex. Why? Because I traveled a lot, was a bit aware of world events, and thought I knew where the currencies were going. There are lots of sites out there that help you get started with online currency trading in just a few clicks. They have tons of charts and even training materials so you can learn a bit more about the technical aspect of trading. I remember reading a lot about it, and starting a demo account to practice. While my predictions were generally pretty accurate over the long term, weathering the short term market swings was not my forte. 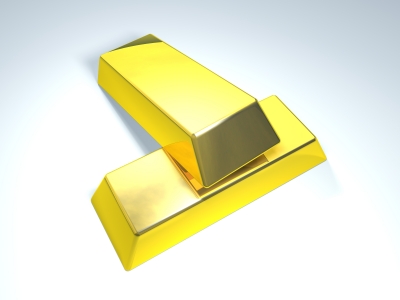 The Forex company happened to have an option to trade gold. I had never thought about trading gold before. I imagined gold only came in the form of a physical bar and by no means could be traded online. It intrigued me, and after studying some more, I learned that gold was an hedge against financial crisis, that when the dollar got weaker gold was usually getting stronger, and if you held dollar positions it made sense to hold the inverse position in gold, so if one goes up and the other down, you still are not doing too bad as things even out.

As a result of my long hours of analysis and reading economical data, I was convinced that the price of gold would go up, with the increase of demand as a crisis hedge, and the rise of the middle class in countries like India, who buys a lot of golden jewelry for wedding and other important occasions. So back in 2006, I bought 200 ounces at $585. That was a margin purchase, and I started tracking my gold daily. Every time the ounce went down by $1, I lost $200. A $10 swing is more than normal in any given trading day. Imagine coming back home at the end of the day and finding out you just ”lost” $2,000!

After a few sleepless days, the market went up again and I made an exit with a little profit. I could breathe again.

Lesson learned: only invest money that you can afford to lose, and if you think your position is solid, do not watch it daily, the market swings can have you make a costly emotional decision!

Planning for a secure financial future is a wise decision that you should make for your family. You need to be committed to building wealth and take charge of your money. By investing in the right ... END_OF_DOCUMENT_TOKEN_TO_BE_REPLACED

Cryptocurrency has become a popular investment option in recent years, as more people want to make profits from its white-hot rise. However, cryptocurrency investment is a risky endeavor. It is highly ... END_OF_DOCUMENT_TOKEN_TO_BE_REPLACED

Unsurprisingly, there are plenty of people out there jostling to help you spend your nest egg. All promise high returns, but not all that many deliver; in fact, you can quickly lose your super if ... END_OF_DOCUMENT_TOKEN_TO_BE_REPLACED

If you have recently taken up a position at a brand-new company and opened a 401k for the first time, you may be on the hunt for additional information when it comes to the various ways in which tax ... END_OF_DOCUMENT_TOKEN_TO_BE_REPLACED

Congratulations! You’ve worked hard this year. You made it through some tough days (or weeks or months). And now, if you’re lucky, you might end up with a holiday bonus. But before pocketing that ... END_OF_DOCUMENT_TOKEN_TO_BE_REPLACED

The United States of America is a destination most working professionals and travellers have on their list. Being one of the most visited countries in the world, it houses many tourist attractions, ... END_OF_DOCUMENT_TOKEN_TO_BE_REPLACED