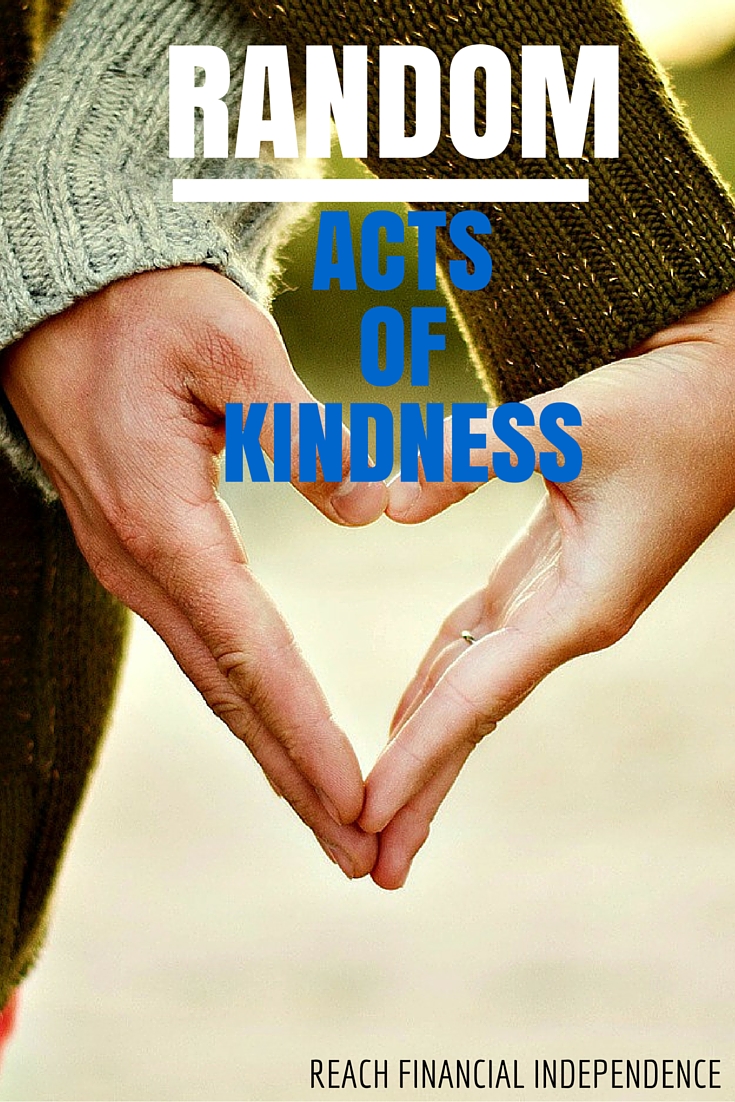 Today, I have been the recipient of not one, but two Random Acts of Kindness!! We were in the middle of nowhere, riding our bike, and had been looking for a gas station for quite a while. The nice thing with recent bikes (mine is 2010) is that you can check on the screen how many miles are left, and not guesstimate and stress out even more. The reader said 2 miles. We were riding some more… I had my “told you so” face on, since BF refused to fuel some 50 miles back, saying we should minimize the stops.

So here we were, looking at the screen going from 2 miles left to 1, and reaching eventually a worrying 0. That’s when we asked a lady on a bicycle if there was a gas station nearby that we didn’t spot. Sometimes there are small garages a bit out of the way. We were in rural Poland, and didn’t understand a word of what the lady said. But she signed us to keep going and about half a mile down the road, we saw it… and it was closed! On Sunday, the Poles rest… I was already picturing us camping by the gas station, waiting for the station to open on Monday, and me lecturing BF all night.

A few minutes after, the lady on the bicycle reached us. She started talking and signing some more, and was joined in her conversation by another neighbor. They both seemed confident that there was another station not too far but we had trouble understanding where exactly. After a 5 minutes monologue, the lady told us to follow us. And another guy, driving his car, looked like he wanted us to follow him too. The road was a steep way up, and the lady on the bike was obviously making a tremendous effort to keep up with us, comfortably seating on our motorcycle. BF was worried about wasting gas going that slow. Yet the lady was our only hope.

After what felt like forever, we arrived without drying out at a small garage who was selling gas. The lady signed and waved us goodbye, and off she went. That is when we noticed that the guy on the car had also followed us and made sure we found the station ok. Those two people went out of their ways, gave us their time and made a physical effort for the lady to ride uphill, and a financial one for the man to drive his car, just to make sure the two forgetful tourists were happily filling their tank.

We have been on the road for about a year and a half, and I can’t begin to count the number of Random Acts of Kindness that we have witnessed. They feel awesome, as much when you give them than when you receive them. Last time we performed one, this old man was driving his broken car, and asked his just as old wife to help him by pushing the car from behind. We got down of our bike to help her push and could read gratitude in her eyes, in spite of the language barriers. Random Acts of Kindness make you feel better about human kind. They are so easy and universal. They bring people together.

I don’t think they apply to a certain religion or belief, but I love how the world is such a better place after they are performed.

Planning for a secure financial future is a wise decision that you should make for your family. You need to be committed to building wealth and take charge of your money. By investing in the right ... END_OF_DOCUMENT_TOKEN_TO_BE_REPLACED

Cryptocurrency has become a popular investment option in recent years, as more people want to make profits from its white-hot rise. However, cryptocurrency investment is a risky endeavor. It is highly ... END_OF_DOCUMENT_TOKEN_TO_BE_REPLACED

Unsurprisingly, there are plenty of people out there jostling to help you spend your nest egg. All promise high returns, but not all that many deliver; in fact, you can quickly lose your super if ... END_OF_DOCUMENT_TOKEN_TO_BE_REPLACED

If you have recently taken up a position at a brand-new company and opened a 401k for the first time, you may be on the hunt for additional information when it comes to the various ways in which tax ... END_OF_DOCUMENT_TOKEN_TO_BE_REPLACED

Congratulations! You’ve worked hard this year. You made it through some tough days (or weeks or months). And now, if you’re lucky, you might end up with a holiday bonus. But before pocketing that ... END_OF_DOCUMENT_TOKEN_TO_BE_REPLACED

The United States of America is a destination most working professionals and travellers have on their list. Being one of the most visited countries in the world, it houses many tourist attractions, ... END_OF_DOCUMENT_TOKEN_TO_BE_REPLACED