Morning! Today I have a post from Betsy, let me know if you would like to guest post on RFI, I publish a guest post every Wednesday. Betsy writes as CollegeMom at ConsumerFu.com. She is the mother of two college age daughters. She and her husband live on four acres of old farmland with two dogs, a cat and a large number of gardens where she works hard on her farmer’s tan all summer. You can also find Betsy on Pinterest and Twitter.

Every now and then when I use the word frugal to describe our family’s lifestyle the person I’m talking with stares at me with a look of disbelief. I think there is a misconception out there that those of us who embrace a frugal lifestyle do so because we are deep in debt, don’t make much money or are lazy and out of work. We are none of these things.

Being frugal doesn’t mean being cheap. It doesn’t mean always choosing the least expensive option when you need to spend more to accomplish your objective. Frugal doesn’t necessarily mean destitute and for many a frugal lifestyle is a choice, not a requirement. If I had to come up with a substitute term or phrase I would say we live a common sense lifestyle.

For us being frugal has come in stages. We were more extreme when we were younger and income was limited. We knew that braces and educational expenses were looming for our young children. If we wanted to afford these things without going into debt we would have to scrimp and save. So we did.

The most important thing we’ve done along the way to financial independence is to talk our decisions out with our two daughters. Often, these conversations were over their heads, but we wanted them to understand why we made certain financial choices. They didn’t always know the intricate details of every decision, but we tried to explain our logic. I can illustrate this with the purchase of their first shared car.

In the spring before our oldest daughter’s senior year in high school we paid $16,500 cash for a two-year-old Honda Element with low mileage. It wasn’t the prettiest of cars, but it was in good condition, reportedly would hold its value and it was a little tank. Our oldest drove it to and from work and school for a year and then the car sat for a year waiting for daughter #2 to learn to drive. This past year, she drove it back and forth to her high school. In three years we put about 10k miles on the car.

In May, daughter #1 loaded up the Element with all her worldly possessions and moved to another city to take an internship. She planned to drive the car her junior and senior years in college and then once again pass the car off to her sister. Her plan was to then buy something that would be suitable for a young professional. At least, that was the plan. 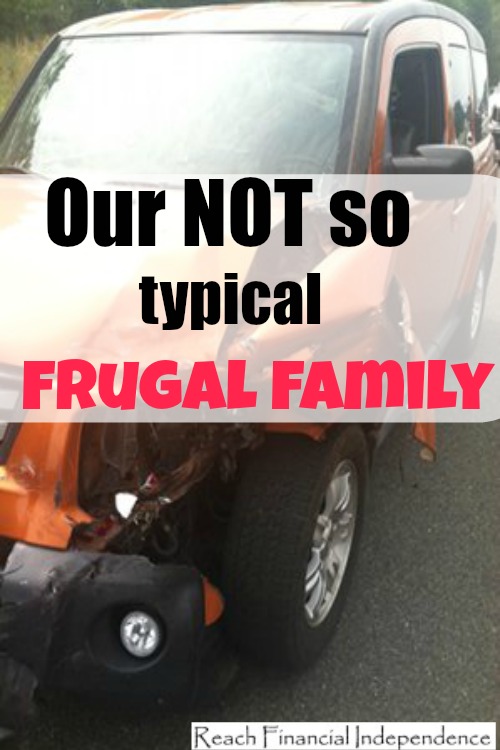 Two and a half hours after pulling away from our home, she was hit from behind by a large work van. This triggered a five car pileup and in a split second all those plans went out the window. Fortunately, nobody was hurt and everyone was insured. It was determined that the person who ran into our daughter was following too closely and he was faulted for the accident. It was determined the car was a total loss and we were given $15,000 to replace it.

That’s right! We wound up paying only $500 each year for the use of that car. By paying cash, we avoided any interest on a loan. The only way this car cost us more than another model is in the poor gas mileage, but when we’re picking out a car for our children to drive safety trumps mileage. The other factor that comes into play is how well the car holds its value.

Here is where talking things over with our daughters comes into play. As my husband and I were at home worrying about how we would manage buying a car with our daughter in another city, she was doing her homework. She was test driving and doing research on safety ratings and gas mileage of the cars she thought were good looking. When it came time to buy, her organization and research allowed her to deliver a pitch that blew us away.

She told us she wanted a new car that would last her at least ten years and looked like something a professional would drive. She was armed with Insurance Institute ratings, Kelley Blue Book resale estimates and gas mileage information. Not only that, but she’d found a local dealer that was running a special on certain (less popular) colors of the model she wanted.

Basically, all those conversations about money and why we made the decisions we did had paid off. We did not have to explain what she should look for in a car. She already knew. We came out of pocket an additional $2500 for our daughter to have a new car that is safe, gets excellent mileage, and holds its value.

Why not make her pay for the car? Well, she already works two jobs – an unpaid internship and a paid job at the university she attends. She has been on the Dean’s list all four semester’s at a major university and maintains a 4.0. She pays a lot of her living expenses, buys her own clothes and is one of the most responsible 19 years olds I’ve ever known. I would rather she gradually accept the financial responsibilities of adulthood so she has a better chance of maintaining her grades.

A lot of times being frugal doesn’t mean buying the cheapest thing you can find. It doesn’t mean forgoing safety and comfort just to save a buck or two. We could have bought a clunker three years ago and saved a lot of money. Instead, we purchased a safe car that kept our daughter alive and we bought a car that was a good value at the time and held its value over time so our insurance settlement was much higher than it might have been.

Maybe we don’t look like the typical frugal family, but it has been our common sense approach to our family’s finances that has allowed us to save enough to pay cash for things we might otherwise only dream of owning. It has been our constant communication about finances with our children that will ensure these values are passed to the next generation.

This post was featured on Mom and Dad Money, Common Cents Wealth, thank you!

Planning for a secure financial future is a wise decision that you should make for your family. You need to be committed to building wealth and take charge of your money. By investing in the right ... END_OF_DOCUMENT_TOKEN_TO_BE_REPLACED

Cryptocurrency has become a popular investment option in recent years, as more people want to make profits from its white-hot rise. However, cryptocurrency investment is a risky endeavor. It is highly ... END_OF_DOCUMENT_TOKEN_TO_BE_REPLACED

Unsurprisingly, there are plenty of people out there jostling to help you spend your nest egg. All promise high returns, but not all that many deliver; in fact, you can quickly lose your super if ... END_OF_DOCUMENT_TOKEN_TO_BE_REPLACED

If you have recently taken up a position at a brand-new company and opened a 401k for the first time, you may be on the hunt for additional information when it comes to the various ways in which tax ... END_OF_DOCUMENT_TOKEN_TO_BE_REPLACED

Congratulations! You’ve worked hard this year. You made it through some tough days (or weeks or months). And now, if you’re lucky, you might end up with a holiday bonus. But before pocketing that ... END_OF_DOCUMENT_TOKEN_TO_BE_REPLACED

The United States of America is a destination most working professionals and travellers have on their list. Being one of the most visited countries in the world, it houses many tourist attractions, ... END_OF_DOCUMENT_TOKEN_TO_BE_REPLACED