You may have noticed that things have been pretty quiet over here, and to be honest, I think they’ll remain quiet until the end of the year. A lot has happened in “real life” and that has taken up most of my energy, so for the past month I was either crashing in bed exhausted or binge watching TV shows to avoid thinking about a never ending todo list of online stuff I didn’t want to deal with. And I am alright with that. Those blogs are meant to be fun, I don’t treat them as a business, at least for now, and so real life will always have first place. Also, for some reason I had an overdose of PF stuff. I didn’t want to write boring posts about saving money on groceries, so I decided to rather not write anything, and then like the gym, once you drop it, it gets harder to go back on the horse. Anyway, I will leave that for 2015. In the meanwhile, here is a little recap of what happened lately.

During that past month, I decided to start the works on my new house. After my breakup a few months ago, I stayed in our little house by the beach, which I still operate as a guest house, but only own 50% of. My ex lives 300 miles away so I am not worried he will randomly show up, but I wanted to live in a place that was 100% my own. Buying him out was not an option, and if the guest house remains open, I like the idea of living completely apart from it, so both the guests and I can be independent.

My new house is right in front of the 90 acres land development, on a bigger 2 acres lakefront plot we bought in the spring to give residents access to the beach.

If you look at the image above, I have circled my future house. To the North is our 90 acres development, and to the East the streets of my village. On that 2 acres plot, there is a road that goes down to the lake so you can drive your car down, launch your boat or jetski, have a picnic on the beach… and there is space for 6-8 houses. I hope my house can be a model house so if people don’t want to build I can offer them a similar construction on another plot. Those houses will share the beach with residents from the development, but there is 100 meters of beach which is more than enough for everyone. My house is the first when you come in, it is the highest part of the plot so there are nice lake views and more privacy.

In order to help me with the building process, a friend of mine flew over and was to be my contractor and supervisor for three months. I was exhausted after having builders in my house nonstop for the past two years, and didn’t want to deal with any of it, so I was happy to offer him a cut to do all the work for me. But he had an emergency and had to go back to Europe within a week of the works being started. I thought about stopping everything and just wait for him to come back, but eventually decided to take over, so for the past month I have been deep in construction mode all by myself, which has been both empowering and nerve-wracking.

Since my house is about a mile away, I walk there 3-4 times a day, make sure everything is going smoothly, draw plans, go to town to buy materials, and so on. Thankfully my friend is still helping a lot from the distance with technical stuff such as plumbing and the electric system, but having to go back to managing 15 guys whose face just dropped when they heard my friend was gone and they’d have to deal with “the lady” again wasn’t the easiest.

Still, I decided to put my best effort into it, and am pleasantly surprised at the pace of things. In a month, we have almost finished the first floor. This has been my office for the past month 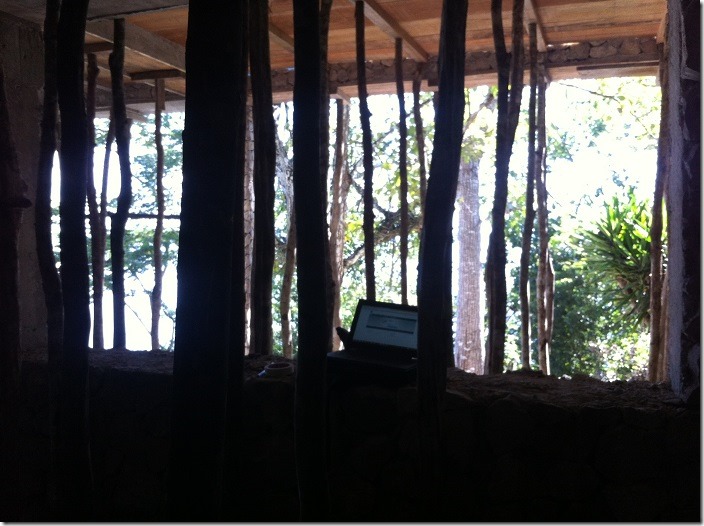 just trying to use the computer in what will one day be my living room!

The house is similar to the previous buildings, but will have two stories, kitchen-dining-living room on the first floor, and two rooms upstairs, each with a big bathroom, the master also has a walk-in closet. 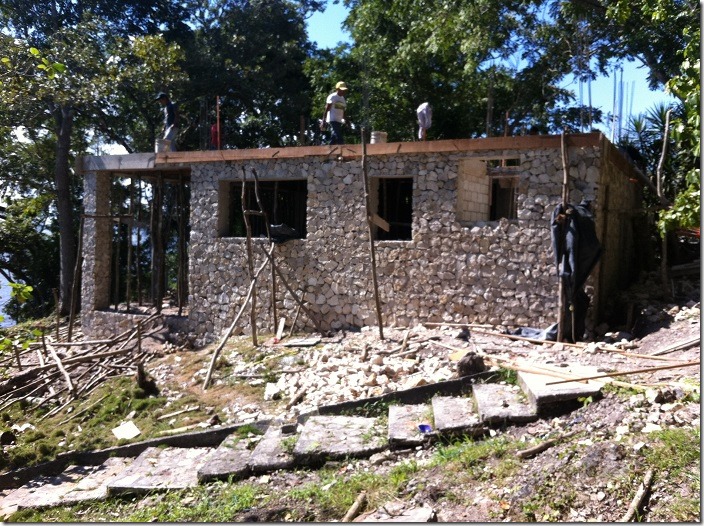 and that is the view from my future room!

In the end, I am pretty proud I did all that in a month, but it has been a lot to take in.

So to treat myself, I am going back to Europe on a whim! I just bought tickets to come back in January, I am visiting my friend in Madrid for a couple of weeks then heading to Paris to visit family, and having a girls meetup in the South of France as well as seeing my grandparents about 5 hours from Paris. I haven’t been back since September 2013 and was not missing it to be honest. I haven’t even left Guatemala since Miami a year ago and was happy with that too, when I used to feel the urge to go abroad 2-3 times a year. I usually like to go in May or September for the fair weather and people are in better moods, but I found a $250 ticket from Cancún to Madrid and it was just too good to pass.

Which means preparing for the trip has taken another good chunk of my days. We will leave the house drying before adding a second floor, but in my absence the guys will still do small things like kitchen countertops and storage, closets… which I have to draw precisely so I come back to a pleasant surprise.

I also have Airbnb guests for 10 days around the new year so I am in the process of training the maid and handyman to attend guests without me, which is no small task, they are humble village people and pretty scared of gringos. I trust it will be ok, but it takes time to have them pay attention to details and clean to an acceptable level every single day.

Napoleon the little Great Dane will also stay in the house while I am away, which is ok with the guests, so I had to buy him 150lb of meat since he is on a raw diet, and left them in a deep freezer… which broke yesterday. Yay for unexpected trouble!

He also has found an ugly little village dog who seems to have become his girlfriend, and since she is stealing his meat three times a day, now she sleeps here not to miss a thing! I took her to the vet for a parasite shot and washed her in the lake as she was so smelly, so now she seems to think we are her new home. I am kind of happy about it since Great Danes have separation anxiety so he’ll have a friend while I am away.

As soon as she started spending too much time around here, I found myself googling “mating great dane with chihuaha” as she is pretty small and I was worried about her dying from having to carry giant babies, but I found her parents in the village and they assured me she couldn’t have kids, so one less worry. 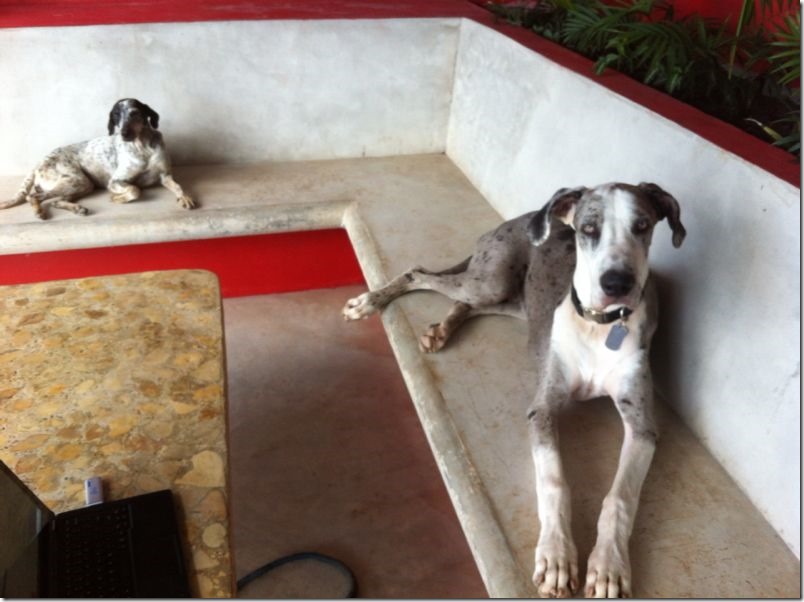 I don’t know if every mother thinks their daughter in law is never good enough for their son but I know I did. Then she was always there and in a good mood even when I bathed her and took her to get a shot so she kind of grew on me. Plus she is so eager to eat meat she does a really neat trick that if you throw food at her she’ll catch it in the air, like when you do that with peanuts and a drunk friend, except she never misses.

Oh, did I mention my TWO CARS broke down? The old Suzuki had a burst gas filter and was dropping gas as I drove, which scared the crap out of me once a guy pointed it out, I didn’t even dare drive it back to the mechanic, and the newer Hyundai had a burst radiator that blew off steam a few weeks ago, I changed it, drove for a day, broke the car again as a gasket got damaged by the radiator blowing, so I have been on foot for a while, which is super convenient when you need to buy construction materials every other day…

Meanwhile, some are taking it easy! 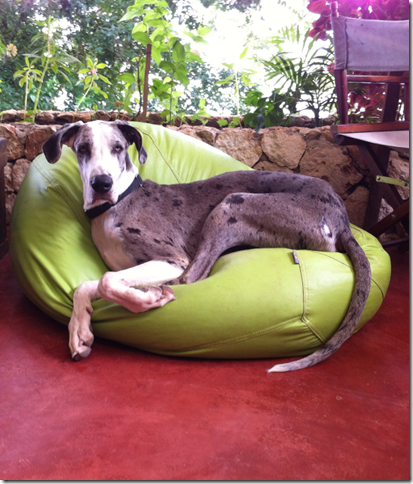 That’s it for now, thanks for bearing with me, and if we don’t talk by then, I wish you all very happy and lovely holidays, and I will see you in 2015!

Unsurprisingly, there are plenty of people out there jostling to help you spend your nest egg. All promise high returns, but not all that many deliver; in fact, you can quickly lose your super if ... END_OF_DOCUMENT_TOKEN_TO_BE_REPLACED

If you have recently taken up a position at a brand-new company and opened a 401k for the first time, you may be on the hunt for additional information when it comes to the various ways in which tax ... END_OF_DOCUMENT_TOKEN_TO_BE_REPLACED

Congratulations! You’ve worked hard this year. You made it through some tough days (or weeks or months). And now, if you’re lucky, you might end up with a holiday bonus. But before pocketing that ... END_OF_DOCUMENT_TOKEN_TO_BE_REPLACED

The United States of America is a destination most working professionals and travellers have on their list. Being one of the most visited countries in the world, it houses many tourist attractions, ... END_OF_DOCUMENT_TOKEN_TO_BE_REPLACED

When you were a kid, did you ever save quarters in a jar? Or set aside a portion of your allowance in a piggy bank for a big purchase, like a bicycle, a pair of designer shoes, or anything that mom ... END_OF_DOCUMENT_TOKEN_TO_BE_REPLACED

No matter where you are in your career, the potential of eventually retiring can be a daunting experience to think about. Are you saving enough for the future? If you are, when will you have enough ... END_OF_DOCUMENT_TOKEN_TO_BE_REPLACED