Financial Samurai had an interesting post recently asking if rich and powerful people are trying to keep the middle class down. I went through the comments and was really surprised to find that the vast majority said “of course not!” and there were some shy “maybes”, mostly pointing the rich are trying to keep their circle closed. Of course they want to keep the poor down! I am surprised at the comments to be the first one to say it clearly. Maybe because in Guatemala, it is way more obvious. 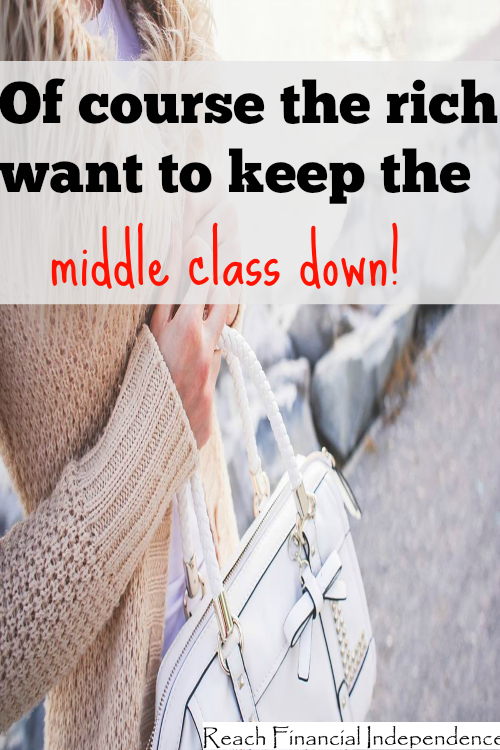 If there was a decent minimum wage, and work ethics, how would you afford a full time staff or five? How would you build a mansion if the labor was expensive? And most importantly, how would your company give you the benefits that sustain your lifestyle if your workers earned twice as much?

No only it is less money in your pocket, but you also give the worker freedom to work less since they make more. Meaning they won’t want to work for you much longer, and your whole company and leisurely lifestyle may be in jeopardy. If you read my post about the lifestyle of the rich in Guatemala, you’ll know they live much, much better than the average U.S. millionaire. And it all boils down to one little detail: cheap labor. A normal, upper middle class family can afford a maid, a nanny for the kids, a driver, a handyman, and bodyguards if needed. The wife can have daily salon pampering and the husband’s car will be washed every morning. All that staff will take care of your every needs for under $1,500 a month. Of course you never want the maid to get rich!

I had a well paid job. It didn’t take me long to do the Financial Independence math and start saving so I could quit my job at 29. Since then, I have made more money but I have not produced anything tangible that benefited the economy. I have enjoyed passive income from rentals or the stock market, and typed whatever came out of my head on that computer. If everyone was like me, we would all be starving. Poor people are the backbone of the economy.

Another obvious example in Guatemala are the coffee farms’ private shops. Before, as a coffee farm worker, you got paid in tokens every week. Your tokens were valid for food and sundries at the farm’s shop… owned by your boss. Most of the money he paid you ended back in his pocket. Sometimes you would even be charged for the bed he provided for you on site. You could exchange your tokens for real money but there would be little left after you ate that week. It was pretty close to slavery, but when you look closely, the average low class worker is not much better off.

Poor people play the lottery, they gamble, they drink alcohol, smoke cigarettes, all those things that are so easy to access help keep them docile and in desperate need of a job. Poor people are offered easy credit and shiny objects are places right in front of them on giant billboards so they want it so bad they don’t realize the “small, convenient, monthly instalment” will last for the next eight years, giving them no choice but to stay put at that job they hate. They consume the products they make and the rich profit from it. And then, there is a family to maintain, kids who want iStuff and cool clothes (a reader wondered why a one income family in the 1950s was able to make it just fine when a two income family struggles those days, that’s why: we want too much crap we can’t afford).

Sam says he doesn’t understand why there is a child tax credit under a certain level of income. In my opinion, having children is encouraged in hopes you will produce a nice little worker that will pay taxes, fund your pension and produce the goods you want to consume. It is worth the $1,000 tax credit tenfold.

Those kids will probably get in debt for a less than ideal degree, credit card debt, take consumer loans, you name it. The interest on those loans also make it worth the $1,000 initial cash advance.

The rich need middle class workers. People who are ready to do any job at any salary level.

As per the need of constantly having to find reassurance from within that we have indeed more than the neighbors, Guatemala’s high society hosts regular pissing contests to see who has the biggest yacht, the more sqft in their houses, or the most decadent wedding. But there is also a hard working, discreet set of millionaires that pulls the ropes in the background and you never hear about. They buy thousands of acres of public land and build popular housing with government incentives and tax breaks, or get dibs on public offerings, making more than you can imagine. And they are just as reluctant as the flashy rich guys about welcoming a new kid to the club.

So that is why I think the rich don’t want the low and middle class to get any better. Not because they don’t want them to be rich, because they need an affordable and docile workforce to do the work for them. They may allow the occasional crazy FI aspirant but they don’t want to spread the word that it is possible to get ahead, or they would have to go back to work too.

What do you think?

This post was featured on Quit Your Day Job, thanks!

Planning for a secure financial future is a wise decision that you should make for your family. You need to be committed to building wealth and take charge of your money. By investing in the right ... END_OF_DOCUMENT_TOKEN_TO_BE_REPLACED

Cryptocurrency has become a popular investment option in recent years, as more people want to make profits from its white-hot rise. However, cryptocurrency investment is a risky endeavor. It is highly ... END_OF_DOCUMENT_TOKEN_TO_BE_REPLACED

Unsurprisingly, there are plenty of people out there jostling to help you spend your nest egg. All promise high returns, but not all that many deliver; in fact, you can quickly lose your super if ... END_OF_DOCUMENT_TOKEN_TO_BE_REPLACED

If you have recently taken up a position at a brand-new company and opened a 401k for the first time, you may be on the hunt for additional information when it comes to the various ways in which tax ... END_OF_DOCUMENT_TOKEN_TO_BE_REPLACED

Congratulations! You’ve worked hard this year. You made it through some tough days (or weeks or months). And now, if you’re lucky, you might end up with a holiday bonus. But before pocketing that ... END_OF_DOCUMENT_TOKEN_TO_BE_REPLACED

The United States of America is a destination most working professionals and travellers have on their list. Being one of the most visited countries in the world, it houses many tourist attractions, ... END_OF_DOCUMENT_TOKEN_TO_BE_REPLACED