I have discovered Twitter in July, when I launched this blog. I was a bit dazzled at first and didn’t understand many things, like how to get my tweets noticed when everything was going so fast and there were so many people out there.

What I grabbed first, was that if I wanted people to read my tweets, I needed them to follow me. And that I should be returning the favor, or even better, following them first, in hope that they would follow back. After a week of adding people that were relevant in the field of personal finance, and nomadic lifestyle, I realized two things:

My approach was then to follow people who tweeted about personal finance, and among my followers, always follow back people who were PF bloggers or readers, from what their description said. I didn’t look at the exact numbers, but I estimate that around 20% followed me back. 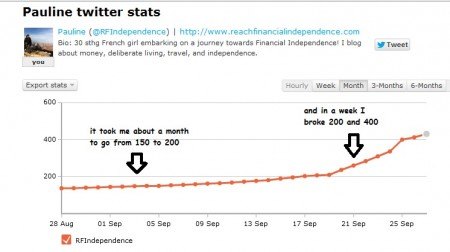 I also started using Qwitter, an application that will tell you every week who stopped following you. I am quite happy to report that people who are leaving are mainly fake profiles offering adult services. But a few PF people would drop out. Why was that? Could they be looking for a follow back, and then unfollow me because I wouldn’t follow them?

To prove my point, I followed back five of my unfollowers. Four didn’t re-follow me, and one did. I will call her X. I started thinking ”if X has 500 followers, those people must all be following back, because if they don’t, X would unfollow them like she did with me. It would be fun to see how many would follow me too if I added them”. I had a quick look at her followers’ descriptions and many were interested in personal finance, so I would at least have followers in my niche. Some even had a #followback on their description.

I had just started using Tweepi at the time, and one of the features of Tweepi is that you can see who follows X and start following X’s 500 followers. By the end of the week, I had twice more followers, from 179 to 410. The growth rate was incredible.

So why wouldn’t I keep doing that?

Simply because I am trying to grow a community. And by having followers who are just here because I follow them back, and will never say hi, or comment on anything, I am not going to grow my website. The funny thing is many people seem to be adding me since, looking for the same benefits! I am proud to have built my following group from scratch, my mum, my friends and my acquaintances were not invited, and none of them are following me. And of course I would like to have one zillion followers tomorrow, but I would rather have 100 active people reading, commenting and enjoying my blog.

Have you used other methods to grow your audience?

Planning for a secure financial future is a wise decision that you should make for your family. You need to be committed to building wealth and take charge of your money. By investing in the right ... END_OF_DOCUMENT_TOKEN_TO_BE_REPLACED

Cryptocurrency has become a popular investment option in recent years, as more people want to make profits from its white-hot rise. However, cryptocurrency investment is a risky endeavor. It is highly ... END_OF_DOCUMENT_TOKEN_TO_BE_REPLACED

Unsurprisingly, there are plenty of people out there jostling to help you spend your nest egg. All promise high returns, but not all that many deliver; in fact, you can quickly lose your super if ... END_OF_DOCUMENT_TOKEN_TO_BE_REPLACED

If you have recently taken up a position at a brand-new company and opened a 401k for the first time, you may be on the hunt for additional information when it comes to the various ways in which tax ... END_OF_DOCUMENT_TOKEN_TO_BE_REPLACED

Congratulations! You’ve worked hard this year. You made it through some tough days (or weeks or months). And now, if you’re lucky, you might end up with a holiday bonus. But before pocketing that ... END_OF_DOCUMENT_TOKEN_TO_BE_REPLACED

The United States of America is a destination most working professionals and travellers have on their list. Being one of the most visited countries in the world, it houses many tourist attractions, ... END_OF_DOCUMENT_TOKEN_TO_BE_REPLACED