It has been a tense week last week, mainly because of the sale of my studio flat in the suburbs of Paris. I had found a buyer back in June, and the legal contract took months (his lawyer’s fault) to write, so we eventually signed a sale at the beginning of August. You can think that between mid June when he made the offer and we started writing contracts, and August when we signed, we would have cleared everything there was to clear about the sale. WRONG.

His lawyer asked me for a lot of paperwork, which is standard, but when after two months, I was already on edge because the process was so slow and costing me time and money , he started asking about info he already had, I lost my cool. He thought he would have me do the job he was getting paid for, knowing that I was traveling, had little internet access and even less access to the paperwork.

I replied very dryly to him, saying that his client was perfectly right to ask dumb questions, but it was his job, not mine to figure out the answers. I still wrote to the buyer with the answers, not to compromise my sell, but seeing his lawyer hesitating, he got cold feet, and I lost my sale. It is legal here once you sign the agreement to have a 7 days cooling-off period.

So there I was, three months of condo fees,  and taxes later, with no prospective buyer, and my empty flat, still on my motorcycle trip abroad.

I had plans to come back to Paris ten days later, so it was not such a big deal, I was able to put the ad a few days before, and thought about the pricing. Last time, I had put the ad around $60K and sold for $56K. I didn’t want to have to negotiate and lose time, so I put ”non negotiable $58K”. Just because some people still think they can negotiate. I wanted to get at least the $56K but was lucky that six people wanted to visit the next weekend and the first girl who saw it accepted the $58K! She even had me sign a paper on the spot confirming that I would sell to her and the selling price.

We were supposed to sign a formal agreement with lawyers that same week. We went both with the same lawyer to ease up the process. WRONG again. The lawyers told her that she would probably have to pay $5000 in condo fees that hadn’t been approved for the past years, and she freaked out. Me too, as I had not idea, so I spent a whole evening checking the condo’s accounting reports, found no such thing and called her back. She was right to say that she had troubles believing me against the lawyer. I managed for her to come to the lawyer’s office where after three hours of me exposing all the accounts, the lawyer recognized he was wrong and there would be no such fee. But lazy lawyers hadn’t drawn the paperwork, so we lost another 10 days (i.e. $150 for me) in the process. I was also scared that she would keep looking and find something cheaper/better/any other excuse not to sign. 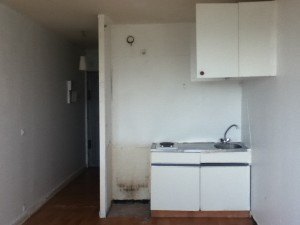 After what seemed like an eternity, we went back to the lawyer’s office last week and signed the agreement! She still had 8 days to cool off and could back up at any time, but those 8 days are now expired!! The only very unlikely reason why she may not go through is not getting her loan but she is a government worker so not too worried on that front. Since I had plans to buy some land in Guatemala, I was very anxious that the sale comes through, not only to get the much needed money to buy something else, but also because my flat had been empty since March and I didn’t want to bleed any more money in fees and taxes than I have for the past six months.

I am so grateful because all things considered six months is not so long to sell a flat. I had it advertised with agents for months but they did nothing apart from asking me to lower my price 30% to get an easy sale and they would lower their commission $100… again I had a hard time staying polite with those.

No I can move on and get busy with my Guatemalan land! My offer has been accepted so I am officially a landowner!

Let’s have a look at the numbers

If the sale falls through even more, but let’s cross fingers and looks at the grand total : $30700

Or about 17% per year, non compounded as I was spending the rent money as it went. What I will really have in my pocket is $56000 after $30700 invested 9 years ago, so that’s more like 5.5% compounded, still a pretty healthy return.

Pretty good, uh!! I am very grateful that I was able to buy that studio flat right out of college, though I was trying to borrow at the time and buy bigger, and I would probably have made a bigger profit, yet the bank didn’t let me borrow.

At the time I could have kept the money on my bank account and tried to buy later, but as I was abroad that would have been more complicated. And the return was much better on the flat. Yet those last months it was a real pain to deal with the managing agency and trying to sell, so I’m really happy I found a buyer and hopefully in two months, I’ll receive that big check, and use it for home building on my new land.

Planning for a secure financial future is a wise decision that you should make for your family. You need to be committed to building wealth and take charge of your money. By investing in the right ... END_OF_DOCUMENT_TOKEN_TO_BE_REPLACED

Cryptocurrency has become a popular investment option in recent years, as more people want to make profits from its white-hot rise. However, cryptocurrency investment is a risky endeavor. It is highly ... END_OF_DOCUMENT_TOKEN_TO_BE_REPLACED

Unsurprisingly, there are plenty of people out there jostling to help you spend your nest egg. All promise high returns, but not all that many deliver; in fact, you can quickly lose your super if ... END_OF_DOCUMENT_TOKEN_TO_BE_REPLACED

If you have recently taken up a position at a brand-new company and opened a 401k for the first time, you may be on the hunt for additional information when it comes to the various ways in which tax ... END_OF_DOCUMENT_TOKEN_TO_BE_REPLACED

Congratulations! You’ve worked hard this year. You made it through some tough days (or weeks or months). And now, if you’re lucky, you might end up with a holiday bonus. But before pocketing that ... END_OF_DOCUMENT_TOKEN_TO_BE_REPLACED

The United States of America is a destination most working professionals and travellers have on their list. Being one of the most visited countries in the world, it houses many tourist attractions, ... END_OF_DOCUMENT_TOKEN_TO_BE_REPLACED