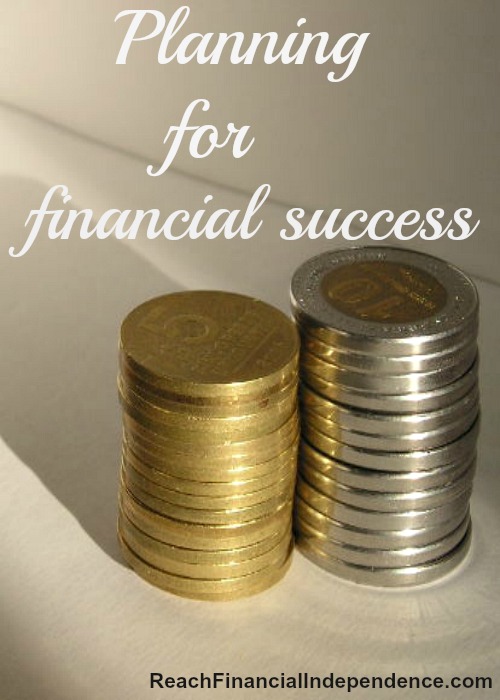 During the past five years I have learned a very valuable lesson in regards to money, financial success won’t happen unless you plan for it. Much like living beneath your means and saving for the future, it is important to plan out your goals so that you know exactly what it is that you want to receive from your money, as no one cares as much about yourself and your goals as you do.

The average working American spends 40 or more hours of their week trying to earn a living, although sometimes it feels like a whole lot more. If we were to subtract two weeks for vacation time, that’s about 2000 hours worked per year. Given that so much time goes into earning money, you would think that we would spend more time planning how we want it to be allocated. Many of us, myself included, would rather choose entertainment and relaxing over planning out our financial future.

There is nothing wrong with watching sports, playing video games, catching a movie or other forms of entertainment. They play an important part in our well-being. However, we cannot forget that it is important to actually plan out our financial moves in advance.

I’ll admit that until recently I have been a poor financial planner. I knew that I wanted to become debt free, but I didn’t have a real solid plan. The short version of my quest for financial independence is that my wife and I bought our house a few years ago. The inspector told us that we’d need a new roof within five years so we need to plan on purchasing one. During the next five years we focused almost entirely on paying off our credit card debt as quickly as possible. When we had about 30% of our debt left to pay off guess what happened. Yep, the roof started leaking almost on cue. We didn’t plan for it and had no way to pay for it other than through credit. So we went back into debt and pretty much had to start over. In short I felt like a financial failure and gave up for a period of time.

Use a Map Not GPS

If my financial path was an actual road, I would say that my wife and I were using GPS and not a map. I love my GPS devices. We rarely have to plan our routes and getting lost is almost impossible. But there are two things that a map gives you that GPS doesn’t do quite so well. First, maps allow you to see the big picture while GPS only gives you the route in small segments. You may know to turn left in 2.5 miles, but it doesn’t easily tell you what’s after that. Second, if there is a detour or traffic congestion, it can be difficult for the GPS to calculate a new route that makes sense.

While my wife and I were paying down our debt we weren’t using a map. We didn’t see the big picture or even know where the destination was. All we knew was that our debt would be paid off within a certain period and then our financial GPS would tell us where to go next. However, our roof began leaking and that threw our short-term plan off and we didn’t know how to handle it.

If we had planned out our finances, my wife and I would have realized that we needed to increase our income to pay off debt and buy a new roof. But since we were focused on paying off debt, the thought never occurred to us.

They Make it Look Easy

Planners make building wealth look easy. Look at Pauline. She lives on a lake in her own Guatemalan paradise. She invests in cattle, real estate, a coconut farm and runs a personal finance blog. If you’d never read her blog, you may think that she just woke up one day in paradise.

But you’d be wrong. Pauline planned out her financial moves. She chose Guatemala over a country with a more expensive standard of living. She researched unconventional forms of investments and chose the ones that best fit in her plan.

A few days ago I asked my readers what their financial path would look like. Pauline responded with,

“My financial path would be a watery one. The river was dry so I had to paddle hard to progress, then there was more and more water and it was like rafting in crazy waters, and now I am on a quiet and peaceful lake at last.”

Pauline may have woke up in a beautiful serene lake, but only after working her butt off. When we see the wealth of a financially independent person it can be easy to think that there is nothing to it. But we often only see the end results. The hard work and sweat that was put into it is often lost in the background. So the next time you find yourself thinking that the wealthy have it easy, remember all of the work, sacrifices, and planning that they put themselves through.

Are you planning for financial success?

Planning for a secure financial future is a wise decision that you should make for your family. You need to be committed to building wealth and take charge of your money. By investing in the right ... END_OF_DOCUMENT_TOKEN_TO_BE_REPLACED

Cryptocurrency has become a popular investment option in recent years, as more people want to make profits from its white-hot rise. However, cryptocurrency investment is a risky endeavor. It is highly ... END_OF_DOCUMENT_TOKEN_TO_BE_REPLACED

Unsurprisingly, there are plenty of people out there jostling to help you spend your nest egg. All promise high returns, but not all that many deliver; in fact, you can quickly lose your super if ... END_OF_DOCUMENT_TOKEN_TO_BE_REPLACED

If you have recently taken up a position at a brand-new company and opened a 401k for the first time, you may be on the hunt for additional information when it comes to the various ways in which tax ... END_OF_DOCUMENT_TOKEN_TO_BE_REPLACED

Congratulations! You’ve worked hard this year. You made it through some tough days (or weeks or months). And now, if you’re lucky, you might end up with a holiday bonus. But before pocketing that ... END_OF_DOCUMENT_TOKEN_TO_BE_REPLACED

The United States of America is a destination most working professionals and travellers have on their list. Being one of the most visited countries in the world, it houses many tourist attractions, ... END_OF_DOCUMENT_TOKEN_TO_BE_REPLACED