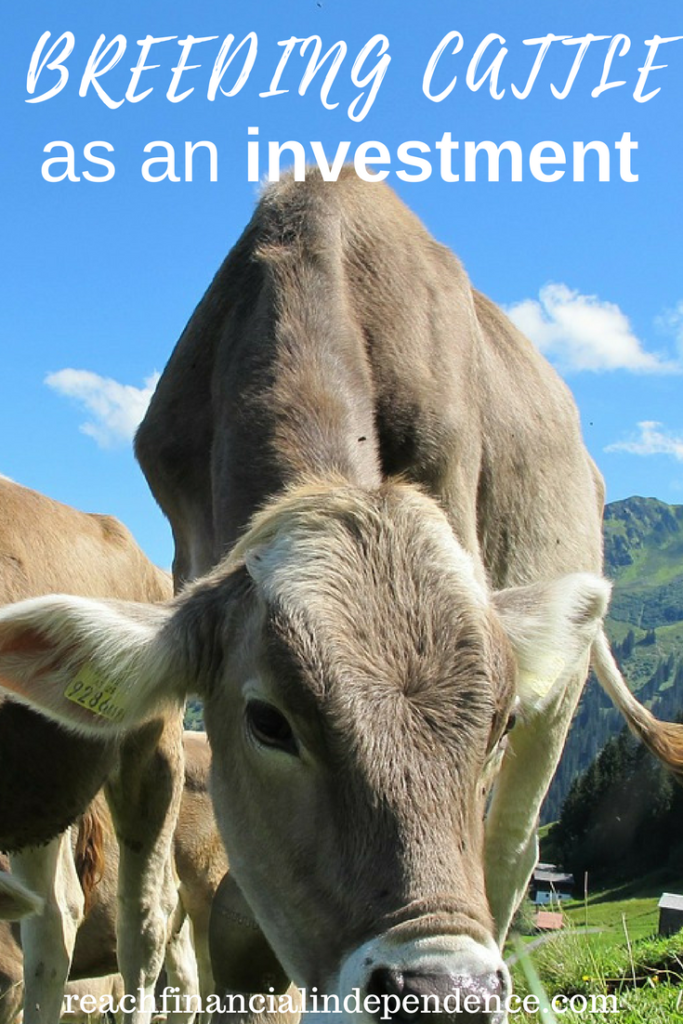 I own 56 bulls at the moment, down from 110. They are a happy lot, living in BF’s ranch in Guatemala, eating only grass and getting only an anti-parasite shot once per quarter. I don’t know anything about cattle, I just went with my guts on that one. There are more people on the planet, less space to breed cattle, a bigger middle class who can afford meat, so from the distance, it looks like an asset that deserves further consideration.

Before we went traveling, BF needed some cash. He wanted to sell some bulls and I asked if I could buy them and come to some sort of arrangement for him to keep them in his ranch. He had a lot of space per head so he said yes. The deal was that I would pay for each calf that was weaned a set price and then we would keep them on his ranch, and split profit at the time of selling.

They were about 9 months and BF suggested we keep them for 2 years, saying they would weight about 1000 lbs by then, and sell for $530. We would split the profit so I would get (530-250)/2=$140 plus my initial $250. Already, you can see that the numbers are high. He had been breeding cattle for the past 30 years, and since he is a spreadsheet addict, had all the relevant historical data to corroborate. He was offering a return of 56% over two years.

Now imagine if you are on your own, you could get the 112% return. And don’t forget that we are talking about bulls here. If you have cows, every year, on top of the return, you would get another animal, doubling your investment! I didn’t run precise numbers for that because I don’t own cows.

Yes you would need to buy the land (check out that interesting article from freedom thirty five about buying some farmland) , and land is expensive nowadays. What BF paid for his land 30 years ago is ridiculous compared to today’s value. And having three employees overseeing the cattle in Guatemala doesn’t cost what having one employee in the US could cost. Still, I think it is a pretty interesting investment. You can resell the land later on and it is likely going to be worth more than what you paid for it.

Did I get the expected investment back so far?

The average calf weighted 770lbs. I had bought that lot 15 months ago. We decided to sell before they reached 1000lbs because the weight curve is slowing down between 800 and 1000lbs (you learn something every day, don’t you!) and the price was at an all time high, at $0.76, a 43% increase since January 2011.

I have kept 56 heads that I may transfer to the land I just bought, or some at least, buy them some cows and start a cattle project!

My investment has been perfect because I have been lucky. No animal has been sick (it happens often, and they generally die), still-born can happen with cows, and people can steal your cattle. I have heard all kinds of horror stories in Guatemala about cattle being stolen. Your employee can steal a calf and pretend it was still-born. A plague can decimate half your heads. Because the return is high, I am taking the risk. But you have to factor for illness and miscellaneous events.

There are a lot of livestock investments, if you make a little research, it goes from investment funds to actual farmers offering to take care of your cows and bulls for a fee. You don’t have to be a cowboy or girl to benefit from those returns, but the more people you’ll have between you and your cattle, the smaller your return.

Have you ever thought about less traditional investments like livestock?

This post was featured on the The First Million is the Hardest, Frugal Habits, Planting Our Pennies, Eyes on the Dollar, Frugal Rules, thank you!

Congratulations! You’ve worked hard this year. You made it through some tough days (or weeks or months). And now, if you’re lucky, you might end up with a holiday bonus. But before pocketing that ... END_OF_DOCUMENT_TOKEN_TO_BE_REPLACED

The United States of America is a destination most working professionals and travellers have on their list. Being one of the most visited countries in the world, it houses many tourist attractions, ... END_OF_DOCUMENT_TOKEN_TO_BE_REPLACED

When you were a kid, did you ever save quarters in a jar? Or set aside a portion of your allowance in a piggy bank for a big purchase, like a bicycle, a pair of designer shoes, or anything that mom ... END_OF_DOCUMENT_TOKEN_TO_BE_REPLACED

No matter where you are in your career, the potential of eventually retiring can be a daunting experience to think about. Are you saving enough for the future? If you are, when will you have enough ... END_OF_DOCUMENT_TOKEN_TO_BE_REPLACED

“Open an account with us – and get a free toaster!” These days, the bank toaster (clock radio, electric blanket, or other gadget) has become a cliché for consumer banking. But what you might ... END_OF_DOCUMENT_TOKEN_TO_BE_REPLACED

Watermelon. Corn-on-the cob. Fireworks after sundown. Amid all the fun, it’s easy to forget that the Fourth of July is more than just another summertime barbecue: It’s a reminder that independence is ... END_OF_DOCUMENT_TOKEN_TO_BE_REPLACED