Since I started Make Money Your Way last July, I took a pledge to give 10% of my blogging income to support children education in my village. As you may have read in a previous update about the project, I gave two scholarships to the best two students of middle school so they can go to high school 150 miles away for the next three years. 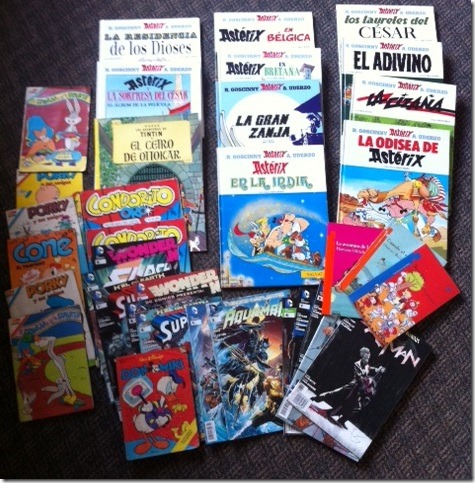 Here is the money I have

Thank you to each and every reader as well for helping me improve my stats and hence affiliate sales, Adsense revenue and blogging income in general. You rock!

So far, I have spent $4,066 explained in the last update, between supplies and uniforms for the new school year (January), boarding school tuition and buying a couple of laptops for my computer literacy project. I have $3,596 left.

I paid for April’s tuition at $478 a bit late as on April 1st the school still hadn’t provided me the receipts for March, which I paid at the end of February, and the field trip for the accounting students to Guatemala City, to visit the central bank and other institutions. I was annoyed honestly, mostly bothered because I hate not paying for something in due time but I knew that if I paid I would never see the receipts.

The kids have a sort of parents meeting where they get their grades for the first quarter of the year next week and invited me to go over, but it is a three hour drive, on a Thursday meaning I can’t even give them a ride back to the village for the weekend, and think the $50 worth of gas would do more good invested in the project. I still plan on visiting the school soon though, as it is on my way to Guatemala City where I will go soon. I did give $45 to the kid who didn’t go on her one day field trip as I offer her the money to pay for three trips back home instead of just spending a very expensive day at the beach and she made me proud by choosing to go back home instead.

Unless they grow up quickly and need new uniforms, I think they are all set with just tuition costs for the months to come. Well, I thought. I just had to give $32 to buy more arts and crafts supplies and $24 for bus rides to go to summer practice for the next six weeks.

Total with tuition and board from April to June: $1,535

At the moment, I have four laptops in use in the village. I didn’t want to give them to the school because they used to have computers, the computers broke, and now no one is fixing them. And I don’t want to have a teacher tell me what I can and can’t do, I want the kids to have fun learning, and if browsing the web for songs or chatting with their family who immigrated to the US is what will teach them how to type and browse, that’s fine by me.

Can you believe that the teachers actually give the middle school kids assignments to browse Google for things and do presentations when they don’t even know how to do a Google search? Teachers come from a nearby town and seem to have little grasp of reality sometimes.

So instead I gave the laptops to the girl who cleans my house, to set up a little internet café at her place, one block away from school. She is from Spain and comfortable around computers, so that is a big help. Our deal is that three half days a week, for four hours, she will teach any kid from school who wishes to come over how to use a computer, and since she has the computers at her place and pays for electricity, during the rest of the time, she is free to use them and rent them by the hour as an internet café.

She is well organized so she has divided the 12 hours a week into 12 groups and so far it has been a smashing hit, as 50 kids have enrolled! The word of mouth just took a few days and we started last week, with 4-6 kids per session. You wouldn’t imagine how the first session went, those kids had never been around a computer at age 10-14, and she had to teach them how to turn it on and off, then they played a little bit on Paint to learn how to use a mouse. They were all perfectly silent and in awe, like we were teaching them some kind of very powerful skill.

To ensure continuity, the kids each are assigned one hour per week, with the same teammates. Out of 50, I would say 40 or so are girls, which fits perfectly my goal to help girls first, as they get less opportunities overall to get an education. If the family doesn’t have money to send all kids to school, generally the males will go.

It was funny because they didn’t know what to expect when we started promoting the computer class, one hyperactive girl was sent to register by her mum who just was happy to have her out of the house for a change, and another one came in and asked if that was where the English class was held :). As a matter of fact, as I bought laptops in the US and was given some by readers, they do have the operating system in English so they’ll get to learn a little English as well!

The Spanish girl will keep teaching the kids three half days a week and I pay her salary at $25 per week. She shares a full time job with her boyfriend the handyman/gardener at my place, and while I need her more lately thanks to the Airbnb guests, she used to sell snacks on the side to construction workers but another lady took over so she can use the extra money. Plus her house is much closer to school than mine if I were to teach at my place, the kids would have to walk 15 minutes to get there. I hope she can make a little extra with the internet café as there is none in the village.

I also pay for internet connection, and expect April to come around $80 as I tried to buy a wifi router to share one wifi connection with all computers at once, but we don’t have a phone line and they were out of USB routers so I have to put a modem and pay for internet for each computer at the moment. Total budget for April $192. It went a bit lower in Mayas I bought the $100 wifi modem, and in June the kids were on break so allowed to download more data (they love music clips), which was more expensive.

Note: I have been offered by the gentlemen who will dig our well next month and live in Ohio that I could send laptops to their house and they would bring them over to Guatemala so if you have an old laptop that could use a nice retirement under the Guatemalan sun, please let me know, it would be fantastic to have more laptops and grow the project.

Around here, nobody reads. In Guatemala in general, it is hard to come across someone reading a book. I grew up reading book after book and believe it is a great way to learn, dream and grow. So I bought a few books for the kids. Nothing heavy. Comic books, fairy tales with big pictures and few words, to give them the taste to read. The girl that gives computer classes told me she often lent small books to 10-12 year olds and was appalled they read so slowly and didn’t catch half of the story. So I thought let’s start with something they would enjoy reading for the ease of it and the colorful pictures. Spiderman, Superman, Disney’s characters… As books are overpriced here ($20 and up for a children book!), so to give it a try I bought some used ones for $1-$5. I even found a children financial education book from the bank of Guatemala! Every week when they go to computer class, they leave with a book and bring it back the next week. It was a hit! Some had already read them all, so when a friend gave me $300 to buy more books, I got some nice new ones, mostly comics from Tintin and Astérix, who are so popular in France. They have a huge interest in learning English so I might try to find some basic English reading books next time.

I have $1,305 left. Once again, thank you for supporting my blogs and making this possible!

Planning for a secure financial future is a wise decision that you should make for your family. You need to be committed to building wealth and take charge of your money. By investing in the right ... END_OF_DOCUMENT_TOKEN_TO_BE_REPLACED

Cryptocurrency has become a popular investment option in recent years, as more people want to make profits from its white-hot rise. However, cryptocurrency investment is a risky endeavor. It is highly ... END_OF_DOCUMENT_TOKEN_TO_BE_REPLACED

Unsurprisingly, there are plenty of people out there jostling to help you spend your nest egg. All promise high returns, but not all that many deliver; in fact, you can quickly lose your super if ... END_OF_DOCUMENT_TOKEN_TO_BE_REPLACED

If you have recently taken up a position at a brand-new company and opened a 401k for the first time, you may be on the hunt for additional information when it comes to the various ways in which tax ... END_OF_DOCUMENT_TOKEN_TO_BE_REPLACED

Congratulations! You’ve worked hard this year. You made it through some tough days (or weeks or months). And now, if you’re lucky, you might end up with a holiday bonus. But before pocketing that ... END_OF_DOCUMENT_TOKEN_TO_BE_REPLACED

The United States of America is a destination most working professionals and travellers have on their list. Being one of the most visited countries in the world, it houses many tourist attractions, ... END_OF_DOCUMENT_TOKEN_TO_BE_REPLACED