Yes, I know it is December and I am late with so many posts, but real life has taken over, and will always be more important than online stuff, so please bear with me. I won’t merge October and November into one post as many things have happened in November so I don’t want to make some 3,000 word posts either!

Since I started Make Money Your Way mid 2013, I took a pledge to give 10% of my blogging income to support children education in my village. As you may have read in a previous update about the project, I gave two scholarships to the best two students of middle school so they can go to high school 150 miles away for the next three years, and I sponsor a small library and computer project in the village.

On July’s update, I mentioned that I received a great parcel from a New York teenager whose dad is a reader of this blog, and helped her put together a package to send to Guatemala with her old laptop a school supplies. I used the laptop for my village’s computer project, but since it was the middle of the school year when I got the supplies, I decided to donate them to an orphanage instead. The place is called Ahicam and is about two hours drive away, close to the boarding school my sponsored kids go to.

This place has been a safe heaven for abused kids and orphans for the past five years, and received no public funding, in spite of helping children placed here by a judge because their family environment is unsafe. As I talked to the secretary, she was trying to send an email with an attachment to some potential volunteer abroad, to show them what they do. She was having a hard time and mentioned they didn’t have a website to refer people to, so it was hard for her with her little computer knowledge to send emails with attachments. I taught her how to do it, we did it twice to make sure she understood, and I offered to help them with a website. 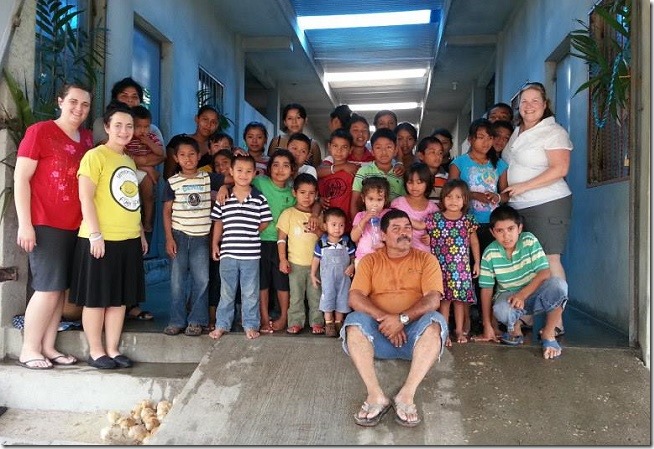 I registered ahicamguatemala.com as just Ahicam was taken, and you can spell Guatemala the same in English and Spanish so that should help when giving the URL by phone to people. I got them hosting and domain for three years, as well as a website design with Genesis. I hired most of the process out as I had little time to take care of it, and with the gas money to get there (over 200 miles) and teach them how to use it, it came to $265 all in. I could have gotten them a free domain and hosting and a free theme but I hope that site will help them look more professional when looking for volunteers and donations. We’re still working on it to make it look nicer, but they are posting updates about the kids regularly.

The computer project is chugging along nicely as usual, we have rotated the kids so new kids can enjoy the computers. One mother went to enrol her kid as she thought we were giving English lessons! Many have a (generally illegal) relative in the US and a genuine interest in learning English to communicate with the gringos that sometimes travel through the village. So the computer teacher started looking for learning programs to teach them colors and other basic words in English.

As for the reading project, I received a lovely email from Femme Frugality offering to pitch my book donation request to her librarian as they often run book drives, so fingers crossed we may get more books very soon! I can manage free shipping from Ohio so if you have some books in Spanish you’re not using, and would like to donate them just let me know!

The two students I sponsor to go to boarding school for high school two hours away are finishing their school year at the end of October. As usual, I paid their $478 tuition. We had great news from my Spanish neighbor who found another sponsor to send the best kid of middle school this year to boarding school next year! I went to the middle school’s graduation, and was really amazed to see the best three students to graduate were all girls. They have less opportunities than boys when the families only have money to send one kid to school, so it was great to see them graduating, and that a second girl will go to boarding school next year.

And the first boy to have ever gotten a scholarship just graduated in November after three years, which is exciting too! I will probably go to the graduation ceremony, then drive my two kids back to the village, as the school doesn’t let them keep their belongings in their room during the two months break, so they have to bring back everything, mattress included…

I found some cheap desktop computers that I want to buy next month, so am hoping for another great blogging month to cover it all!

Unsurprisingly, there are plenty of people out there jostling to help you spend your nest egg. All promise high returns, but not all that many deliver; in fact, you can quickly lose your super if ... END_OF_DOCUMENT_TOKEN_TO_BE_REPLACED

If you have recently taken up a position at a brand-new company and opened a 401k for the first time, you may be on the hunt for additional information when it comes to the various ways in which tax ... END_OF_DOCUMENT_TOKEN_TO_BE_REPLACED

Congratulations! You’ve worked hard this year. You made it through some tough days (or weeks or months). And now, if you’re lucky, you might end up with a holiday bonus. But before pocketing that ... END_OF_DOCUMENT_TOKEN_TO_BE_REPLACED

The United States of America is a destination most working professionals and travellers have on their list. Being one of the most visited countries in the world, it houses many tourist attractions, ... END_OF_DOCUMENT_TOKEN_TO_BE_REPLACED

When you were a kid, did you ever save quarters in a jar? Or set aside a portion of your allowance in a piggy bank for a big purchase, like a bicycle, a pair of designer shoes, or anything that mom ... END_OF_DOCUMENT_TOKEN_TO_BE_REPLACED

No matter where you are in your career, the potential of eventually retiring can be a daunting experience to think about. Are you saving enough for the future? If you are, when will you have enough ... END_OF_DOCUMENT_TOKEN_TO_BE_REPLACED