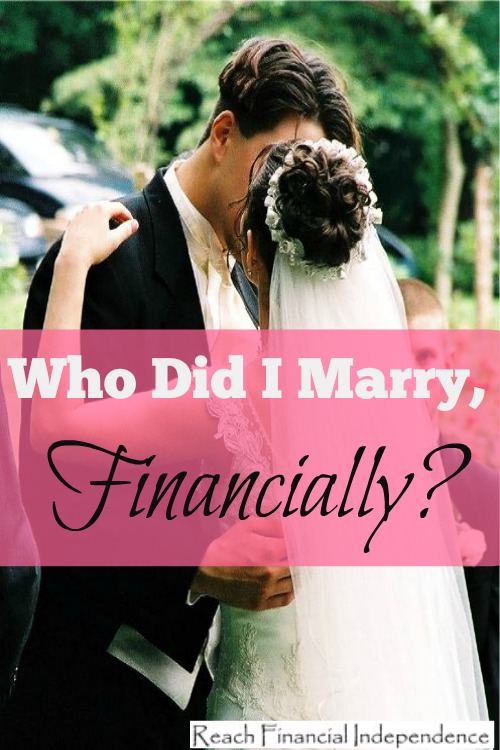 When I realized that my now-wife was “the one”, I also realized that I have no idea what was going on with her finances. It didn’t help that she didn’t want to tell me anything about her finances. So when I found out that she had almost USD $150,000 in debt, I had to re-think what that would mean for our future.

At that time, we were both in graduate school. While I wasn’t entirely debt-free either, it was a more manageable USD $15,000. I had begun planning all of the things I was going to do when I was finished with my studies; first of course was to pay off my debt. But then afterward: Buy a new car! Buy a house! Buy bottles of expensive Champagne! Buy an engagement ring!

You can imagine, then, when she finally dropped the debt bomb on me. I never wanted money to be a big deal in our relationship, but after the debt revelation money was going to play a much larger role. While I had my expectations of how we would handle finances together as a couple, they were instantly shattered.

Much of this was complicated by our past and our future. My upbringing was a modest one, with two immigrant parents working their way up from middle class. Her’s was a privileged one, coming from a well-off family that was in the middle of decline. My future income potential from my career is much higher than for her’s. From the beginning of our commitment, we would have to learn to try and see eye-to-eye on finances.

It has been difficult, to say the least, to find middle ground. My wife expected that her salary would be able to buy much more than was possible. I expected my salary to afford us the beginnings of financial security. She has had to come down a bit and realize that her amount of debt, combined with her relatively low salary, would only afford her the most basic of things. I also had to come down and realize that my salary was now our salary and that by being forever connected with this person, I am also forever connected with her debt.

Over the years we’ve come to realize that our individual expectations about money did not necessarily reflect our combined expectation. My wife now sees the value of having a modest emergency fund and saves a rather large amount of her paycheck into her retirement account. I now see the value of an occasional splurge and the long-term value of well-made, sometimes expensive goods.

This isn’t to say that our system is perfect; indeed it is far from it. We have more than the occasional argument stating that I am cheap or that she is reckless. After the yelling has stopped, we sit down and talk.  At the end of the day one or both of our egos have suffered minor bruises, but we always find a way to come together.

Were the finances between you and your partner at odds with each other? How did you come together to find common ground? Is it still a source of tension in your relationship?

This post was featured on the Mo Money Mo Houses, thank you!

Unsurprisingly, there are plenty of people out there jostling to help you spend your nest egg. All promise high returns, but not all that many deliver; in fact, you can quickly lose your super if ... END_OF_DOCUMENT_TOKEN_TO_BE_REPLACED

If you have recently taken up a position at a brand-new company and opened a 401k for the first time, you may be on the hunt for additional information when it comes to the various ways in which tax ... END_OF_DOCUMENT_TOKEN_TO_BE_REPLACED

Congratulations! You’ve worked hard this year. You made it through some tough days (or weeks or months). And now, if you’re lucky, you might end up with a holiday bonus. But before pocketing that ... END_OF_DOCUMENT_TOKEN_TO_BE_REPLACED

The United States of America is a destination most working professionals and travellers have on their list. Being one of the most visited countries in the world, it houses many tourist attractions, ... END_OF_DOCUMENT_TOKEN_TO_BE_REPLACED

When you were a kid, did you ever save quarters in a jar? Or set aside a portion of your allowance in a piggy bank for a big purchase, like a bicycle, a pair of designer shoes, or anything that mom ... END_OF_DOCUMENT_TOKEN_TO_BE_REPLACED

No matter where you are in your career, the potential of eventually retiring can be a daunting experience to think about. Are you saving enough for the future? If you are, when will you have enough ... END_OF_DOCUMENT_TOKEN_TO_BE_REPLACED