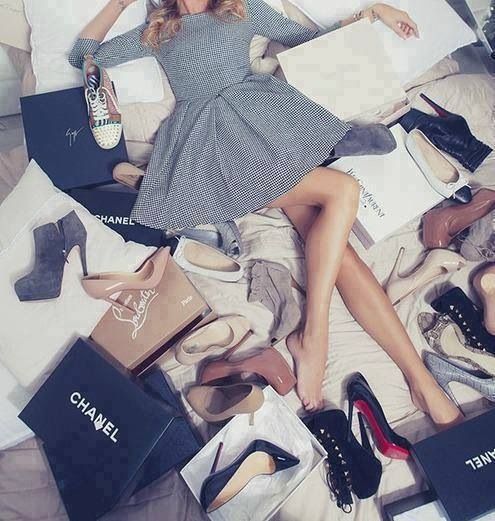 After a massive shopping spree in Miami last month, I have to say that I feel a bit overwhelmed. I don’t know how shopping addicts can spend every single weekend at the mall and rack up four digit credit card bills each time. We went to all the major malls in and around Miami. While I hadn’t been shopping for a long time and was looking forward to buying certain items, such as a pair of jeans, or some cotton underwear that I don’t find in Guatemala, the rest was more of a spur of the moment shop.

And what a shop it was, I don’t think I had ever spent £1500 on clothes and other household items in such a short amount of time. But I wanted to prove a point to BF, that I was able to go out and spend like crazy. One afternoon when we got home, I told him “you know, I may have all those new things, but my overall level of happiness hasn’t improved”. That was true. What made me happy during that Florida trip was the road trip to the Keys, walking around Miami Beach, the all you can eat seafood buffets and discovering a new city. Not the stuff.

Another day, I had a strange feeling, as I couldn’t remember all the items I had bought. I saw two pairs of jeans in my suitcase but was pretty convinced I had bought three. I had to look twice before finding the third pair. Otherwise I could have gone home with two pairs and not even notice. I generally use one pair of jeans until they tear, then buy another pair. Now I have four pairs and again, I don’t really see the point. The main pro I see is that I can spend another year without entering a mall, easily. So that’s good I guess. But where I live it is also pretty humid, and clothes get moldy. So the more you have, the more complicated it is, as you have to wash them often and do a turnover so things get used regularly, or they will rot in the closet, literally. I have ruined  a few t-shirts this way already.

Anyway, back to the shopping, something I loved was how easy it was to change your mind and return an item. I had to go back to Target once, as I had bought a duvet cover, and then found a better, cheaper one at Macy’s. I was working a little speech in my head while queuing, to explain the reason I wanted to return this item. I wasn’t aware of the fact that you technically can’t return an item, unless it comes broken or faulty, but not just because you changed your mind. You can read about it in this article, although it says that most shops will accept a return as a customer favor, but they have no obligation to do so. Wow, I wouldn’t want to live in a world where you can’t return stuff, as I often change my mind. The article also shows that shops have to honor the price on incorrect tags, which I think is pretty cool. Many times at the supermarket, an item scans wrong and generally I asked for it to be rectified, but it takes time, the manager has to come validate the price etc. so a few times I have given up, mostly because BF calls me cheap when I lose 10 minutes to get a $0.25 price difference back. But for me it is a question of principle and I think of the 1,000s of customers that will not say anything, while the store makes more money than it should.

Planning for a secure financial future is a wise decision that you should make for your family. You need to be committed to building wealth and take charge of your money. By investing in the right ... END_OF_DOCUMENT_TOKEN_TO_BE_REPLACED

Cryptocurrency has become a popular investment option in recent years, as more people want to make profits from its white-hot rise. However, cryptocurrency investment is a risky endeavor. It is highly ... END_OF_DOCUMENT_TOKEN_TO_BE_REPLACED

Unsurprisingly, there are plenty of people out there jostling to help you spend your nest egg. All promise high returns, but not all that many deliver; in fact, you can quickly lose your super if ... END_OF_DOCUMENT_TOKEN_TO_BE_REPLACED

If you have recently taken up a position at a brand-new company and opened a 401k for the first time, you may be on the hunt for additional information when it comes to the various ways in which tax ... END_OF_DOCUMENT_TOKEN_TO_BE_REPLACED

Congratulations! You’ve worked hard this year. You made it through some tough days (or weeks or months). And now, if you’re lucky, you might end up with a holiday bonus. But before pocketing that ... END_OF_DOCUMENT_TOKEN_TO_BE_REPLACED

The United States of America is a destination most working professionals and travellers have on their list. Being one of the most visited countries in the world, it houses many tourist attractions, ... END_OF_DOCUMENT_TOKEN_TO_BE_REPLACED