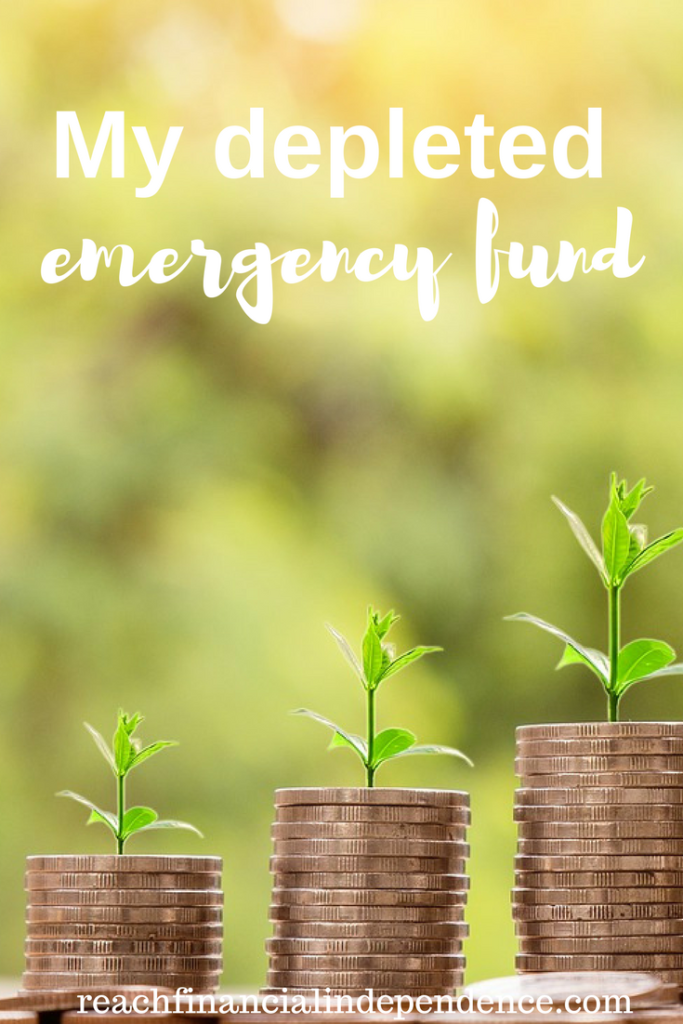 This month, I have a lot of expenses. Because my flat didn’t sell like I expected, I have to pay over $400 a month in condo fees and taxes. This has been the case since March, and I thought it would stop in September. September in France is also taxes time, and I have to pay about $1,000 as per last year’s income. I already paid a bit in May and February, but the amounts were lower.

When  the sale of myflat was still going strong, I was not worried about the taxes since I would by then have gotten my check for the flat and covered the tax bill with it.

Now I have to be creative to find the money, as I have been traveling for the past year and a half, and have never had much of an emergency fund to start with.

My French current account holds a grand total of $150, plus the $140 I made yesterday selling my bicycles, $290. I just put some gas in my motorcycle so that’s more like $250 actually.

I am very fortunate to be staying with my mum at the moment, so the rent, utilities and food are all covered for now. I am still $1,100 short for the month!

Why did I put myself in such an extreme situation? Because I don’t like having money sitting on my account. So when I had about $5,000 earning me no interest back in July, I overpaid a loan at 7%, to get a 7% return on my money. I was, after all, getting my flat’s sale money in September! Only when that fell through, I realized how short in cash I actually was.

I am not too worried, since I have some cash in the UK that I do keep for an emergency in my other rental property. So worst case scenario, I can pay the exchange rate and get those Sterling in Euros. The other solution is to ask my mum, and to refund her next month when one of my CDs expires.

I am expecting my income to be pretty low for the next few months so I will try not to reinvest that CD straight away and keep some cash for basic expenses to come, lesson learned!

Planning for a secure financial future is a wise decision that you should make for your family. You need to be committed to building wealth and take charge of your money. By investing in the right ... END_OF_DOCUMENT_TOKEN_TO_BE_REPLACED

Cryptocurrency has become a popular investment option in recent years, as more people want to make profits from its white-hot rise. However, cryptocurrency investment is a risky endeavor. It is highly ... END_OF_DOCUMENT_TOKEN_TO_BE_REPLACED

Unsurprisingly, there are plenty of people out there jostling to help you spend your nest egg. All promise high returns, but not all that many deliver; in fact, you can quickly lose your super if ... END_OF_DOCUMENT_TOKEN_TO_BE_REPLACED

If you have recently taken up a position at a brand-new company and opened a 401k for the first time, you may be on the hunt for additional information when it comes to the various ways in which tax ... END_OF_DOCUMENT_TOKEN_TO_BE_REPLACED

Congratulations! You’ve worked hard this year. You made it through some tough days (or weeks or months). And now, if you’re lucky, you might end up with a holiday bonus. But before pocketing that ... END_OF_DOCUMENT_TOKEN_TO_BE_REPLACED

The United States of America is a destination most working professionals and travellers have on their list. Being one of the most visited countries in the world, it houses many tourist attractions, ... END_OF_DOCUMENT_TOKEN_TO_BE_REPLACED