Because I am so organized (/sarcasm), I already had my post lined up with the recap of the past two weeks, but on Friday night we were hit by a big storm. It had been a really hot and heavy week, the poor guys working on the land development tracing the plots were exhausted and sunburned, and we were all looking forward to the weekend. We had a swim around sunset, and the wind started to blow, so instead of drying our clothes on the deck we left them in the hammocks and went back to the house. It started blowing some more, so I went down to the deck to pick up the clothes, and the hammocks were bouncing heavily, all the clothes had been thrown into the water.

It was already dark, so I went into the water but could only gather part of the clothes and a towel, and thought I would pick up the rest in the morning. But after 20 minutes of more heavy winds, BF went down to the deck to check on the boat, and found it dangerously bouncing, threatening to break the deck we had just fixed. That is the boat before, with its lovely wooden seats and coffer. 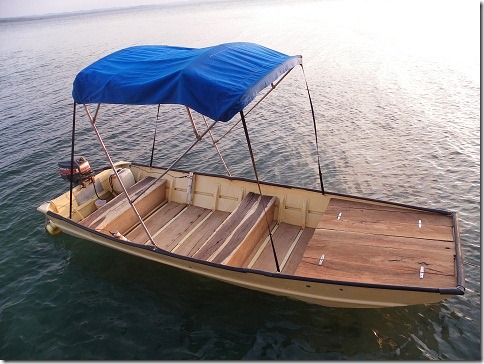 He screamed to me to get down there and help him get the boat onto the land, but it was too late, the boat was full of water and really heavy, after diving both into the water with big wages, we set it free from its ropes and barely managed to get it a little more towards the land. This is how we found it in the morning. 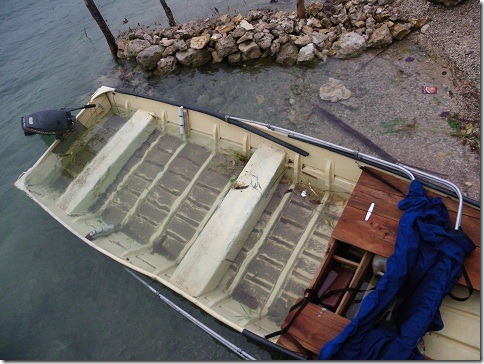 This in front of the boat is a seat that was washed by the lake. We couldn’t take off the motor because it was screwed in. 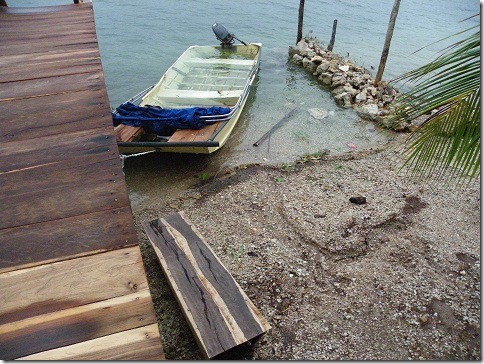 and we could only save the gas tank at night, the rest of the wood was also washed by the water. In the morning we woke up early to gather what was nearby, managed to find a few clothes, the motor oil bottles and some wood, but we are still missing many things. Thankfully BF’s fishing box was intact, just filled with water, and his cane was stored safely.

On the deck we un-hung the hammocks but a few things were broken too.

While we were in the water trying to get the boat back to land, the power ran out. It took 24 hours to get it back, and we will have to eat like giants this week to try and not waste food that was thawed during the power cut.

In the morning we did an inspection of the roof terrace, it was filled with water and some of the plastic roof had been uprooted by the wind. 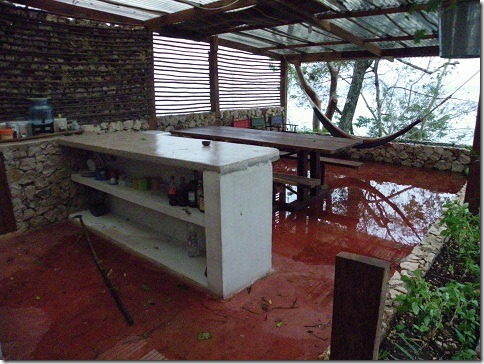 We had also planted some new trees, and palm trees we brought over from the land development, not sure they will survive. 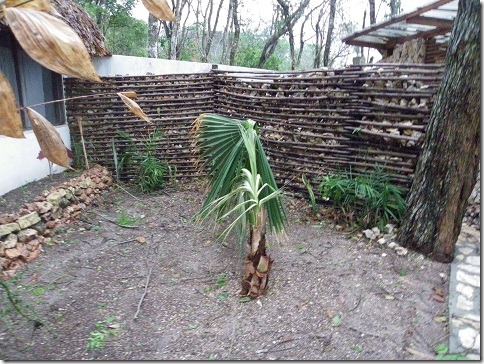 One of the big trees at the back of the  house broke as well, thankfully it didn’t touch the roof 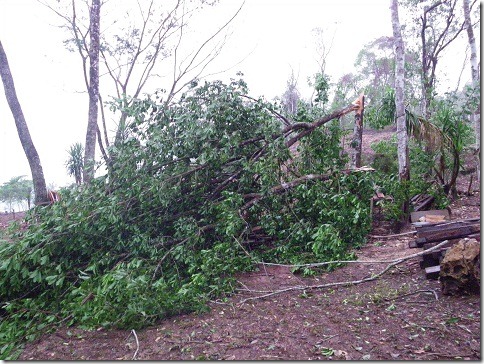 Our neighbor now has a bare land and this accelerated the wind from behind and helped break our tree.

The little house we took so long to fix up lost three panes of its plastic roof, which was really impressive. 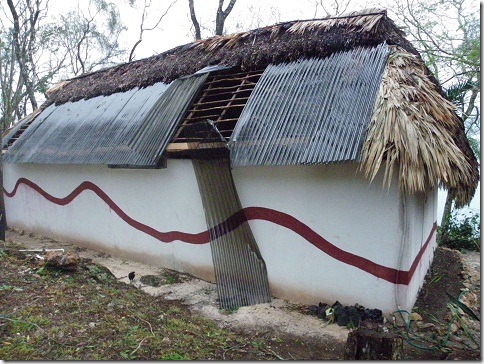 But those plastic tiles are very strong and on Saturday morning with the help of the land workers who came over we were able to put it back into shape and attach it to the roof again. 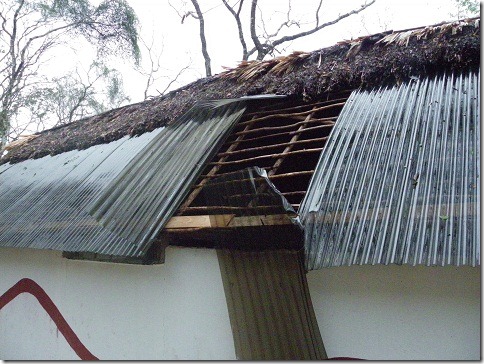 It had been raining in the kitchen all night, and another part in one of the bedroom was open also, so we have a wet mattress and a disgusting house to tackle.

All in all, it will take a few more hours to fix the garden and the boat, but it was more of a big scare than anything. We slept like babies in the new room, by the way. The wind kept the night heavenly cool and the sturdy construction was not a concern.

It was weird and unexpected because this is not a hurricane zone, unlike Belize or the Caribbean coast, and even weirder was that nearly no damage happened in the village. One guy lost his roof and that was about it. It looks like we were at a junction of strong opposite winds, and it created a mini tornado just for us. Nice way to start the week!

In case you wonder, of course, we don’t have home insurance, but the financial damages aren’t too important.

As usual, when sh*t happens, I try to find three good things about it:

1. No animal was hurt. Three chicks, the ducks, geese and turkeys sleep outside, but it looks like everyone found a safe place to spend the night.

2. In a week or so, I am leaving for Europe and BF to the capital city, it would have been much worse if we weren’t there. We have built a room for the handyman to sleep there in our absence but by himself I doubt he would have done much.

3. We managed to save the deck. Had the boat kept on banging against it, it could have collapsed, and there is a lot of work in there, plus the cost of the thatched roof and wood to build it up again, it would have been a nightmare.

This week the architect is coming to formally draft the plots and we have a ton of work, so by the time you read this we will have spent the whole weekend cleaning to be ready.

That’s it for now, have a good week!

Planning for a secure financial future is a wise decision that you should make for your family. You need to be committed to building wealth and take charge of your money. By investing in the right ... END_OF_DOCUMENT_TOKEN_TO_BE_REPLACED

Cryptocurrency has become a popular investment option in recent years, as more people want to make profits from its white-hot rise. However, cryptocurrency investment is a risky endeavor. It is highly ... END_OF_DOCUMENT_TOKEN_TO_BE_REPLACED

Unsurprisingly, there are plenty of people out there jostling to help you spend your nest egg. All promise high returns, but not all that many deliver; in fact, you can quickly lose your super if ... END_OF_DOCUMENT_TOKEN_TO_BE_REPLACED

If you have recently taken up a position at a brand-new company and opened a 401k for the first time, you may be on the hunt for additional information when it comes to the various ways in which tax ... END_OF_DOCUMENT_TOKEN_TO_BE_REPLACED

Congratulations! You’ve worked hard this year. You made it through some tough days (or weeks or months). And now, if you’re lucky, you might end up with a holiday bonus. But before pocketing that ... END_OF_DOCUMENT_TOKEN_TO_BE_REPLACED

The United States of America is a destination most working professionals and travellers have on their list. Being one of the most visited countries in the world, it houses many tourist attractions, ... END_OF_DOCUMENT_TOKEN_TO_BE_REPLACED