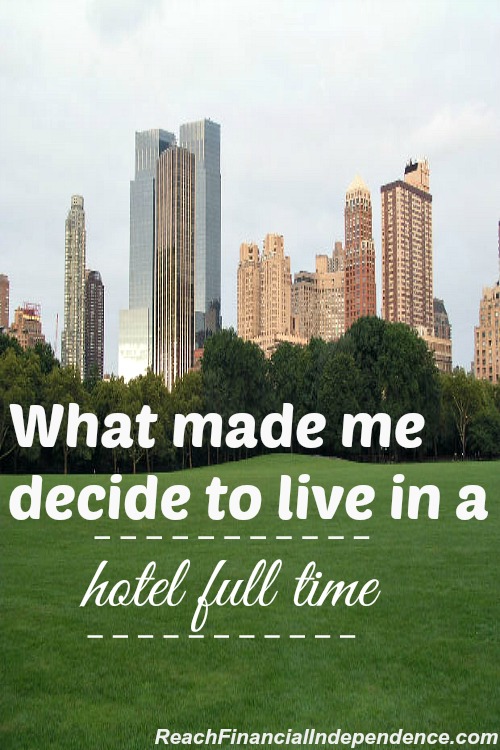 I lived about a block from Central Park, Manhattan (pictured above)

Good morning! Today I have a post from mochimac, a personal finance blogger at “Save. Spend. Splurge.” mochimac got out of $60,000 of debt in 18 months. She now lives in a hotel full-time, and works a lot less for a lot more money as a freelancing consultant.

Please contact me if you would like to guest post on RFI.
About 6 months into my job right out of college, I decided that I would live in a hotel full-time and travel.

I came to this decision when I had signed a 12-month lease for an apartment that was very close to the actual office I thought I would be working in. 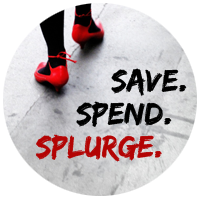 For the first month or so, I was taking the bus to work and getting there in about 15 minutes, even with rush hour, it was fantastic!

My apartment was great too, about 1200 square feet, 4 closets which I immediately filled with clothes and things, and plenty of light, air and space. It was pretty much a dream apartment overlooking a gorgeous forest right off my balcony.

…then I got staffed on a project in the middle of nowhere, and realized that I would be commuting to another city via an airplane each week (Monday) and returning late afternoon (Friday), only to be too exhausted to do anything but flop on a bed at around 9 p.m. at night.

Saturdays were reserved for buying some groceries just for the weekend as I wouldn’t be in the apartment all week, and my Sunday was prepping to fly back out at 3 a.m. on a Monday morning to be at the client site for an 8 a.m. start. 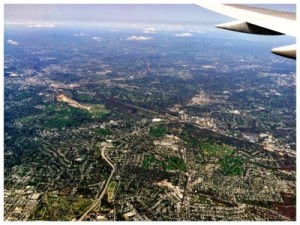 PAYING THOUSANDS OF DOLLARS FOR AN EMPTY PLACE

It was not a life that I had envisioned.

I had a lovely apartment, fully decorated to the nines and a relaxing oasis, but I was so fatigued, slightly stressed out from a new job and more than that, $60,000 in debt from student loans and annoyed that I wasn’t even living in this perfect apartment about 70% of the time.

Then I came up with what I thought was a brilliant idea – Why didn’t I just live in the cities where I worked in a hotel? I could prove how much cheaper that would be to pay for a hotel (plus food) on the weekends for me to stay there rather than fly back each week, and I could give up my apartment.

I was already living out of a carryon suitcase full of things, it became very clear to me that I didn’t need about 99% of the stuff I had in my beautiful apartment for 70% of the time.

The client would love it because I could be there early Monday without any flight delays, and I wouldn’t be rushing off on a Friday to catch my flight back home.

I would also be less fatigued, be able to walk to work and I’d have 100% of my basic expenses paid for : shelter (at the hotel), food (per diem given each day), and I’d only have to cover my personal expenses. Even my cellphone was paid for.

That is when I decided to live full-time in a hotel and have been doing that ever since.

I’ve met other consultants along the way (about 2) who have quietly admitted that they did the same thing when they were singletons. I guess I wasn’t the only one with that idea!

There are even other consultants I’ve observed on my travels who do this with their entire families, and their wives don’t work, and just live in the hotel, taking care of their kids while they go to work.

GIVING UP 90% OF MY STUFF WAS EASIER THAN I THOUGHT

Once I gave up my apartment, I also realized I’d have to put everything in storage or sell it, so I sold every piece of furniture and major appliance I had (couch, coffee table, TV, etc), and put the rest of my things in storage.

All that I had left was about a storage bin’s worth of boxes filled with clothes and other things. I took out a full-sized suitcase of exactly what I would need other than kitchenware, and experimented living with just that, full-time at a hotel.

I tried it out for a year, and loved it.

It was a bit tough at the start when I wanted to reach for something that I thought I had (like a mug), but realized it was still packed away, but I made a list and learned how to make do with what I had.

I managed to save about 90% of my net income and funneled it all into debt with my new creative way of living, and cleared $60,000 in 18 months.

A little while later, I quit my corporate job and became a freelancer, which quadrupled my income and helped me clear the last $15,000 of my debt in 2 weeks, but that’s another story.

TURNING INTO A NOMADIC MINIMALIST FULL-TIME

When I came off the project, I didn’t exactly have a place to move back to, so I just continued living in a hotel while I waited to be staffed on another project.

It became expensive because I wasn’t used to paying for anything, but it certainly motivated me to ask for more work as soon as possible.

I also learned where to go to live for the interim (apartment-style hotels are the best), and realized I could negotiate lower monthly rates with them rather than daily or weekly ones.

Throughout all of this, I contemplated what it meant to have all this stuff that I didn’t even use, and concluded that I didn’t need what I thought I did.

I turned into a minimalist because I thought: “If I could do this for a year, couldn’t I at least get rid of all the excess baggage (literally) and do this as a lifestyle for the rest of my life?”

Who is to say I can’t live my whole life with a few suitcases, even if I have kids?

And that’s where I started thinking about living with less as real way of life.

I didn’t set a limit on how much I could own, but I did want to be able to move with just one trip in a car, so that became my guideline of what I could keep and what I had to sell, donate or toss.

Now that I’m a freelancer, I still live full-time in a popular hotels (save for a few years when I traveled and basically haven’t worked much because I didn’t want to).

I travel to the cities where I need to work, and living in a hotel actually ends up being a cheaper, hassle-free option as a consultant than if I were to keep a full-time apartment and travel from there.

Of course, the one time I stayed in Manhattan about a block from my work site, was rather expensive at $5000 a month coming out of my pocket, but it wasn’t for a long period of time.

Sure, it isn’t as easy to accumulate junk and it can be frustrating at times, but at least I don’t have that weekly commute of flying cross-country, and I can be at the office in about 15 minutes or less (while walking no less!) most of the time.

My life has turned into finding out what is truly necessary to live a fulfilling and happy, and to live with less. The struggle still continues to some extent but as I meander through life, it is becoming clearer what makes me happy.

this post was featured on Financial Uproar, thank you!

Congratulations! You’ve worked hard this year. You made it through some tough days (or weeks or months). And now, if you’re lucky, you might end up with a holiday bonus. But before pocketing that ... END_OF_DOCUMENT_TOKEN_TO_BE_REPLACED

The United States of America is a destination most working professionals and travellers have on their list. Being one of the most visited countries in the world, it houses many tourist attractions, ... END_OF_DOCUMENT_TOKEN_TO_BE_REPLACED

When you were a kid, did you ever save quarters in a jar? Or set aside a portion of your allowance in a piggy bank for a big purchase, like a bicycle, a pair of designer shoes, or anything that mom ... END_OF_DOCUMENT_TOKEN_TO_BE_REPLACED

No matter where you are in your career, the potential of eventually retiring can be a daunting experience to think about. Are you saving enough for the future? If you are, when will you have enough ... END_OF_DOCUMENT_TOKEN_TO_BE_REPLACED

“Open an account with us – and get a free toaster!” These days, the bank toaster (clock radio, electric blanket, or other gadget) has become a cliché for consumer banking. But what you might ... END_OF_DOCUMENT_TOKEN_TO_BE_REPLACED

Watermelon. Corn-on-the cob. Fireworks after sundown. Amid all the fun, it’s easy to forget that the Fourth of July is more than just another summertime barbecue: It’s a reminder that independence is ... END_OF_DOCUMENT_TOKEN_TO_BE_REPLACED