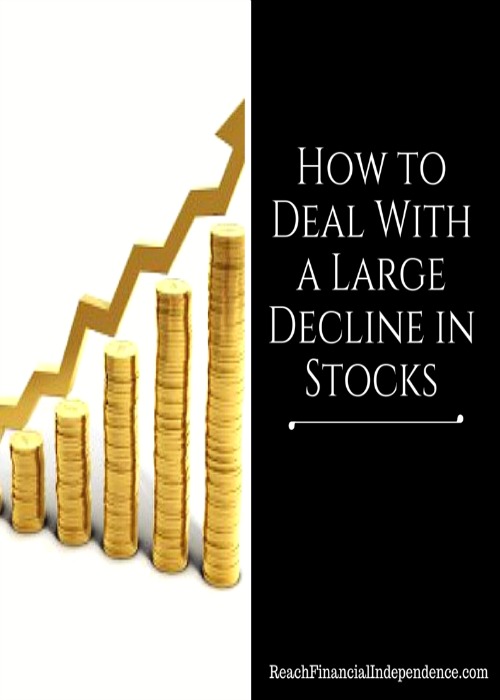 Hi there! Today I am having Tony from InvestingOnTrack.com. Let me know if you would like to submit a guest post.

Although I do not think that the U.S. stock market will enter into a bear market this year, there is a big chance of a large decline. I mentioned my reasons in a post titled Why the U.S. Stock Market is Making a Big Top. The main reasons are as follows:

So while you probably don’t want to dump all your stocks because we are still in the midst of a bull market, you probably do want to shift your exposure to protect yourself from the coming decline in equities. Here’s how you can do that.

During large market declines it’s best to invest in large cap stocks whose stock prices fall less. The good news is that a lot of large cap stocks pay hefty dividends. There is a reason for this correlation: large cap stocks tend to be companies that are no longer experiencing strong growth, which means that these companies don’t need to retain most of their earnings for massive expansion. That’s why large cap companies like AT&T pay out larger dividends compared to the average growth company. As long as the company continues to pay high dividends, the dividends will offset some of your capital gains losses during the market crash.

As a side note, you should beware of small cap stocks that pay high dividends. No matter how “large” these dividends are, they will not equal to 20% of the stock price. The capital losses will vastly exceed your dividends during a large market drawdown because small cap stock prices rise fast but also tank fast.

Let’s first clear up a common misconception: gold is not a safety haven. Precious metals crashed just like every other asset during the 2008 financial crisis. The only true safety haven (market that rises in a financial crisis) is the U.S. dollar. Even though some people say that the dollar is going straight to hell because of currency depreciation, it still is relatively safer compared to other currencies like the Euro and the Yen.

A lot of investors own assets that are denominated in foreign currencies. During a big correction, the U.S. dollar soars and other currencies tank. Thus, switching to U.S. denominated holdings will protect the portion of your portfolio that was previously exposed to this foreign exchange risk.

I’m not a big believer in diversification when the market is rallying and the going is good. Steve Jobs was a huge believer in focus: you can only achieve greatness if you focus on a few things. By concentrating his portfolio on the hottest tech stocks during the late 1990s, famed trader Dan Zanger (check out his Wikipedia page) turned $10,000 into $18 million. And no, that was not a typo.

However, there is a time for diversification, and that is when the overall market turns south. If you have all your money in 2 companies and one of them goes bankrupt, you’ve just lost a huge chunk of your portfolio. Warren Buffett said that the first rule of investing is “do not lose money” and the second rule is “follow rule #1”. It take a 100% gain to make up for a 50% loss. Focus on capital preservation during large market declines.

Planning for a secure financial future is a wise decision that you should make for your family. You need to be committed to building wealth and take charge of your money. By investing in the right ... END_OF_DOCUMENT_TOKEN_TO_BE_REPLACED

Cryptocurrency has become a popular investment option in recent years, as more people want to make profits from its white-hot rise. However, cryptocurrency investment is a risky endeavor. It is highly ... END_OF_DOCUMENT_TOKEN_TO_BE_REPLACED

Unsurprisingly, there are plenty of people out there jostling to help you spend your nest egg. All promise high returns, but not all that many deliver; in fact, you can quickly lose your super if ... END_OF_DOCUMENT_TOKEN_TO_BE_REPLACED

If you have recently taken up a position at a brand-new company and opened a 401k for the first time, you may be on the hunt for additional information when it comes to the various ways in which tax ... END_OF_DOCUMENT_TOKEN_TO_BE_REPLACED

Congratulations! You’ve worked hard this year. You made it through some tough days (or weeks or months). And now, if you’re lucky, you might end up with a holiday bonus. But before pocketing that ... END_OF_DOCUMENT_TOKEN_TO_BE_REPLACED

The United States of America is a destination most working professionals and travellers have on their list. Being one of the most visited countries in the world, it houses many tourist attractions, ... END_OF_DOCUMENT_TOKEN_TO_BE_REPLACED