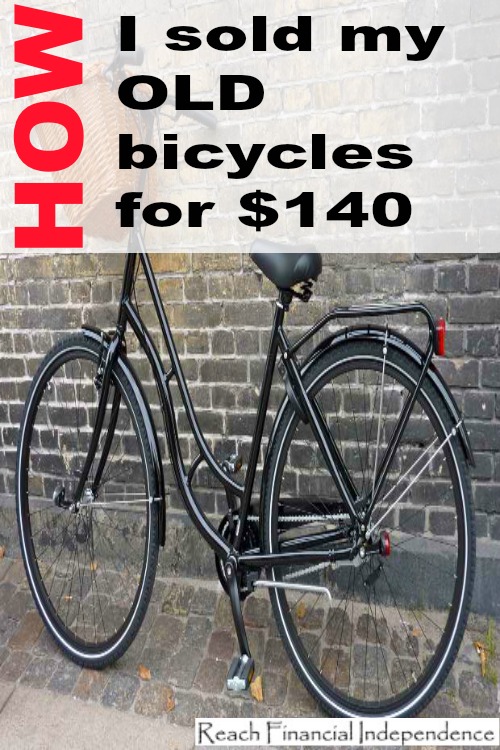 Isn’t that a crazy price for two old, very used bicycles? I know! They were just rotting in my mum’s storage last week, I now I have $140 cash in my pocket!!

It was a little bit of work, because I had to repair them and pimp them up a little, so that they look palatable for a prospective buyer. One had a broken brake, and the other one had a few minor repairs to perform too.

To be honest, I doubted that someone would want to buy the bikes, but I did the work anyway, thinking I would donate one to charity if it didn’t sell, and the other one to my brother.

While I was repairing them, I tried to think like a buyer. I wouldn’t want to try a dirty bike, and think about all the people who used it before me. So I cleaned them and oiled the chain too, on top of the repairs. It doesn’t cost much, and can get you a higher price, or odds to sell.

Then I looked online what those kind of bikes were selling for. Not much on Ebay or the local Craigslist. I thought that I would ask about $40 for each of them. Then my mum told me the local fair was held this Saturday and the cycling association was hosting a used bikes sale, where they would determine a price with me, and keep 10% if they sold the bike.

This was a great opportunity, not only because when I got there, the guy told me I could set a price of $70 for each bike, but also because people who come and buy there can totally trust that the experts from the cycling association will give them an honest review of the bike. They jotted down what was wrong with mine, like the weak brake or the faulty light. Everything was displayed for the customer to be informed, and buy accordingly.

When I came back at the end of the day, both bikes had been sold! I regret not having brought more stuff at the sale, like books or clothes, so many people were buying like crazy! Next time I de-clutter my house, I will definitely try to sell those items first, instead of throwing/donating, the cash is nice! I had pretty bad experiences selling online, and I think face to face is time consuming but can get you a higher return.

Check the community calendar for garage sales, community fairs, and other events were you could get a stand and start selling your stuff

Look online for a fair price to ask, or your stuff won’t sell

Make your stuff look its best! Clean your clothes, remove stains on items and furniture, oil your bicycle, and so on. Your effort will be rewarded with extra money!

Bring some change or you will have to round your price down.

Have a charity in mind in case your stuff doesn’t sell, and drop by that charity right after the sale, to avoid re-cluttering your house. You can use Freecycle too.

Planning for a secure financial future is a wise decision that you should make for your family. You need to be committed to building wealth and take charge of your money. By investing in the right ... END_OF_DOCUMENT_TOKEN_TO_BE_REPLACED

Cryptocurrency has become a popular investment option in recent years, as more people want to make profits from its white-hot rise. However, cryptocurrency investment is a risky endeavor. It is highly ... END_OF_DOCUMENT_TOKEN_TO_BE_REPLACED

Unsurprisingly, there are plenty of people out there jostling to help you spend your nest egg. All promise high returns, but not all that many deliver; in fact, you can quickly lose your super if ... END_OF_DOCUMENT_TOKEN_TO_BE_REPLACED

If you have recently taken up a position at a brand-new company and opened a 401k for the first time, you may be on the hunt for additional information when it comes to the various ways in which tax ... END_OF_DOCUMENT_TOKEN_TO_BE_REPLACED

Congratulations! You’ve worked hard this year. You made it through some tough days (or weeks or months). And now, if you’re lucky, you might end up with a holiday bonus. But before pocketing that ... END_OF_DOCUMENT_TOKEN_TO_BE_REPLACED

The United States of America is a destination most working professionals and travellers have on their list. Being one of the most visited countries in the world, it houses many tourist attractions, ... END_OF_DOCUMENT_TOKEN_TO_BE_REPLACED