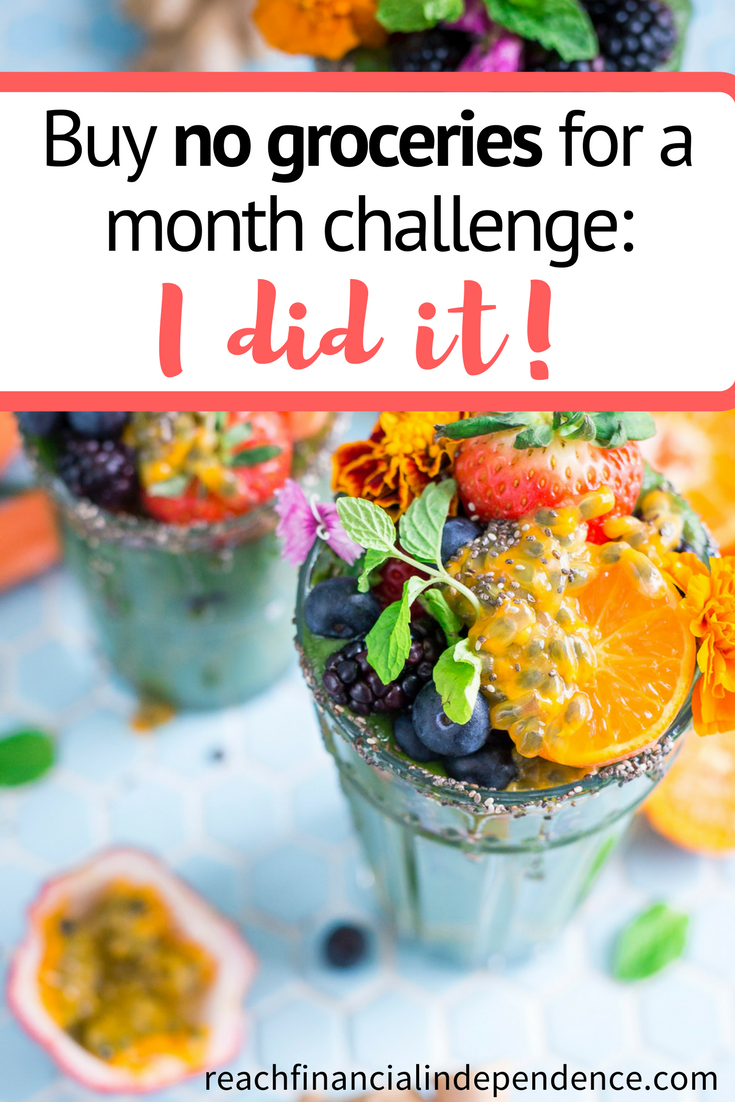 I am was on a challenge to buy no groceries except fruits and vegetables for a full month. I decided to enter the challenge after I’d gone back home to the jungle, mostly because I hate going shopping all the time (on a normal month I last 10-15 days between supermarket runs) and also because I’m only here for a month, and my house is hot and humid, so products go bad quicker than usual.

So far the first two weeks, I only bought about $10 worth of fruits and veggies, hoping they’d last through the rest of the month.

The third week was miracle week, as two groups of Airbnb guests checked out leaving behind a ton of goodies. The first group left two bottles of wine, half a bottle of vodka, and ice. The second group left lemons and beers. Seriously.

They also left a few sausages, refried beans, which I eat for breakfast, usually made from scratch, so they saved me time and effort, and a whole lettuce. As I was done with mine, having a fresh one was awesome, and helped me avoid the store one more week.

And as I was wondering what life without mayo may look like, they also left me a tub of mayo! Even though it was the light, olive oil healthy version, I was super happy.

Without the guests’ gifts, I would probably have needed a lettuce, and while at the shop, gone for a few fruits as well. I also didn’t go through my stockpile as quickly as I thought because of all the goodies. And beer + Ritz crackers might have been an acceptable dinner menu a few times since the start of the challenge..

I was looking forward to a fresh supply of fruits and veggies for week 4, as my diet had become pretty boring. But I decided to go traveling at the end of the month, and the food supplies were enough to last me until then, calories wise. Buy more, and I would waste part of it, or have to give it away. So I made do with what I had.

Plus, my fridge broke, so for a few days it acted barely as a cooler, and I didn’t want to add more food to spoil in there.

I made it through the month with one $10 fruit and vegetables refill. I would have gone with two had I not gone traveling at the end. The fridge had never looked so empty. 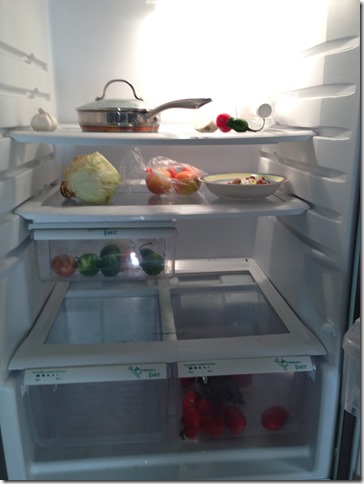 Dry goods: I still have a lot, but most of it won’t spoil when I go traveling. I can keep tackling that when I come back. I even have a bit of flour that I kept in case I had bread withdrawal syndrome, and managed to make do without it. 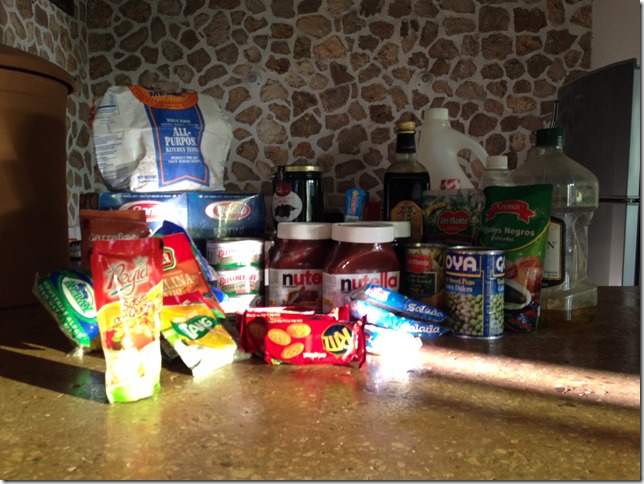 Frozen stuff: The meat is all gone, bacon, turkey breasts, some sweet and sour duck I’d kept since August, and the half pound of beef. I had 5lb of shredded cheese, which I went through almost every day (cheesy fries, yum!), but that was too much, so the cheese still remains. 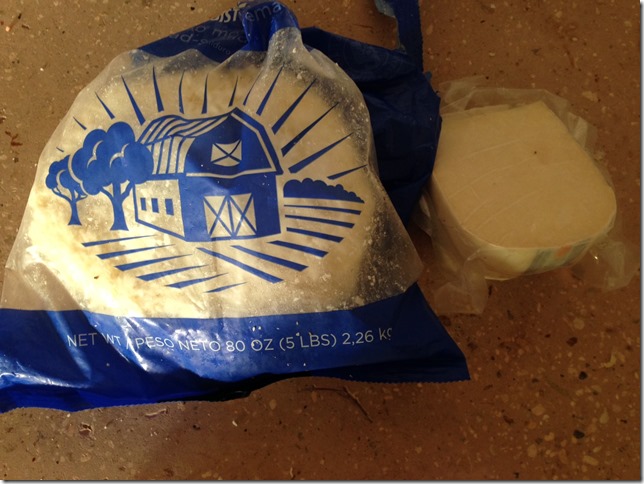 I can now close my house and turn off the fridge and freezer, taking just the cheese with me, and saving a bit on utilities while I am away. Usually I keep the deep freezer on and one fridge, so that’s quite a bit of electricity there.

Fresh food: As I leave tomorrow, I only have a few veggies, and the tub of mayo that magically appeared after guests left. No more eggs, OJ, cream cheese… I think I did pretty well considering I didn’t have these travel plans at the beginning of the month. I’ll give it all to my staff to avoid waste. 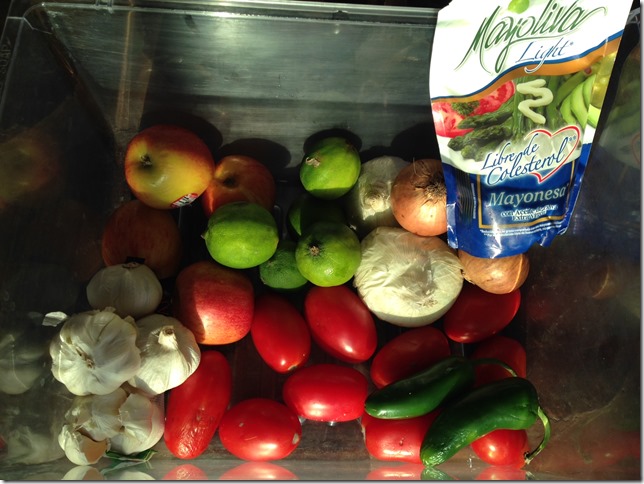 Overall, this challenge has helped me get creative with the food I had, like when I had guests, and the major win is to be able to turn off the fridge and freezer for the next two months. But I missed the healthy veggie based diet I’m used to having. So the lesson here is I should stop hoarding, buy meat and dry goods for 2 weeks tops, which is usually the maximum amount of time I spend without going to the shops. And if I spend longer, shop local, my village only has the basics at a 25% mark-up, but it will do for a few days. Having no coupons or other incentive here, stockpiling is not a good idea, as everything spoils with the heat and humidity.

Congratulations! You’ve worked hard this year. You made it through some tough days (or weeks or months). And now, if you’re lucky, you might end up with a holiday bonus. But before pocketing that ... END_OF_DOCUMENT_TOKEN_TO_BE_REPLACED

The United States of America is a destination most working professionals and travellers have on their list. Being one of the most visited countries in the world, it houses many tourist attractions, ... END_OF_DOCUMENT_TOKEN_TO_BE_REPLACED

When you were a kid, did you ever save quarters in a jar? Or set aside a portion of your allowance in a piggy bank for a big purchase, like a bicycle, a pair of designer shoes, or anything that mom ... END_OF_DOCUMENT_TOKEN_TO_BE_REPLACED

No matter where you are in your career, the potential of eventually retiring can be a daunting experience to think about. Are you saving enough for the future? If you are, when will you have enough ... END_OF_DOCUMENT_TOKEN_TO_BE_REPLACED

“Open an account with us – and get a free toaster!” These days, the bank toaster (clock radio, electric blanket, or other gadget) has become a cliché for consumer banking. But what you might ... END_OF_DOCUMENT_TOKEN_TO_BE_REPLACED

Watermelon. Corn-on-the cob. Fireworks after sundown. Amid all the fun, it’s easy to forget that the Fourth of July is more than just another summertime barbecue: It’s a reminder that independence is ... END_OF_DOCUMENT_TOKEN_TO_BE_REPLACED