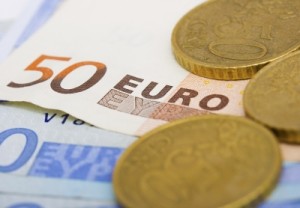 Easter week was kinder to the euro than the two that had gone before. The single currency strengthened by nearly a cent against the pound and by one and a quarter US cents in currency exchange markets. Its performance over the last month looks less sparkling: down by two cents against sterling and one against the dollar.

The euro’s upward correction was largely a result of no new disasters in Italy or Cyprus. There is still no government in Rome and apparently little chance of forming one. President Giorgio Napolitano has not yet given up trying but he is running out of time; his term of office expires in two weeks’ time. Nevertheless, investors have had more than a month to get used to the idea of a second election and the concept no longer scares them.

They have had nearly as long to become accustomed to the Cyprus bailout and in that direction, too, they are no longer frightened. Concerned, yes, but not shocked as they were a fortnight ago. Some of that increased relaxation comes from a comment by European Central Bank President Mario Draghi at his monthly press conference. Sig. Draghi distanced himself from the sequestration of Cypriot bank deposits, saying “that was not a smart move”. He also contradicted Eurogroup President Jeroen Dijsselbloem, who a week earlier had said the Cypriot bailout model would provide the template for any future rescues. As far as the ECB president is concerned; “Cyprus is no template”.

Not everything said by Sig. Draghi was helpful to the euro though. He revealed that the Governing Council had had an “extensive” discussion about lowering the 0.75% Refinancing Rate and was considering “non-standard measures”, assumed to mean bond purchases. As for the Euroland economy, whilst the ECB expects to see a return to growth in the second half of the year there are “downside risks”.

Those risks were evident in some of the week’s euro zone economic data. Purchasing managers’ indices (PMIs) for the manufacturing sector showed a shrinkage in activity across the board, with the pan-Euroland reading a point lower on the month at 46.8 (only numbers above 50 indicate growth). It was a similar story for the services sector with the exception of Germany, which managed to scrape into the growth zone with a 50.9. Euro zone unemployment reached 12 % and retail sales were down by -1.4% in the year to February,

For sterling the PMI data were a game of two halves. On Tuesday the manufacturing PMI improved by half a point to 48.3 but fell short of expectations and therefore disappointed investors. Two days the later the services PMI delivered a positive surprise. At 52.4 it was half a point better on the month and a point and a half higher than the best Euroland reading which is all the more reason to use moneycorps money transfer abroad service.

Also helpful to sterling was the Bank of England’s Monetary Policy Committee, not for what it said or did but for what it didn’t. The minutes of the previous two meetings had shown the governor and two other members voting to extend the asset purchase programme while five voted against. Investors had been wondering if two of the dissenters might have changed sides in April: there was a relief rally when it turned out that they had not.

The coming week brings little in the way of top-tier economic data from either the UK or Euroland. For sterling the most interesting will be Tuesday’s balance of trade and production figures. For the euro the most depressing will be Greek unemployment on Thursday.

Unsurprisingly, there are plenty of people out there jostling to help you spend your nest egg. All promise high returns, but not all that many deliver; in fact, you can quickly lose your super if ... END_OF_DOCUMENT_TOKEN_TO_BE_REPLACED

If you have recently taken up a position at a brand-new company and opened a 401k for the first time, you may be on the hunt for additional information when it comes to the various ways in which tax ... END_OF_DOCUMENT_TOKEN_TO_BE_REPLACED

Congratulations! You’ve worked hard this year. You made it through some tough days (or weeks or months). And now, if you’re lucky, you might end up with a holiday bonus. But before pocketing that ... END_OF_DOCUMENT_TOKEN_TO_BE_REPLACED

The United States of America is a destination most working professionals and travellers have on their list. Being one of the most visited countries in the world, it houses many tourist attractions, ... END_OF_DOCUMENT_TOKEN_TO_BE_REPLACED

When you were a kid, did you ever save quarters in a jar? Or set aside a portion of your allowance in a piggy bank for a big purchase, like a bicycle, a pair of designer shoes, or anything that mom ... END_OF_DOCUMENT_TOKEN_TO_BE_REPLACED

No matter where you are in your career, the potential of eventually retiring can be a daunting experience to think about. Are you saving enough for the future? If you are, when will you have enough ... END_OF_DOCUMENT_TOKEN_TO_BE_REPLACED