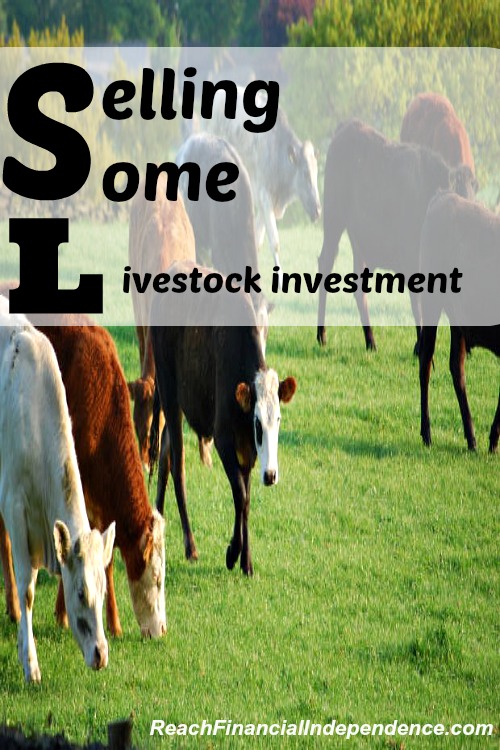 It is almost time to sell my last 56 heads of cattle! I am not really happy about it, since the profits were really great and it has been a totally passive investment, but the pasture at the ranch is getting scarce and keeping the calves longer may mean that they lose weight by not eating enough.

We may head to the ranch this week to sell the cattle. The good news it the price of livestock is up, I sold last September at $0.8/lb and this time the buyers offered $0.89, a 10.9% increase. To project how much to expect from the sale, I have been looking at the numbers from last year, when I sold 50 heads in total.

I held 3 heads for 9 months, after which BF bought them back from me to keep breeding as bull, they were strong, beautiful animals, that he wanted to keep to have the best race possible. Not all the bulls are mixed with the cows, only the ones you want to reproduce. Otherwise, the bulls would spend all day going after the cows, exhausting both animals (they would lose weight, not good for $$) and you would have no control over race. My 50 calves were kept separate from everyone, so they got to eat the best pasture, and be less vulnerable if a disease spread. None of the 150 animals I  have held over the past 2+ years have died. Mortality is high for the first 9 months when they are still on milk but after they can still get sick. We only gave them an anti-parasite shot twice a year.

The majority I kept for 13 months, and a dozen came from an earlier deal that I bought 22 months ago, and weren’t big enough the last time I sold.

You can read more about the full details of the deal here, to make it short I bought the animals without weighting them, at the age of 9 months, when they wean and weight an average of 400lb. The price was $253, or $0.63/lb, a bit higher than the $0.57/lb the grown animals were selling for meat at the time. This is a standard price and BF had an offer from local farmers at that price.

Then we went half way on the profit, since I put the capital and he provided the ranch, cow boys to supervise and the medicine shots. Once we weight, I get back my $253 and half of the profit. Here are the numbers from 50 heads I sold last year.

You can see the oldest ones I kept for 22 months sold for up to $680, while the younger ones went for around $450. The first one got fat really quick and BF bought it back after 9 months (18 months of age that is) at a weight many of his brothers didn’t reach after 13 months (22 months of age).
It is hard to tell how an animal will fare but they roughly put on a pound a day, until they are 3 years old. Then they are of adult age and the weight curve slows down. The average on my lot is 0.94lb/day.
I wish I could keep the livestock until they are 3, the younger ones are barely 2, but I need the cash to put on the 90 acres land development and from now until September with the rain season and the cold it is likely they won’t put on much weight anymore.

Important considerations that won’t make all cattle investments that good

– BF owns the ranch and his payroll did not increase because I kept the livestock there.

– I bought only males. Cows have the advantage of reproducing but lose a lot of weight when they do and for the 9 months they feed their little ones. Once they get too old they aren’t worth much even for meat.

– Over 30 months the price of livestock increased 57% from $0.57 to $0.89/lb, apparently thanks to Mexico who had a shortage and heavily imported from Northern Guatemala. Drug lords are said to have played a part by using cattle trucks to smuggle drugs, sometimes even inside the poor animals, this I don’t know for a fact, it may be a tale from the local farmers.

– Apart from making fancy spreadsheets, the only time I spent overseeing this investment was a few hours checking the scale while the cattle was weighted and taken away, BF dealt with his employees for all the rest. It took less time than stock picking, and was a real passive investment. Most livestock deals aren’t that hands off.

Have you ever thought about livestock investments?

This post was featured on the Carnival of Passive Investing, PF Digest, The Money Principle, thank you!

Planning for a secure financial future is a wise decision that you should make for your family. You need to be committed to building wealth and take charge of your money. By investing in the right ... END_OF_DOCUMENT_TOKEN_TO_BE_REPLACED

Cryptocurrency has become a popular investment option in recent years, as more people want to make profits from its white-hot rise. However, cryptocurrency investment is a risky endeavor. It is highly ... END_OF_DOCUMENT_TOKEN_TO_BE_REPLACED

Unsurprisingly, there are plenty of people out there jostling to help you spend your nest egg. All promise high returns, but not all that many deliver; in fact, you can quickly lose your super if ... END_OF_DOCUMENT_TOKEN_TO_BE_REPLACED

If you have recently taken up a position at a brand-new company and opened a 401k for the first time, you may be on the hunt for additional information when it comes to the various ways in which tax ... END_OF_DOCUMENT_TOKEN_TO_BE_REPLACED

Congratulations! You’ve worked hard this year. You made it through some tough days (or weeks or months). And now, if you’re lucky, you might end up with a holiday bonus. But before pocketing that ... END_OF_DOCUMENT_TOKEN_TO_BE_REPLACED

The United States of America is a destination most working professionals and travellers have on their list. Being one of the most visited countries in the world, it houses many tourist attractions, ... END_OF_DOCUMENT_TOKEN_TO_BE_REPLACED