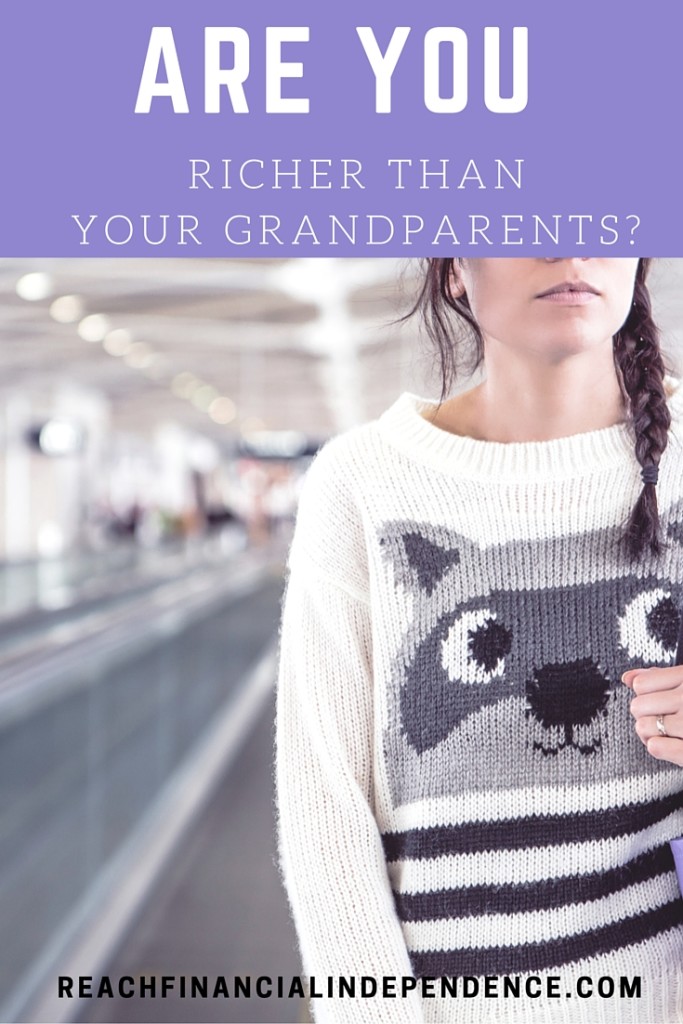 I talked recently about how your grandparents or the generation before were probably not making as much money as you do now, but also had fewer needs, because they were vastly self sufficient. They grew their own food, built part or all of their house, sew their clothes, and so on.

As a result, they were able to save a large part of their income, and if they had borrowed for a house, pay it off in less than 10 years.

There is now a disproportion between the value you produce at your job, and what you can buy. For example, in my village, people still grow their own corn, as part of their base diet. They need a patch of land to grow the corn, which they own or rent for the season, then they go sow, supervise, harvest, and dry the corn. Eventually, they pluck it so they can store it for the year, and feed themselves and their animals. They eat tortilla corn for all three daily meals, and their chickens and pigs eat corn too, so you would think it makes sense to grow your corn. Except corn, plucked and dried, is worth $0.12 a pound.

Growing your own corn does not require that you work every day, but it is time intensive and you are taking the risk that the crop will get bugs, or a natural disaster will reduce it to zero. Working as an unskilled worker to get the 4,000 lbs of corn you need every year would require you to work just over two months. The other 10 months can be spent earning enough for your other expenses, which in my village are very few, most people build a simple house with their bare hands and only have to pay for electricity if they are even plugged to it, $2 for water rates, and the rest is to enhance their diet a bit, buy phone credit and other consumer goods they didn’t need one generation ago.

Which brings me to my point. Today, one hour of your labor buys much more than it used to. Your grandparents had to spend several hours each month to gather, chop, store and dry firewood to cook and heat their house, today, you can work for a couple of hours and have enough to pay your electric bill.

But the younger generation put away about £60 a week less…

How is that possible? We make more, and we save less, something is wrong there. First, you could blame our laziness. We work less hours than our grandparents used to (in France, the workweek has been reduced to 35 hours, with 5 weeks of holidays as a minimum) and yet when we go home we want to crash on the couch and eat overpriced convenience food. We want bigger houses even though we are having less children. We want an iAnything and new clothes every season when they used to buy make a new costume every 5 years.

Sure, had we never evolved we would still be living in a cave, and some items have become necessities. Who would want to spend 20 hours a week hand washing clothes and dishes when a machine can do that in a fraction of the time? Who can do without a computer when so many jobs and opportunities are being found online? When you can fly across the ocean for a few hundred dollars why not enjoy it, who cares if your grandparents never left the country?

But if you look a bit more closely, there are things you don’t need. Things that are such poor quality they’ll break on the first use. Junk food with so may chemicals your health bill will be through the roof in your 50s if you keep eating them. The yearly car replacement…

You want to aim for the financial stability your grandparents have in their retirement, so try looking at the lifestyle they lived and realize how easy we have it those days, so there is no excuse to send a good chunk of your income into those retirement and investing accounts.

Are you better off than your grandparents? Why or why not?

This post was featured on the Starting from Zero, The Frugal Farmer, My Wealth Desire, thank you!

Planning for a secure financial future is a wise decision that you should make for your family. You need to be committed to building wealth and take charge of your money. By investing in the right ... END_OF_DOCUMENT_TOKEN_TO_BE_REPLACED

Cryptocurrency has become a popular investment option in recent years, as more people want to make profits from its white-hot rise. However, cryptocurrency investment is a risky endeavor. It is highly ... END_OF_DOCUMENT_TOKEN_TO_BE_REPLACED

Unsurprisingly, there are plenty of people out there jostling to help you spend your nest egg. All promise high returns, but not all that many deliver; in fact, you can quickly lose your super if ... END_OF_DOCUMENT_TOKEN_TO_BE_REPLACED

If you have recently taken up a position at a brand-new company and opened a 401k for the first time, you may be on the hunt for additional information when it comes to the various ways in which tax ... END_OF_DOCUMENT_TOKEN_TO_BE_REPLACED

Congratulations! You’ve worked hard this year. You made it through some tough days (or weeks or months). And now, if you’re lucky, you might end up with a holiday bonus. But before pocketing that ... END_OF_DOCUMENT_TOKEN_TO_BE_REPLACED

The United States of America is a destination most working professionals and travellers have on their list. Being one of the most visited countries in the world, it houses many tourist attractions, ... END_OF_DOCUMENT_TOKEN_TO_BE_REPLACED