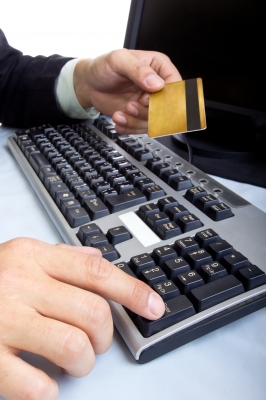 I remember when I was a kid, I had lots of games that required imagination, and one of my favorite was playing with fake money. I had a purse, and a wallet, complete with printed plastic cards that looked like real credit cards. They had animals printed on it and they were more like the kind you collect until you have them all, but they were perfect to pretend pay at my pretend shops. It was never about credit though. All my fake money was in a safe and I was regularly paying creditors as well. Such simple games can really help kids get a head start with their finances.

Money can be a game, with strong value behind it. For example, you can give your kids fun personalized personal checks, but behind it there is still real money that needs to be carefully considered before your kid spends it.

You don’t start creating those games on your own. My parents must have planted a seed early on, because rather than dolls and castles, I always wanted to play shopkeeper. My sister was my main customer, and to this day, she is less entrepreneurial and money oriented than I am. I have to thank my parents though for giving us both a strong financial education.

Can you imagine living in a world where parents never tell you about money? In my own little childhood world, it was impossible, because my parents put emphasis on us knowing the price of things. They would tell us how hard they had to work so we could go on holiday, how buying us X would prevent us from getting Y, and how waiting for another six month meant we could afford Z.

We would be allowed to buy something only if we had saved for it. As teenagers, we could get new clothes but if we wanted the fancy kind, we had to pay for the markup with our pocket money.

My parents also never stopped talking about the day we would be independent, and made it pretty clear that it would be around 18. When I was left on my own at 17, during my freshman year of college, I had only a small scholarship to pay for all my expenses. Thankfully, tuition was cheap, but I had learned the value of money, and credit was not an option. I took odd jobs, worked hard, and even managed to graduate with savings.

The little money games of my childhood, for as insignificant as they may seem, played a big part in making me the financially sound adult that I am today. So if you have kids, seriously make it a point to teach them about money, they will thank you later.

Planning for a secure financial future is a wise decision that you should make for your family. You need to be committed to building wealth and take charge of your money. By investing in the right ... END_OF_DOCUMENT_TOKEN_TO_BE_REPLACED

Cryptocurrency has become a popular investment option in recent years, as more people want to make profits from its white-hot rise. However, cryptocurrency investment is a risky endeavor. It is highly ... END_OF_DOCUMENT_TOKEN_TO_BE_REPLACED

Unsurprisingly, there are plenty of people out there jostling to help you spend your nest egg. All promise high returns, but not all that many deliver; in fact, you can quickly lose your super if ... END_OF_DOCUMENT_TOKEN_TO_BE_REPLACED

If you have recently taken up a position at a brand-new company and opened a 401k for the first time, you may be on the hunt for additional information when it comes to the various ways in which tax ... END_OF_DOCUMENT_TOKEN_TO_BE_REPLACED

Congratulations! You’ve worked hard this year. You made it through some tough days (or weeks or months). And now, if you’re lucky, you might end up with a holiday bonus. But before pocketing that ... END_OF_DOCUMENT_TOKEN_TO_BE_REPLACED

The United States of America is a destination most working professionals and travellers have on their list. Being one of the most visited countries in the world, it houses many tourist attractions, ... END_OF_DOCUMENT_TOKEN_TO_BE_REPLACED