All eyes are on the economy as we loom ever closer to the start of 2018, and the year that Britain’s future trading relationship with the European Union might be agreed. A key barometer for predicting the state of Britain’s economy is the strength of the pound. A strong Pound signals investor confidence in the UK assets, trade and future growth prospects.

During Theresa May’s premiership, the Pound has consistently fallen in value against the Euro. Meanwhile, against the US Dollar, Sterling has risen somewhat throughout the year. To determine how much of this has been driven by Theresa May’s speeches, we have analysed their immediate impact upon the value of the pound.

Large fluctuations can be seen as May makes some of her most famous speeches, including a recovery in the pound versus the dollar following the announcement of her premiership. But just how much of this is really down to May? In turbulent times, she’s faced a somewhat unstable US political ecosystem, which has seen the dollar decline against all its main rivals throughout 2017.

Take a look at the data; how much do you think May’s influence has had over the British Pound? 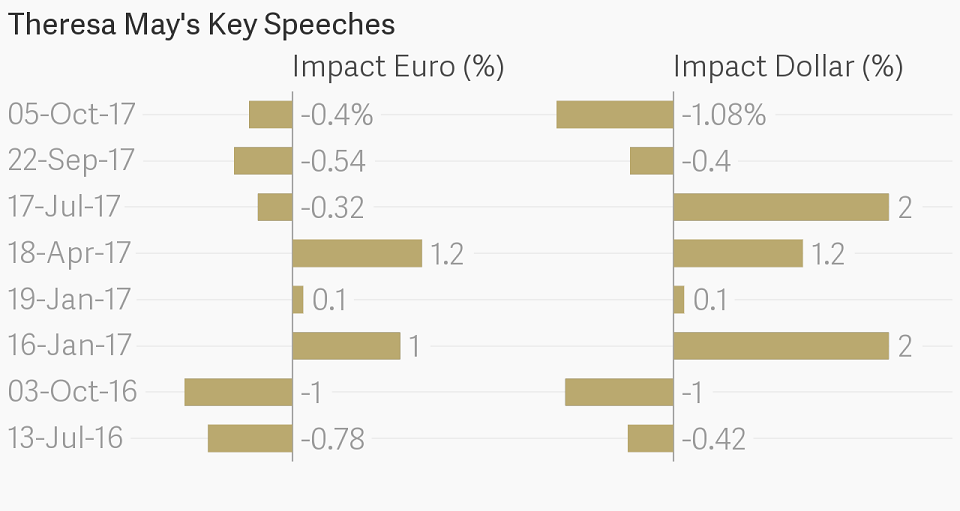 Here’s a little more commentary on the impact of each of Theresa May’s speeches.

The week after the UK voted to leave the EU, the pound hit 31-year lows against the dollar but by the announcement of her premiership, it had recovered to trade at $1.32. The fact that Theresa May had supported the Remain campaign was welcomed by investors.

This was Prime Minister May’s first speech outlining her plans for Britain’s exit from the European Union. The pound rose 2% against the US Dollar and climbed to €1.14 against the Euro.

While outlining her timetable for starting Brexit negotiations, the pound fell to a three-year low against the Euro by over 1% to €1.14 but it had recovered very slightly by late evening. Meanwhile, the pound reached its lowest rate against the US Dollar since July 2016, falling by almost 1% and reaching $1.2797.

At the Lancaster House Speech where Theresa May revealed her plans for Brexit, sterling advanced across the board, climbing by over 1% against all the majors (and over 2% against the US Dollar).

Theresa May’s speech in Davos, Switzerland, gave the Pound a boost, reaching a midday high of $1.2336 against the dollar. By the end of the day, it had settled below $1.23.

This speech confirmed that the Prime Minister would present a motion to the House of Commons, calling for snap General Election. Initially the Sterling dropped significantly but had pulled higher by more than 1.2% to trade at $1.27, its highest since December 2016.

After the Prime Minister outlined her proposal for a two-year implementation period of Brexit, the Pound ended the day down 0.4% against the dollar, while it decreased by 0.54% against the Euro, reading €1.1310

In the wake of Theresa May’s keynote speech at the Conservative Party Conference, the Pound dropped by 0.4% against the Euro.

ETX Capital Senior Market Analyst Neil Wilson had this to say: “Theresa May’s speeches outlining her government’s approach to Brexit clearly have a big impact on the pound’s short-term movements. But longer term her words matter less than what’s happening on the ground in the Brexit negotiations.

“Furthermore, the biggest impact on the pound is the relative performance of its two biggest peers – the dollar and the euro. Forex is a zero-sum game. The dollar’s been sliding all year against its major peers, giving a lift to sterling. Meanwhile the euro has rallied for most of 2017 as the ECB moved closer to unwinding its giant stimulus package, leaving the pound trailing against the single currency.”

Planning for a secure financial future is a wise decision that you should make for your family. You need to be committed to building wealth and take charge of your money. By investing in the right ... END_OF_DOCUMENT_TOKEN_TO_BE_REPLACED

Cryptocurrency has become a popular investment option in recent years, as more people want to make profits from its white-hot rise. However, cryptocurrency investment is a risky endeavor. It is highly ... END_OF_DOCUMENT_TOKEN_TO_BE_REPLACED

Unsurprisingly, there are plenty of people out there jostling to help you spend your nest egg. All promise high returns, but not all that many deliver; in fact, you can quickly lose your super if ... END_OF_DOCUMENT_TOKEN_TO_BE_REPLACED

If you have recently taken up a position at a brand-new company and opened a 401k for the first time, you may be on the hunt for additional information when it comes to the various ways in which tax ... END_OF_DOCUMENT_TOKEN_TO_BE_REPLACED

Congratulations! You’ve worked hard this year. You made it through some tough days (or weeks or months). And now, if you’re lucky, you might end up with a holiday bonus. But before pocketing that ... END_OF_DOCUMENT_TOKEN_TO_BE_REPLACED

The United States of America is a destination most working professionals and travellers have on their list. Being one of the most visited countries in the world, it houses many tourist attractions, ... END_OF_DOCUMENT_TOKEN_TO_BE_REPLACED