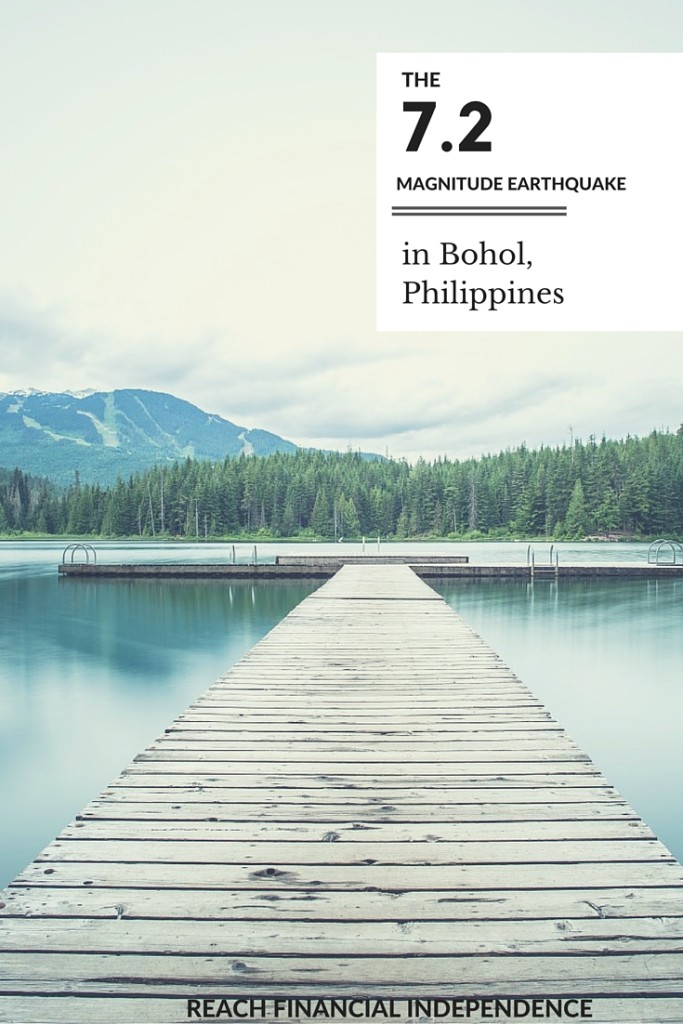 Good morning! Today my lovely VA Clarisse will talk about the big earthquake that just happened in her country, the Philippines. This is her first post, please join me to welcome her!

I am over at Make Money Your Way, we continue with our series about making money online and talk about how you can save time managing your ad deals.

On Monday I will be hosting the Carnival of Personal Finance, you can submit a post here, see you!

Tuesday October 15 at 8:12 in the morning as I was working in front of my laptop, I felt my chair slowly moving and at first I thought I may have gotten dizzy, but when I looked at the headset’s wire it was moving too!

And then I yelled to my younger sister that it is an earthquake, she was studying at that time and my daughter was lying on our couch. I was so panicked that I could hardly move and didn’t even gather the courage to go to my daughter, I just remained petrified watching our things that kept moving stronger and stronger.

My brave younger sister hugged my daughter that was crying at that time. When some of our things started falling, I stood and I tried to hold my mother’s electric sewing machine because the quake kept growing stronger! I heard our doors slamming and I saw our chandeliers swaying, my heart was bouncing as we had never experienced such a strong earthquake before!

After four minutes I think the earthquake stopped, I was simply thankful that we were safe and without major damages. I hurriedly searched the internet to locate the epicenter of the quake. And here is a picture below that shows Bohol and Cebu City as the most affected areas. 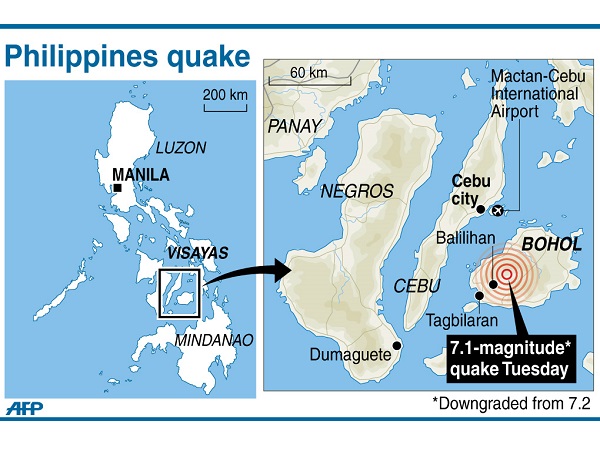 It’s heartbreaking to see some of the historic places and especially some old churches collapsed due to the strong tremor.

Thankfully, the kids were out of school during the tragedy, because of the regular holiday in our country in observance of Eidul Adha or the Feast of Sacrifice for the Muslims.

One of the most important historic churches is the Basilica Minore del Santo Niño in Cebu City, it was founded in 1565. That is where the oldest Señior Sto. Niño can be found and where the Sinulog feast is celebrated every January, when lots of tourists and pilgrims come to visit. As you can see on the picture below, the facade of the church was totally damaged as well as the bell tower. 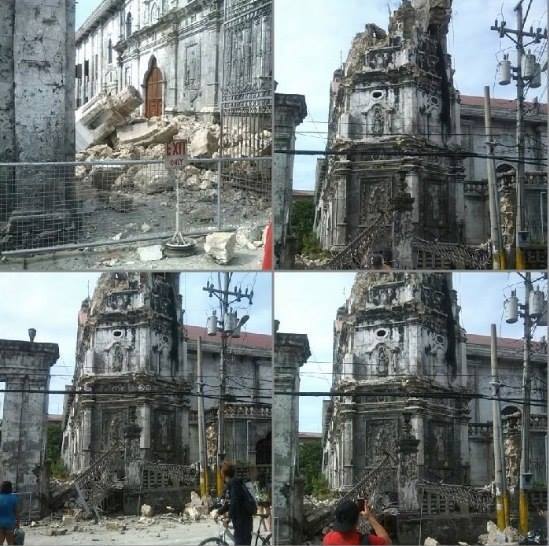 In the updated list there are ten historical churches that were damaged because of the 7.2-magnitude quake. But the most damaged church was the Church of San Pedro Apostol in Loboc, Bohol that sadly totally collapsed. 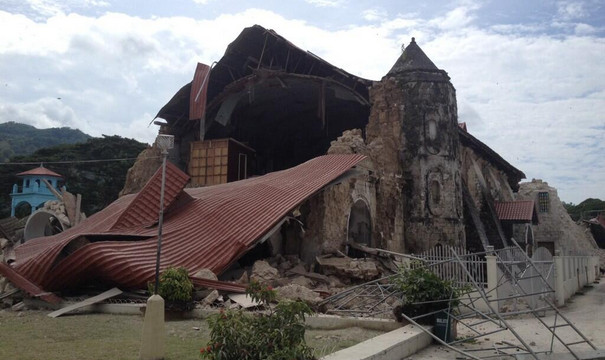 Even the top tourist destination in our country widely known as Chocolate Hills in Bohol was affected by the strong quake. As you can see the Chocolate Hills was malformed because of the intensity. 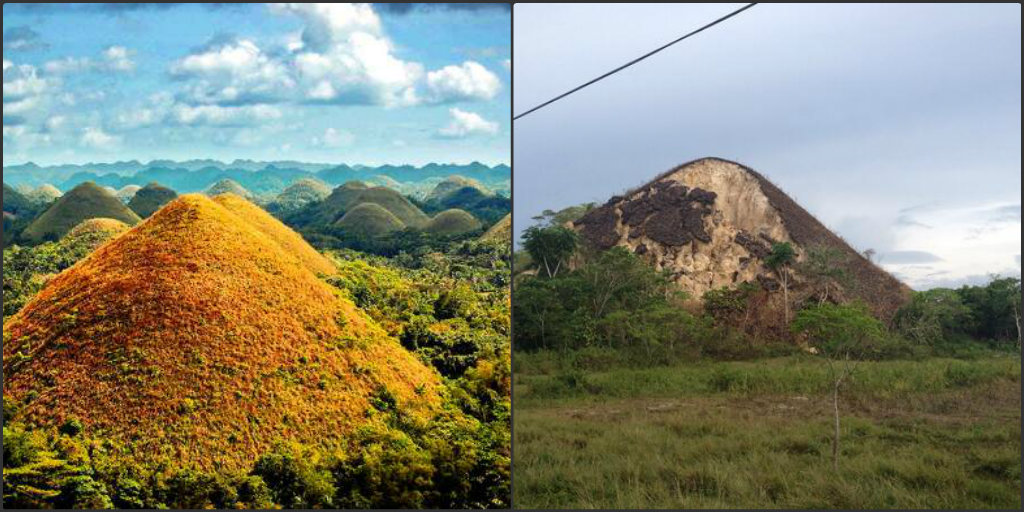 During the earthquake the roads cracked and the houses collapsed. Hospitals, schools, public markets, buildings and establishments were damaged too. It was reported that there were 107 people killed in the tragedy that happened on Tuesday and 276 people were injured in the tremors, 166 of whom were from Bohol, 106 from Cebu, 3 from Siquijor and 1 from Negros Oriental.

They also stated that the earthquake that happened on Tuesday was stronger than the Haiti earthquake of 2010 that killed an estimated 100,000 to 150,000 people. The Philippine Institute of Volcanology and Seismology (Phivolcs) compared the 7.2-magnitude earthquake to 32 Hiroshima Atomic Bombs, it has hundreds of aftershocks that can last for a week.

I hope my country will soon recover this very sad tragedy and face a new tomorrow.

Editor’s note: As I have been traveling, I have been staying away from the news and only learned about the earthquake when Clarisse mentioned it. I was grateful nothing happened to her and her family but really sad to see all the deaths and destruction. We have our fair share of earthquakes in Guatemala, I have felt some temblors before but nothing of that magnitude. Four minutes must seem like an eternity.

Planning for a secure financial future is a wise decision that you should make for your family. You need to be committed to building wealth and take charge of your money. By investing in the right ... END_OF_DOCUMENT_TOKEN_TO_BE_REPLACED

Cryptocurrency has become a popular investment option in recent years, as more people want to make profits from its white-hot rise. However, cryptocurrency investment is a risky endeavor. It is highly ... END_OF_DOCUMENT_TOKEN_TO_BE_REPLACED

Unsurprisingly, there are plenty of people out there jostling to help you spend your nest egg. All promise high returns, but not all that many deliver; in fact, you can quickly lose your super if ... END_OF_DOCUMENT_TOKEN_TO_BE_REPLACED

If you have recently taken up a position at a brand-new company and opened a 401k for the first time, you may be on the hunt for additional information when it comes to the various ways in which tax ... END_OF_DOCUMENT_TOKEN_TO_BE_REPLACED

Congratulations! You’ve worked hard this year. You made it through some tough days (or weeks or months). And now, if you’re lucky, you might end up with a holiday bonus. But before pocketing that ... END_OF_DOCUMENT_TOKEN_TO_BE_REPLACED

The United States of America is a destination most working professionals and travellers have on their list. Being one of the most visited countries in the world, it houses many tourist attractions, ... END_OF_DOCUMENT_TOKEN_TO_BE_REPLACED