This time of month again, straight to the point, let’s have a look at my October goals… 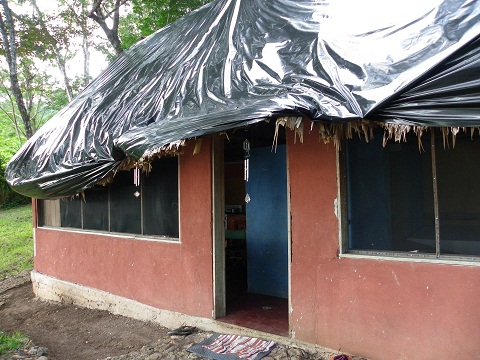 My main goal is to make my house a home.

Goals for October were

Stop smoking: ahem ahem… some days were better than other. Still a November goal.  FAIL

Spend less than $150 on going out: I was pretty good with that one, and spent $128. Paris is so expensive but due to good weather I was able to have picnics outside with my friends instead of eating in. PASS

Finish my mum’s living room deep cleaning: I postponed that one until mid-October but eventually washed all the walls and painted the ceiling. The result is quite nice, and my back hurt for a couple of days after painting the ceiling, though it was really worth it. One happy mum. PASS

Apply for short term jobs: I did and even went to three interviews, the first two said I was overqualified, the third, the person didn’t show up so I left after 20 minutes. Instead of finding a job, I booked an earlier flight to Guatemala to start working on the land. Let’s call it a PASS

Have gravatars and threaded comments work: Thanks to some helpful guidelines from Veronica at Pelican on Money I was able to find the files to change, thought I was smart enough to change them myself, broke my site, got a big scare and was able to backup. Strangely, it worked. LUCKY PASS

Change the sidebars: I did that too 🙂 Inserted a bit of ads, added the last comments and the badge of Blogger Helping Bloggers, the support program I joined with my awesome mentor Jana from Daily Money Shot! It is still messy and not perfect, but better than before. PASS TO BE MADE EVEN BETTER SOON.

I wrote that while at 777K, current rank is 194,256. The speed has slowed when I moved to Guatemala and I see that it requires constant work, so I am expecting a probable loss for the next few days. PASS

Nope, still not good with that one! EPIC FAIL

I have gone above and beyond on that one, discovering a few nice sites on the way, and the results have been very positive in terms of getting acquainted to bloggers and have people come over to see my website. PASS

Overall a pretty good month considering I moved house and continent in between.

What? Wasn’t it an October goal… well, it’s still there. Not for long!

Zero waste on water and food.

Without electricity, food goes bad fast. And if I have to stock up for a week, I need to be organized. I can’t afford to waste water either since I carry it with buckets from the lake.

This will be my only sport for a while, except for lifting construction materials and furniture around. I love bathing but can get lazy at swimming.

I can’t afford to procrastinate all day like I did in Paris. I need to have enough time for my blog, while a house is being set up and built.

I am having a couple of issues with my theme, which is an old one so sometimes the formatting I see on WordPress will not be what will appear on the blog, and other little things that make navigation less optimal for you.

Get my Alexa ranking under 200K and stay there.

Actually I wrote this a couple of days ago, so I broke it today (Nov 4th), but want to stabilize now.

I am going easy on myself because a week into arriving, I don’t know what my routine is going to be like. In December I will have a clearer picture.

What about you? Tackling any big project in November?

Planning for a secure financial future is a wise decision that you should make for your family. You need to be committed to building wealth and take charge of your money. By investing in the right ... END_OF_DOCUMENT_TOKEN_TO_BE_REPLACED

Cryptocurrency has become a popular investment option in recent years, as more people want to make profits from its white-hot rise. However, cryptocurrency investment is a risky endeavor. It is highly ... END_OF_DOCUMENT_TOKEN_TO_BE_REPLACED

Unsurprisingly, there are plenty of people out there jostling to help you spend your nest egg. All promise high returns, but not all that many deliver; in fact, you can quickly lose your super if ... END_OF_DOCUMENT_TOKEN_TO_BE_REPLACED

If you have recently taken up a position at a brand-new company and opened a 401k for the first time, you may be on the hunt for additional information when it comes to the various ways in which tax ... END_OF_DOCUMENT_TOKEN_TO_BE_REPLACED

Congratulations! You’ve worked hard this year. You made it through some tough days (or weeks or months). And now, if you’re lucky, you might end up with a holiday bonus. But before pocketing that ... END_OF_DOCUMENT_TOKEN_TO_BE_REPLACED

The United States of America is a destination most working professionals and travellers have on their list. Being one of the most visited countries in the world, it houses many tourist attractions, ... END_OF_DOCUMENT_TOKEN_TO_BE_REPLACED